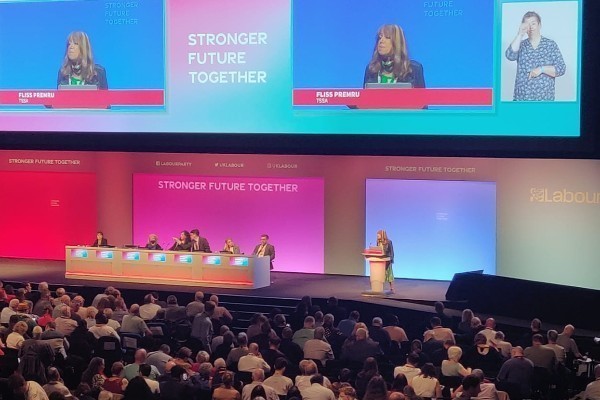 Fliss Premru from the TSSA union called for support for demonstrations on 6 November (Pic: TSSA on Twitter)

Yet that morning party leader Keir Starmer had already insisted Labour would not nationalise any of the “big six” energy companies. And delegates from two of Labour’s biggest union affiliates—Unite and the GMB—made sure support for fossil fuels and nuclear power also got through.

Support for the “socialist Green New Deal” motion was so strong that the conference passed it with a show of hands.

It went further than Labour’s leadership would have liked, including demands for “repealing all anti-union laws so workers can freely take industrial action over wider social and political issues, for industrial action to ensure action on climate change.”

But another motion—backed by the GMB, Unite and Community unions—explicitly called for support for a “green” gas industry and new nuclear power plants.

GMB general secretary Gary Smith said this was about protecting jobs. “We are never going to run away from a fight over our members’ jobs,” he said. “We are going to need gas for years to come.”

He added that “new nuclear is vital to our low carbon future.” And he called on shadow environment minister Ed Miliband to support new nuclear power plants.

Yet the majority of speakers in the debate supported the more radical motion and opposed the GMB’s. They included delegates from the FBU, CWU, and TSSA unions as well as Labour constituency party members.

Many rightly argued that action on climate change would involve creating new jobs and retraining workers in fossil fuel industries. Some also said that “supporting” fossil fuel and polluting industries meant relying on the bosses responsible for driving the climate crisis.

Hannah Taylor from Edinburgh Central branch, who supported the “socialist Green New Deal” motion, said, “Capitalism is incapable of solving the crisis it has created. Left to their own devices bosses will continue to extract profits, exploit workers, lobby governments to halt change.

“A just transition does not mean leaving workers behind but putting our class front and centre with retraining and funding to put skills and experience to best use in socially useful work.”

Unite union leaders used their delegates to try and get the pro-fossil fuels motion through by calling for support for both motions. Unite delegate Steve Turner said the GMB’s support for nuclear power was “spot on.”

In the end, the motion was sent to a “card vote,” where union delegates’ ballots make up half of the result. This motion also passed, with 59 percent in favour with the full breakdown set to be published on Monday.

Left wing delegates still celebrated the success of the more radical motion. But Starmer has already shown he will simply ignore it—just as he was filmed that morning ignoring a party member asking him to support a Green New Deal.

Labour also ignored a similar motion passed at its conference in 2019, which called for net zero carbon emissions by 2030.

Under pressure from the GMB, Labour dropped that from its election manifesto that year—and that was under the left wing leadership of Jeremy Corbyn.

Winning a society that breaks from fossil fuels will take far more than winning motions and relying on politicians.

Fliss Premru of the TSSA transport union said the fight for climate jobs and justice would be won “In industrial struggles and on the picket lines.

“Fighting senseless cuts on the railway. Proper funding for transport for London, and we also need to stop the funding for the Silvertown tunnel and put the money back into public transport.”

She added, “We must all join the Cop26 coalition for UK wide and global demonstrations on 6 November. Every day on the streets until we get climate justice.”

The real fight to stop climate catastrophe means putting those words into action.