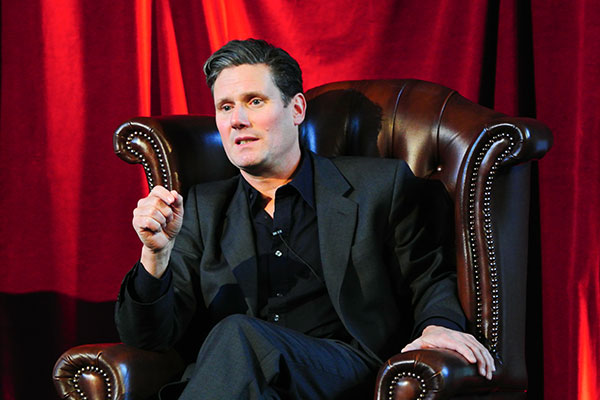 The Labour left suffered a landmark defeat at their party’s conference on Sunday.

The conference agreed to give party MPs more power to stop a left wing candidate ever standing for the party leadership again.

It is a big victory for Labour leader Keir Starmer in his drive to crush the left and marginalise party activists. And it was union leaders who handed it to him.

Labour left group Momentum said the change was passed because delegates from the Unison union voted for it. This tipped the balance in favour—outweighing the fact that almost all ordinary Labour Party members had voted against it.

In the debate, party members said Labour MPs wanted to deny them the chance to vote for a candidate they support.

And Megan Clarke from Warwick and Leamington CLP said, “The leadership may have called this to limit the ability of getting a left leadership candidate in the future. But this is not about left and right.

“This is about disrespecting the rights of hundreds of thousands of members and affiliate members who live in the communities that we want to serve.”

The successful change to the party’s rules increases the number of nominations from MPs a candidate needs to stand in a leadership election. This benefits the right as most Labour MPs oppose the left.

Shabana Mahmood MP said Labour leaders need “a sufficient base of support in the parliamentary Labour Party and the last few years have taught us that this is crucial.”

That’s because Labour MPs had spent the years of Jeremy Corbyn’s leadership working to undermine and sabotage him.

The few right wing party members who spoke were even more explicit. Sean Reilly from Ynys Mon said, “In 2015, if the threshold was slightly higher we could have avoided that entire antisemitism crisis that stained the Labour Party for six years.

“That makes these rule changes very much worth it in my book.”

“Go off and join the Socialist Workers.”

Right says ‘We are the mainstream now’

Right wing Labour members feel they’re finally on the front foot again for the first time since Jeremy Corbyn was elected leader in 2015.

At a rally by right wing faction Labour First on Sunday afternoon, organisers and fixers encouraged their supporters to keep turning the screw on the left.

“That’s what has given Keir Starmer the confidence to come forward with these rule changes,” he said. “Finally we are winning, and because of that Keir Starmer has put himself in a better position.”

Lloyd Duddridge, an organiser for the right wing faction Labour to Win, said, “We asked you to stay and fight. You did, and now we are winning that fight.

“Thanks for staying, thanks for fighting. Remember—we are the mainstream now.”

Now, after their victory on Sunday, the right is determined to go even further. “Today’s rule changes are about 10 percent of the rule changes we need to see,” Labour MP Patt McFadden told another right wing rally on Sunday evening.

“We’ve got to turn the page on what happened over the past five years.”

Meanwhile, left wing group Momentum tried to encourage its supporters that all was not lost. In an email, it said the left had won some motions at conference, including for a “socialist Green New Deal.”

But even then, it said activists still had to “keep building the pressure” for those to even appear in Labour’s manifesto.

Its plan of action is to slog away over “the next few years” trying to elect more left wing MPs, more conference delegates, and inside unions.

But many left wing members themselves see a bleak future.

One Labour activist, who didn’t want to be named, told Socialist Worker, “The right are on the front foot—they feel emboldened. You can see from this drive around the party leadership vote.”

He added, It’s difficult for the left in the Labour Party at the moment. A lot of us have been searching our consciences on should we stay or leave—what’s the right thing to do? I decided to stay in because I think we have to fight for the Labour Party.”

But, he said, the party machine is clamping down on left wing members. “I was expelled for posting a picture of a red clenched fist and a photo of a demonstration that included lots of different placards, including Socialist Worker ones. They said this showed support for a rival organisation.

“After legal help, I was reinstated. But I know of members who are changing their names and even wearing disguises on Zoom meetings. That’s how it is in the Labour Party at the minute.”

Concessions by the left were important A right wing campaign smeared the left as antisemitic for its opposition to Israel (Pic: Guy Smallman)

Labour’s conference also showed how the party’s left has been silenced by accusations of antisemitism.

Starmer and the right made sure they won a vote for an “independent” disciplinary process.

This was a key demand of the right who claim that Labour’s previous left wing leadership interfered and mishandled complaints of antisemitism. They say Corbyn’s welcomed and tolerated antisemites in Labour because of his opposition to Israel and support for Palestinians

In set piece speeches, right wing MPs Ruth Smeeth and Margaret Hodge spoke as if it was now a plain fact that Labour under Corbyn was riddled with antisemites. In fact, the number of antisemites in Labour was vanishingly small.

Hodge, who has said she views opposition to Zionism as a form of antisemitism, said, “Never again can we become a hostile environment for Jews.”

And Smeeth said, “Today we need to send a message to the vile racists and bullies who thought that our party could become a place for Jew hate.”

The underlying message was that anyone who opposed them would be guilty of supporting antisemitism.

Almost every speaker was in favour of the change. Only two delegates spoke against.

Hannah Dadd from Thornbury and Yale said, “It should be stressed that decisions that this body will be expected to take will be inherently political.

“What are the limits of acceptable debate in the Labour Party on a range of sensitive issues? What are the appropriate standards to expect of the state of Israel?

“Are the scope of the party’s positions on these matters to be determined by HR managers?”

Yet many more left wing Labour members were angry that the vote had passed with barely any dissent.

In a meeting organised by the left wing group Jewish Voice for Labour, some complained that organisations such as Momentum hadn’t prepared them to oppose it. Momentum instead focussed almost entirely on trying to defeat Starmer’s change to leadership elections.

One—who didn’t want to give her name—told Socialist Worker, “It was an ambush. No one knew this vote was going to happen.

“I’m in shock,” she added. “It was a very menacing atmosphere.”

One member told the meeting the atmosphere on conference floor was that “If you were opposing the new disciplinary measures you were antisemitic and racist, and it would be very difficult to get up and speak.”

Another, Peter, said, “So many of our members feel they can’t speak out because they will be accused of antisemitism as well.”

The silence of the left on the conference floor shows the success of the right’s strategy of demanding constant apologies from Corbyn has been successful.

With every apology and concession Corbyn made to their accusations of antisemitism, he gave ground to the idea that the left is to blame for antisemitism.

Rather than arm left wing members with the arguments to defend the right to criticise Israel, he gave the right the stick to beat his supporters with.

This not only made it harder to challenge the right, but also to criticise Israel.

Yet left wing Labour members have found that when they do stand up for Palestine, they can force the right to back down. Before conference, party officials tried to stop Young Labour from hosting a meeting with the Palestine Solidarity Campaign (PSC) because it was “controversial.”

Yet Jess Barnard of Young Labour told a PSC meeting on Sunday night how she stood her ground and forced the official to back down.

Now party members are pushing for the conference to back supporting sanctions against Israel, in a debate set to take place on Monday morning.