Labour shut Canada down once before – time to do it again! 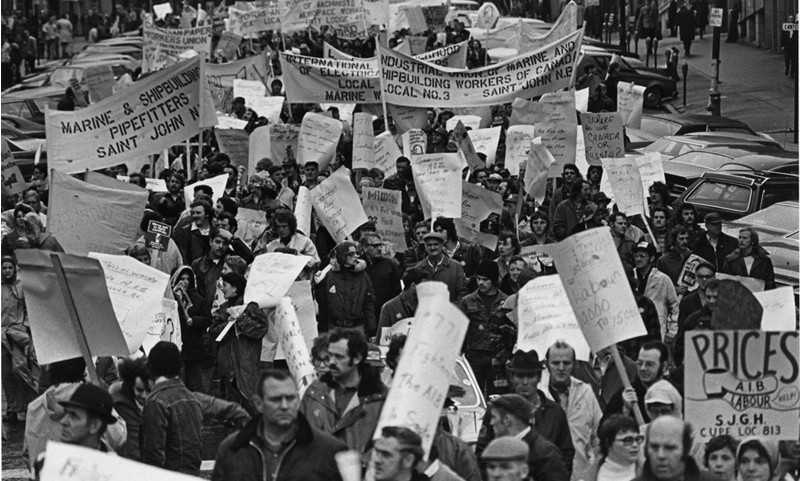 October 14 marks the 45th anniversary of the largest labour protest in this country’s history. On that day in 1976, one million workers put down their tools and walked out in protest in communities across Canada.

At issue was wage control legislation introduced by Pierre Trudeau’s Liberal government in December 1975, which limited pay increases for federal public employees and those in companies with more than 500 employees to 10 percent at a time when inflation was nearly 11 percent. Furthermore, the Anti-Inflation Act mandated that the wage controls were to be in place for the following three years during which time the limits on pay increases were reduced by another 20 then 25 and then 33 percent.

Trudeau had fought (and won) the 1974 federal election on the basis of opposing wage controls, which Robert Stanfield’s Conservatives were pushing. Yet less than a year and a half later, here was Trudeau implementing a version of wage controls that was arguably far worse than Stanfield’s proposal. (The Tories had argued for a 90-day freeze to “break the momentum” of inflation.)

Across Canada, workers correctly understood that the legislation constituted the worst attack on labour since the 1930s. Through it, the government suspended collective bargaining for all workers and forced deep cuts to their real wages. Public sector workers were hardest hit as many had desperately low wages at the time.

However, such a sharp and sweeping attack was catalyst for labour unity and militancy.

Trade union activists agitated the Canadian Labour Congress (CLC) and Quebec unions like the Confédération des syndicats nationaux (CSN) to fight back, pushing the labour leadership to organize a one-day general strike on October 14, 1976. Across the country, the Communist Party worked within trade unions and the social movements to mobilize the grassroots support necessary to build the strike.

The result was a screeching halt for much of the economy. Forestry, mining and auto manufacturing all completely shut down and, in many communities, pickets shut down transit and delivery services. Several towns and cities were completed shuttered, with all workers – even those in non-union workplaces – downing their tools.

The 1976 general strike is an event which people who were there still talk about, and it continues to inspire generations of workers who have come along since. It represents the deep level of engagement and mobilization necessary to build the class struggle – grassroots engagement, local labour council involvement and unity between workers in English-speaking Canada and Quebec and from the private and public sectors.

As we celebrate this important anniversary, in the context of another minority government which is dedicated to neoliberal austerity policies, let’s remember that the working class shut down the country once before and commit ourselves to doing it again!