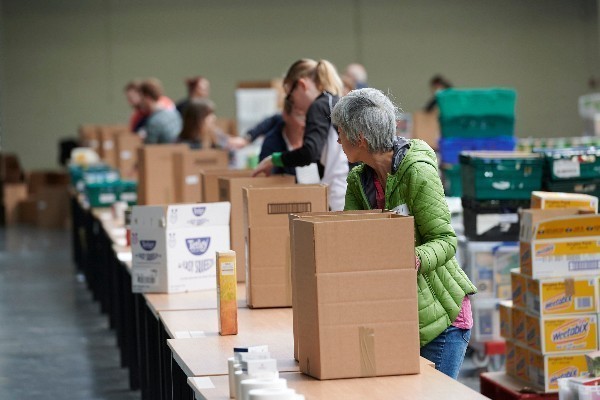 The benefits regime and low pay forces people to use foodbanks (Pic: Hammersmith and Fulham council on Flickr)

Keir Starmer’s Labour leadership has announced what it would do with the vicious Universal Credit (UC) system.

Labour’s old policy was to scrap the benefit which has lurched from crisis to crisis since it was first trialled in 2015.

But eager to show how much the party has changed since Jeremy Corbyn’s ousting, Labour’s welfare chief Jonathan Reynolds announced a different approach—the benefit will be “renamed”.

While millions of people face long payment delays, costly processing mistakes, and punitive penalties if they get a pay rise, Reynolds thinks a new name will help people to not feel “stigmatised”.

“I want the social security system to be viewed in the same way this country views state education or the NHS,” he said.

To be fair to the shadow secretary for work and pensions, he did say he would have a good look at the “taper rate”, which currently takes away 63p of UC for every £1 a claimant earns in a job.

But he stopped short of saying what Labour’s new taper rate would be, mumbling something about needing to do some sums nearer the time.

Meanwhile, the 2.3 million claimants and their families are waiting fearfully for next month’s Tory cut to the £20 a week pandemic “uplift”.

The cut will affect 6 million people and hurl at least 500,000 into poverty—many of them children.

That means some 1.9 million people in households with children will be affected by the reduction.

Reynolds says he is very angry about this, and Labour opposes the cut. But when quizzed on what a Labour government would do to reverse the cut, again, he could only mutter something about more sums nearer the time.

Reynolds told the Mirror newspaper, “The overall level of any benefit I can only set out before an election. I can’t give a specific commitment on that at this stage.”

Labour’s feeble response to the crisis surrounding UC will be no use to people such as Tracey.

She lost her job at the start of the pandemic and had to claim the benefit for herself and her young child.

“I had to take payment holidays on my loan and credit cards,” she told a reporter.

“I was hoping a suitable job would come up I could fit around my son. Nothing did, but I was offered a role as a carer, which allows me £160 a month through Universal Credit.”

“I live on a strict budget, which we’ve had to get used to,” she says. “However, my worry is that I’m now going to lose some of my Universal Credit allowance.”

Tracey says she has nothing of value left as she has no car and her TV is rented.

Dan Paskins, director of the charity Save the Children, said, “The £20 increase has been a lifeline for many families.

“Parents we work with tell us that they’re relying on the extra £20 per week to buy essentials like food and clothes for their children.

“Without it, we know that many more families will be pushed into the red.”

Labour should be turning Tracey’s case, and those of millions just like her, into a battering ram against the Tories.

Instead timidity, and fear of the left, means the best they can offer is a “re-badged” system.