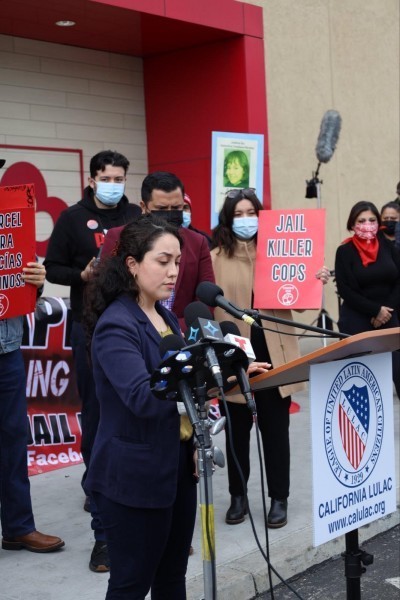 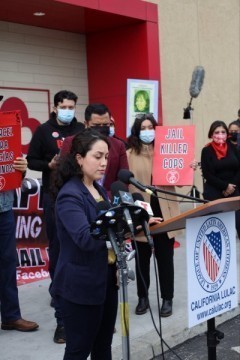 Los Angeles, CA – On December 23, 2021, the crowded North Hollywood Burlington store became the scene of two lives taken by LAPD. Daniel Elena Lopez was assaulting a woman, and 911 calls were placed by witnesses. One witness incorrectly reported that shots had been fired inside of the store. LAPD showed up to the scene. Police body cam video recently released shows the LAPD negligence and disregard for human lives.

Killer cop William Dorsey Jones, carrying a military grade assault rifle, saw Lopez 20 feet across an aisle, never ordered Lopez to do anything, and simply fired three shots at him. One missed, one killed Lopez, and the other easily pierced through a wall, killing 14-year-old Valentina Orellana-Peralta, who was on the other side of the wall. Peralta was hiding inside of a dressing room in fear, hugging her mother Soledad Peralta. Jones’ shot killed Valentine, who died in her mother’s arms. Peralta said at a press conference that her teen daughter started to convulse and went limp. In the LAPD body cam video, her mother’s screams are instantly heard after Jones fires.

Centro CSO, a Boyle Heights/East LA organization, joined forces outside of the Burlington store with the League of United Latin American Citizens (LULAC), Justice X, and others for a press conference on December 28. LULAC initiated the press conference to shine a light on how LAPD has killed six unarmed residents – mostly Chicano and Latino – in the last weeks of 2021.

During the press conference, Sol Marquez with Centro CSO read a statement of solidarity and support to Valentina Orellana-Peralta’s family and loved ones. The statement was written by the Anti-Police Brutality Committee of CSO. Marquez said, “LAPD used reckless tactics causing the deaths of two people – one a child. This is the second time the LAPD has killed a 14-year-old in recent years. On August 9, 2016, two-time killer cop Eden Medina shot and killed 14-year-old Jesse Romero.”

Attorney Christian Contreras with Justice X talked about how LAPD expects no consequences for their negligence, in particular when their officer-involved-shootings are committed against Latinos or African Americans.

Orellana-Peralta’s family arrived from Chile only recently looking for a better life. The parents have retained an attorney and are demanding an independent investigation by the California Attorney General Rob Banta.

Centro CSO plans to continue demanding justice for all victims whose lives were claimed by LAPD and the LA sheriffs who both patrol certain sections of Los Angeles County. Plans are to amp public education via a grassroots campaign to push for an LA County charter amendment in 2022. The amendment would bring more power to the LA County Civilian Oversight Commission and create a procedure to allow impeachment and removal of LA Sheriff Alex Villanueva. The next CSO Anti-Police Brutality Committee meeting is Thursday, January 6 at 7 p.m. on Zoom (online). Please message them at any of the following for the link: 323-401-0433, [email protected], or @CentroCSO on Facebook, Instagram, TikTok, Twitter.

France: A crowded presidential race – what should the Left do?

‘They Want Us Dead’: Another year of devastating overdoses in Baltimore

Check out the new issue of Struggle-La Lucha:Amazon kills…