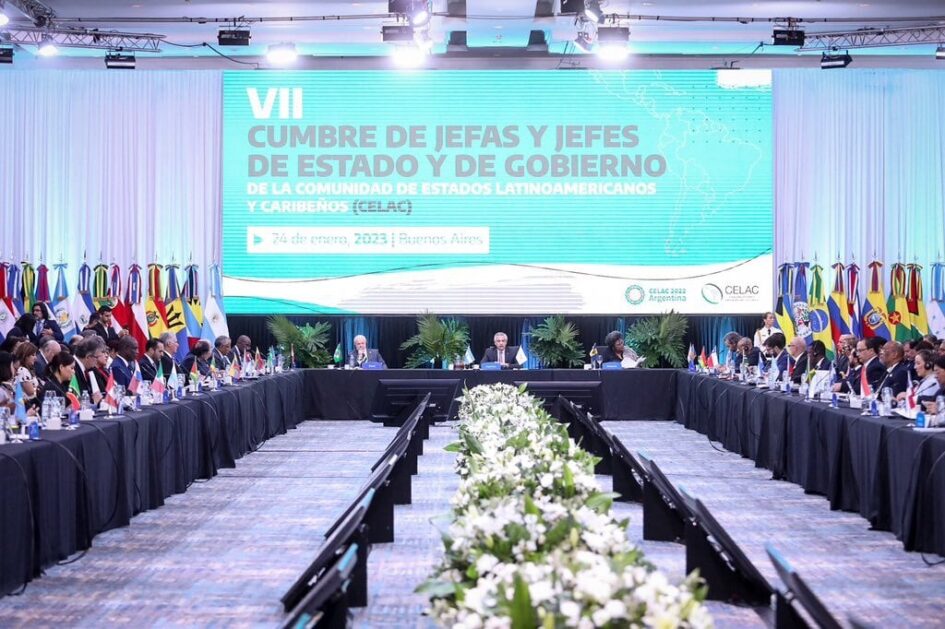 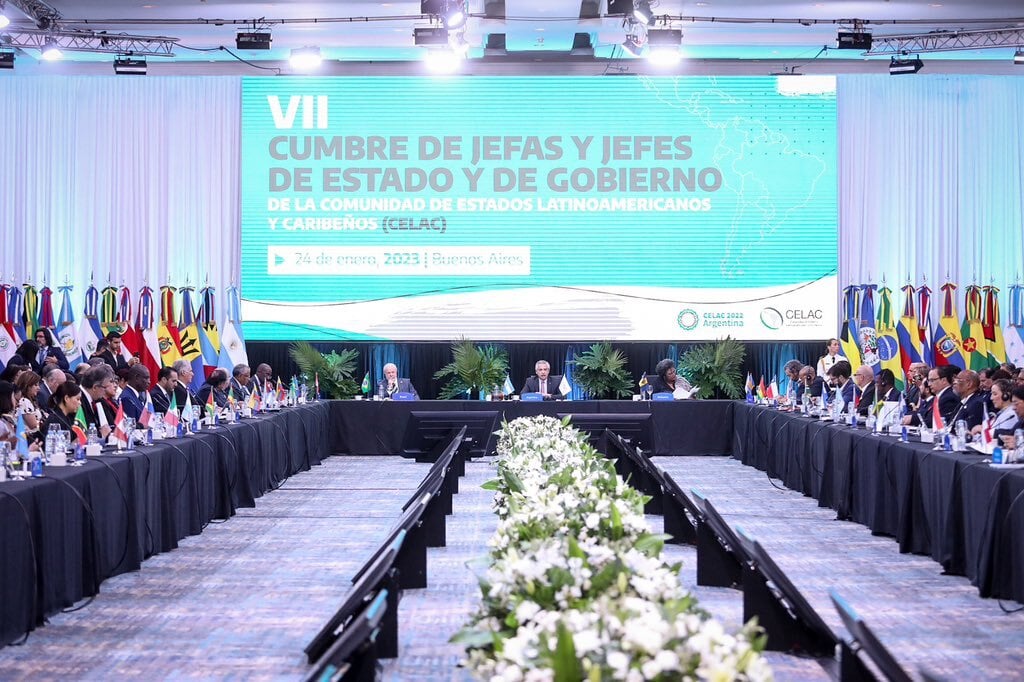 The 7th Summit of CELAC, the Community of Latin American and Caribbean States, is taking place today in Buenos Aires, Argentina. An exciting highlight of this year’s summit is Brazil’s reintegration. President Luiz Inácio Lula da Silva reversed Jairo Bolsonaro’s 2020 withdrawal from CELAC soon after his inauguration in early January.

There is renewed optimism to reanimate CELAC after a challenging period between 2015 and 2021, when several right-wing governments took power, particularly in Argentina (2015), Ecuador (2017), and Brazil (2018). In Bolivia, Evo Morales was overthrown in November 2019. Argentina’s Cristina Fernández was falsely prosecuted for corruption in 2015 after her presidency ended. And Colombia’s Iván Duque persisted in aggressive actions against Venezuela as the United States waged economic war and coup plots.

When Bolsonaro was elected in 2018, he withdrew Brazil from CELAC and expelled 8,300 Cuban doctors who were treating severely underserved communities. Lenín Moreno was elected Ecuadoran president in April 2017 and quickly reversed many progressive policies of previous leader Rafael Correa.

In the midst of such uncertainty and regressive developments, no summits were held between 2017 and 2021, until the sixth summit was held in Mexico. López Obrador was elected president in July 2018.

But all of Washington’s plots and arm-twisting cannot turn back the tide of progress, as the people have mobilized to defend their rights. Lula’s presidential election in Brazil after a trumped-up conviction and imprisonment is a huge victory for the Brazilian people and all the people of Latin America. Another major development was the election in Colombia of the country’s first leftist president, Gustavo Petro, who immediately declared his intent to reestablish friendly relations with Venezuela after years of unrelenting U.S.-directed hostilities and aggression.

Bolivia’s masses courageously defeated the fascist coup, first through massive protests and elections 11 months later. Hondurans elected Xiomara Castro in November 2021 after 12 years of U.S.-backed right-wing governments originating from the 2009 coup. And now in Peru, despite the murder of dozens of protesters, Dina Boluarte’s days as coup “president” may be numbered. The brutality of the police has fueled larger protests.

Determination and new proposals at the summit

On Monday, Lula and Argentine president Alberto Fernández held a press conference and announced plans to create a common currency for the region. Argentina has been serving as the rotating head of CELAC since 2022.

Venezuela’s president Nicolás Maduro immediately saluted the idea of a common currency. He said, “I announce that Venezuela is ready and we support the initiative to create a Latin American and Caribbean currency.

He also announced he will not attend the Summit because of a fascist mobilization demanding his arrest that was threatening to disrupt the event. Venezuela’s foreign minister Yván Gil will represent the country instead.

CELAC was first conceived in 2008 by Latin American leaders during the Summit of Latin America and the Caribbean on Integration and Development (CALC). After several planning meetings, CELAC was inaugurated in December 2011 in Venezuela, and the first formal Summit was convened in Chile in 2013.

The main ongoing goals of CELAC are economic, political and social integration to bring about sustainable development for the 660 million inhabitants of the 33 member states. Many themes will be covered in the summit, from the environment to economic challenges that arose with the COVID pandemic.

Among the points of discussion today will include the strengthening of CELAC as the sole representative of Latin America and the Caribbean in the global context; reaffirming the region’s opposition to the U.S. blockade of Cuba and the false charge that Cuba is a state sponsor of terrorism; and assuring that the issues affecting Caribbean countries are consolidated in the final documents.

CELAC was founded with the exclusion of the United States and Canada as an independent counterpoint to the Organization of American States. The OAS, whose headquarters are in Washington DC, works to further the interests of U.S. capital. This year, however, Argentina’s Fernández invited presidents Joe Biden and Xi Jinping. The Chinese president will address the summit by video. Chris Dodd, special advisor to Biden for the Americas, will attend for the U.S.

Fidel Castro described the OAS as “the Yankee Ministry of Colonies and a military bloc against the peoples of Latin America” in early 1962 for good reason. The United States has used every instrument in its arsenal to attack the sovereignty of every Latin American and Caribbean country. Whether it was the dark days of fascist coups in the 1960s and 1970s, electoral interference, or sanctions and “soft coups” of later years, Washington has long acted as if the south of the western hemisphere truly is its backyard.

As the convenors of the summit note, this is the 200th anniversary of the Monroe Doctrine, when the U.S. government decreed that no power other than itself could have influence in the hemisphere. The numerous Marine invasions from Dominican Republic to Panama seemed a permanent feature of Latin America and Caribbean relations with the United States. In 1962 Cuba was expelled from the OAS because of its socialist revolution.

Of late, the OAS’s general secretary Luis Almagro has played an especially aggressive pro-U.S. role. Almagro backed the fiction of U.S. puppet Juan Guaidó as Venezuela’s “president.” He is widely seen as having played a key role in the overthrow of Bolivian president Evo Morales. In short, he is a shill for Washington.

The fact that China and Russia, among other countries, have expanded economic and political relations with the region signals a clear rejection of the Monroe doctrine.

Despite Washington’s continued attempts to dominate Latin America and thwart its progress, the peoples of the region and leftist governments are determined to push forward. The peoples of Latin America and the Caribbean are forging new bonds of cooperation and solidarity, something that strengthens the position of progressive people the world order.

Meeting of the SI Committee for Latin America and the Caribbean, La Romana, Dominican Republic

Latin America and the Caribbean: Year 2022 in Review

Brazil: Against the coup-plotting right wing – for unity, mobilisation and class independence!

Against the Coup-Plotting Right Wing in Brazil: For Unity, Mobilization, and Class Independence!