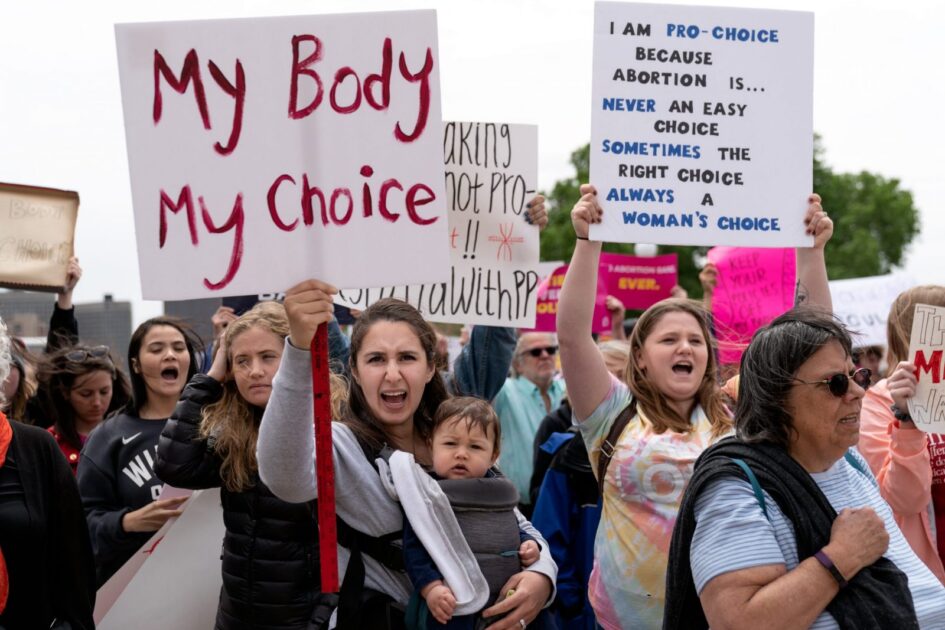 This is the text of a leaflet distributed by supporters of Socialist Revolution at women’s rights demonstrations throughout the country. Download the PDF of the four-page foldable leaflet here.

A new offensive has been launched against the right to abortion, as state legislatures across the US pass some of the most draconian anti-choice laws in US history. The Republican wing of the ruling class seeks to ban abortion outright, infringing upon the fundamental reproductive rights of all women.

Abortion was first made illegal in the US between the between 1820–70, in the context of the institutional patriarchy and sexism of American capitalist society. In the 1960s and 1970s, the Civil Rights movement, anti–Vietnam War movement, LGBTQ struggles, and general social ferment helped push forward the movement for abortion rights. This culminated in 1973 with the Supreme Court legalizing abortion nationally via its ruling on Roe v. Wade.

However, even the most basic democratic rights are always at risk as long as the capitalists are in control, and almost immediately, the extreme right launched a counterattack. Ever since, abortion has been a polarizing question used by politicians as election-year fodder. Before the 1970s, conservative politicians could reliably lean on the racism of their white Evangelical voter base by openly supporting segregation. After the Civil Rights movement weakened this position, these politicians needed a new way to rope in these voters, and they found an emotional lightning rod in the form of anti-abortion policies.

As for the Democrats, they have played a pernicious role in allowing the rolling back of abortion rights and access over the last few decades. After Roe v. Wade, hospital administrators argued that providing abortions in their facilities would swamp them with new patients. In response, liberal reproductive rights advocates connected to the Democrats argued in favor of a network of separate, private, stand-alone abortion clinics. This created stigmatized areas that could be easily targeted by anti-abortion picketers and right-wing terrorists, giving the private hospitals even more of an excuse not to provide these services.

The segregation of abortions and related procedures from general healthcare laid the basis for decades of state-imposed “TRAP laws” to restrict access. It also allowed for a perpetual back-and-forth over this question during election cycles. Being “for” or “against” abortion has been used to bully people into supporting either the Democrats or Republicans, neither of which defends the interests of the working class. For example, in 1973 Biden said he did not believe that “a woman has the sole right to say what should happen to her body.” And in 1977, he used his political weight to block federal funding of abortions specifically in cases of rape and incest.

This all begs the question: why are the life outcomes of millions determined by a small handful of unelected judges? Where has “lesser evilism” gotten us? In the face of the ramped up attacks, we cannot depend on the capitalist courts and politicians to protect our rights—as so many liberals would have us do. The fight to defend the right to free and accessible abortion is a working-class question, and it requires a working-class solution.

As Marxists, we support free universal healthcare including unconditional access to abortions for all who choose to have one. However, atomized private clinics and reliance on a handful of undemocratically appointed defenders of bourgeois law is no way to guarantee this. A mass socialist party could guarantee access to abortion in its program and campaign for a complete overhaul of the for-profit healthcare system.

The US section of the International Marxist Tendency fights for universal healthcare as one of the basic demands for achieving socialism. This includes all reproductive care—up to and including abortion—to be provided free of cost to the patient at the point of service without the slightest bit of shaming or stigma.

Only a socialized, universal healthcare system can end the debate over abortion once and for all. This would require the abolition of the health insurance industry and the nationalization of all hospitals, clinics, the pharmaceutical giants, and the medical machine industry. Fully funded and democratically administered by the working class majority of society, public health would improve dramatically.

But healthcare is just one aspect of this question. The need for abortion would dramatically decrease if the social conditions that engender poverty and hunger for millions were abolished. The reactionaries who oppose a woman’s right to decide what to do with her own body are fanatically concerned with the right to life before birth—but they could care less about the right of the majority to live decently once they are alive.

Declining standards of living in a world of instability has made the prospect of child bearing and rearing a nightmare for millions, and an unplanned pregnancy often means a life sentence of poverty and marginalization for both the parents and children. That is why we must link the demand for abortion rights with a broader working-class program for well-paid jobs for all; free, quality education and daycare facilities; affordable housing capped at no more than 10% of a person’s income; public laundry services and subsidized restaurants serving quality food; and much more.

Although we can win some reforms under capitalism, these will always be limited and in danger of being rolled back until we establish a government of, by, and for the working class. Ultimately, only the building of a new society under a workers’ government can lay the basis for a new stage of human development in which women can freely choose what to do with their bodies—free from all economic, political, religious, or social pressures or compulsion.