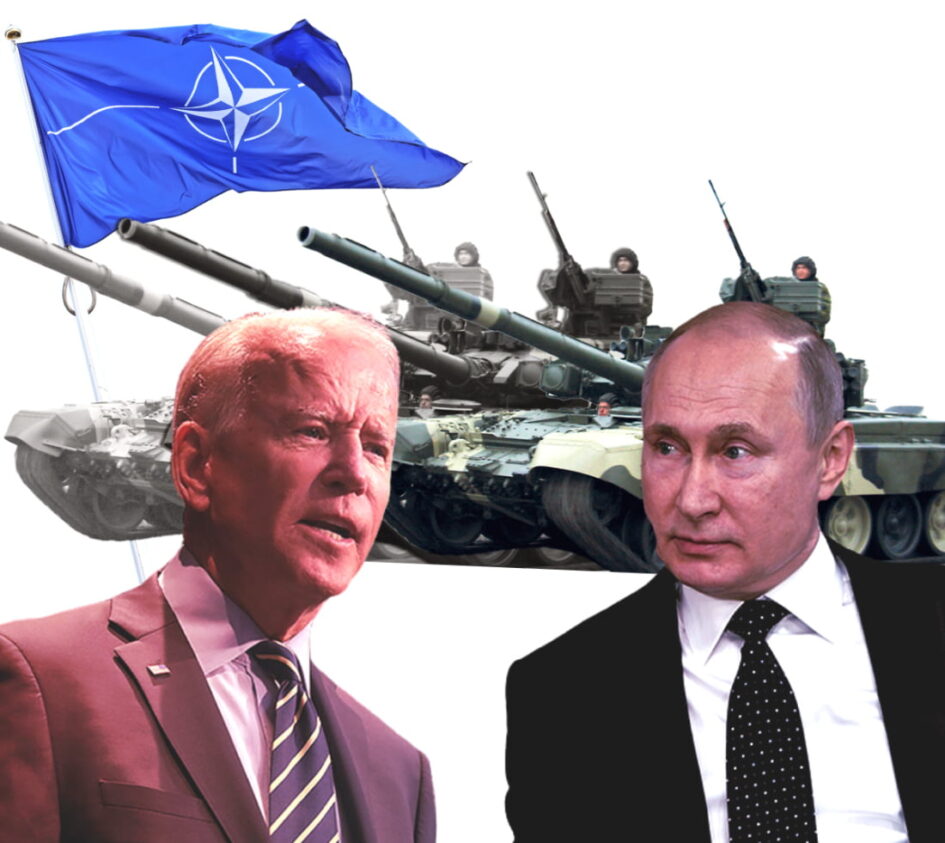 This is the text of a leaflet distributed by supporters of Socialist Revolution at antiwar demonstrations throughout the country. Download the PDF of the four-page foldable leaflet here.

Read our full article on Russia’s invasion of Ukraine here. 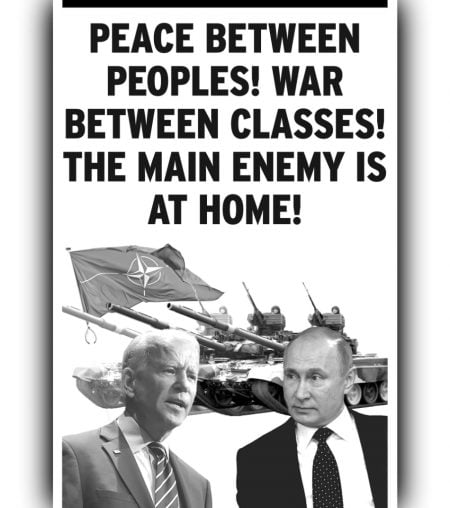 Vladimir Putin has ordered an all-out invasion of Ukraine by the Russian military. Horrific scenes of human misery and death have been splashed across our screens as the war is live-streamed across social media by tens of thousands of people in the war zone itself. The war in Ukraine is yet another example of the earthquakes that will continue to be unleashed by the buildup of tensions along the many fault lines of world capitalism and imperialism.

After the collapse of the Soviet Union, the US promised that NATO would not expand “one inch” toward the East. Since then, the imperialist military alliance has absorbed 14 countries from the former Eastern Bloc, growing from 16 to 30 members. Its military spending has increased from $481 billion to $1.2 trillion—totaling 63% of global military spending. Putin’s aim has always been to push back against the arrogance and physical encroachment of US imperialism and its NATO allies—by any means necessary. He wanted to punch the big bully on the block’s nose and assert his dominance over his own little fiefdom. He clearly also wanted to distract attention from the growing problems, opposition, and rising class struggle at home.

War is the most complex of all equations. It’s a massive gamble by the Russian president and his cronies. The long-term, medium-term, and even short-term outcomes and repercussions cannot be predicted with any precision, not only in that part of the world. This is not a major war, in the sense that it’s not World War III, a direct clash between the militaries of major imperialist powers. But it is a war aimed directly at the heart of NATO, with modern industrialized cities and their populations being savaged by the most modern weaponry on the planet. It represents a major recalibration of the postwar balance of power, and above all, of the balance of power that prevailed after the collapse of the Soviet Union.

It is a stark reminder of the sharp and sudden changes we will continue to see in this epoch of capitalist crisis, which coincides with the relative decline of US imperialism. In the past, US imperialism had hundreds of thousands of troops massed in Western Europe specifically to confront the Russian military. A few decades later, the US doesn’t dare send troops anywhere near the combat zone.

Because although the US undoubtedly remains the preeminent economic and military power on a world scale, it is no longer the most powerful in every region of the world. The harsh reality for the US imperialists is that their dreams of a Pax Americana and the so-called Project for a New American Century lie in shambles. This explains their newly discovered “humanitarianism”—never mind what they did to Iraq, Afghanistan, the former Yugoslavia, Vietnam, the Dominican Republic, the Philippines, Mexico, and dozens of other countries over the last couple of centuries.

But we must emphasize the relative nature of US imperialism’s decline. US military spending remains higher than every other major imperialist power combined. The ferocious beast of American imperialism may be old and weakened, but it still has sharp teeth and claws. But nature hates a vacuum, and something or someone will fill the space that weakened US imperialism is leaving in its wake. Just look at rising Chinese imperialism’s role in all of this.

History is a nonlinear process and full of contradictions. The profound shifts in economic and social relations we have analyzed since the collapse of the Soviet Union give rise not only to inspiring mass movements and revolutions, but to reaction, war, and counterrevolution. So although an all-out war between Russia and Ukraine did not appear to be the most likely outcome, it always was a possibility. Nothing should surprise us in a world balanced on the edge of chaos.

We are not obliged to take sides. Marxists only take one side—the side of the working class. We must always ask whether or not this or that event increases working-class consciousness, confidence, and unity. This war is clearly not in the interest of the workers of Ukraine or Russia, or anywhere else. Quite the contrary. Along with workers in uniform killing other workers in uniform, as well as civilians, and the destruction of valuable and needed infrastructure, the poison of nationalism is once again on full display, both great Russian and Ukrainian.

Although it is nowhere near the level of US imperialism, Russia is undoubtedly a regional imperialist power. And although Ukraine is not a major power in and of itself, it is being used as a pawn and a puppet by US and Western European imperialism. So although we stand in absolute solidarity with the ordinary people of Ukraine, we do so on a class basis. We give not an iota of support to the rotten capitalist regime that rules over the Ukrainian working class.

Despite the constant barrage from the liberal media, we cannot simplistically adopt slogans like “no war on Ukraine!” or “hands off Ukraine!” These are Biden and the liberals’ slogans, and we can’t appear to lend them any credence whatsoever. Wars are dynamic and contradictory events, and our positions can’t always be summed up in a short and snappy slogan. The class interests involved are always absolutely fundamental to our analysis.

It is not the task of world imperialism to topple Putin and Russian imperialism—that’s the duty of the Russian working class, of the Russian Marxists, and the world proletarian revolution. Likewise, it is not the task of Putin and the Russian imperialists to take out Zelensky. It’s the task of the Ukrainian working class, with its heroic revolutionary traditions, united with the workers of the region to deal with their ruling class and the Maidan regime. Had there been a socialist revolution in Russia, and this was a revived Red Army invading Ukraine in internationalist solidarity to help the Ukrainian workers overthrow their rulers, we’d have a very different position. But that’s not the case.

As for those of us living in the belly of the beast, it is our duty to expose the hypocrisy of our imperialism and its allies. We are against US imperialist intervention in any way, shape, or form. We don’t call for or support sanctions, which are capitalist sanctions, of, by, and in the interests of the capitalists.
It is impossible to know precisely what will happen. The war may end relatively quickly, perhaps in a total victory for Putin, and his position may be temporarily strengthened. Or it may end quickly in a stalemate. Or it could drag on for quite some time, and Putin could be dragged down with it. No matter what, Russia will be a greater pressure cooker than ever, a ticking time bomb of class struggle.

As revolutionary Marxists, we are not pacifists. We are not against war and the use of force in the abstract. As Marx famously said, “force is the midwife of every old society pregnant with a new one.” It all depends on who is using force and in whose interests. And that’s why our slogan is “no war but class war!”
In the final analysis, this is part of the price humanity has to pay for not having built the revolutionary subjective factor and overthrown capitalism over the last hundred years. It is a graphic example of what we mean when we say the choice before us is socialism in our lifetime or barbarism! It should steel us in our commitment and dedication to fight and win against this system, which is truly “horror without end” for the vast majority of humanity.

As Lenin always insisted: the main enemy is at home.

Down with imperialism!
No war but the class war!
Long live socialist internationalism and the world revolution!

The main enemy is at home: The urgent tasks for the anti-war movement

Imperialism, the Enemy of Peace

Stop the escalation of confrontation in Ukraine and Europe – Say no to war! Defend peace!

The Struggle for Development: The Labouring Classes in Turkey

“I think the main aspect of our solidarity is extremely simple: it is to fight”

Rather Than Sink Main Street by Raising Interest Rates, the Fed Could Save It: Here’s How