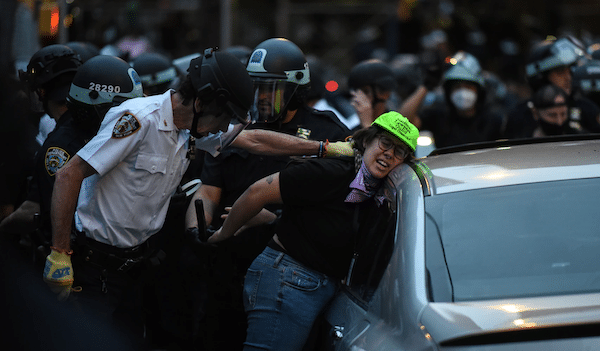 THE RASH OF civil rights lawsuits against the New York Police Department as a result of its behavior during last summer’s protests continues to grow, with a new suit filed September 2 by a group of people alleging police violated their constitutional rights during the now notorious Mott Haven kettle.

Unlike many of the other suits filed so far, the dozen plaintiffs in this case weren’t protesters. Rather, they were in the Bronx that day as legal observers, participants in a long-running National Lawyers Guild program that trains and equips volunteers to observe protests and document the conduct of the police who respond to them.

The lawsuit describes targeted harassment and violence by the NYPD against legal observers on June 4, 2020, by rank-and-file cops, their supervisors, and the NYPD’s own in-house lawyers. In the 15 months since, the police have conducted no investigation into the treatment of the legal observers, have not responded to letters from the observers’ lawyers, and have insisted that there was nothing inappropriate in their treatment.

The effect, says Gideon Oliver, one of the lawyers for the 12 legal observers bringing the suit, is an NYPD that has escalated its attacks on one of the vital organs of free speech in New York City. “Legal observers perform important functions when police make arrests at demonstrations, and this targeted roundup of legal NLG legal observers at the scene is something that the NYPD brass and city officials have sanctioned by refusing to do a real investigation of what happened, or impose any discipline,” Oliver said.

It’s been dead silence from the police department in response to these plaintiffs’ attempts to get some transparency and accountability.

The New York City chapter of the National Lawyers Guild has been training lawyers, law students, and legal workers to observe and document the way police respond to protests since 1968. Trained NLG observers are identified by a lanyard badge and a neon green baseball cap.

Official observers don’t enjoy any special constitutional status; everyone on the street, from passersby to journalists, enjoys the same legal right to observe and document public police actions. But the work legal observers do is important. Collecting the names of people arrested at protests is the first step toward ensuring that they have legal representation. During the mass arrests at the 2004 Republican National Convention, those names allowed lawyers to secure a habeas corpus writ for hundreds of protesters who were unlawfully detained by the NYPD, sometimes for days, without access to lawyers.