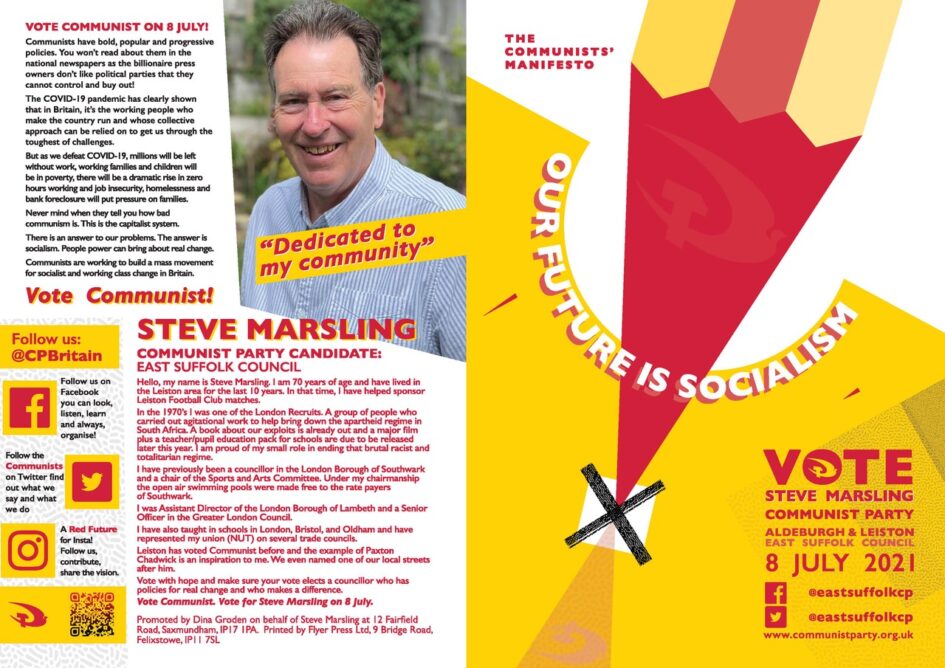 Steve Marsling, Communist Party candidate for the Leiston and Aldeburgh by election, polled 61 votes on a poor 27% turnout. The poll proved a shock for the Conservatives as the Greens topped the poll in this massive true blue area. Steve polled 20% of the Labour vote and 1.25% of the total vote.

At the three hustings that were held it was agreed by all parties that the Communist candidate was the most powerful and passionate speaker. So much so that the victorious Greens asked to work with Steve in future campaigns.

Said Steve, ”The main issues were the loss of NHS Dental Services in the area, and the proposals for the building of Sizewell C. This will destroy the Suffolk Heritage Coast, devastate the RSBP Site in Minsmere and wreck the tourist industry.” The building of a power hub by Scottish Power, the size of three Wembley pitches next to the charming village of Friston was also an election issue.

Steve continued,  “The closure of NHS Dental Services in Leiston by My Dentist, a conglomerate with over 200 dental practices around the country is a scandal. EDF and Scottish Power and My Dentist put the needs of their wealthy share- holders before the needs of the community.

In the hustings meetings, voters recognised that they did not have to fear the label “communist”. Many told us our proposals for an all-Britain, integrated, people-led and sustainable plan for energy and our proposal that dental and eye services be reintegrated into the NHS, whilst big pharmaceutical drug companies were brought into public ownership, were much needed and doable.”

Communist Party general secretary Robert Griffiths thanked all those who have been out leafleting and campaigning in the community. Said Robert, “Voters are looking for a party that listens and then lays out clearly what needs doing, and sticks to its word. Recent elections have shown a marked interest in socialist politics and we intend to challenge as often as resources allow. The more members we have, the more campaigning we can do!”

Steve is back with a campaign stall this Saturday in Leiston.”