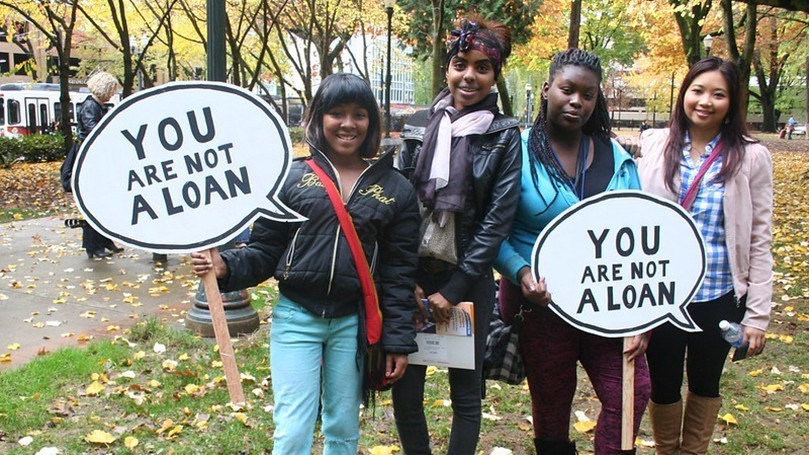 While on the campaign trail, Joseph Biden made a lot of promises. One of them was to forgive $10,000 dollars in student debt. His promises paid off big. When election time came around, Biden won roughly 60% of the youth vote.

So far, the president has only partially honored his promise. The Education Department recently announced the forgiveness of $415 million in federal student loan debt. This follows last summer’s $55 million in debt relief for students of three for-profit colleges. But the beneficiaries of these measures were limited to students who attended for-profit institutions that engaged in fraudulent activities and claimed they could place students in jobs. There are other modest fixes, too, like the debt relief for permanently disabled workers and public service workers announced last year. The amount of debt forgiveness is now at $2 billion for 107,000 borrowers. But this is a drop in the bucket of the $1.8 trillion in student debt.

Currently Biden’s approval rating is 38% to 45% depending on the pollster. Democrats may find an apathetic youth who may skip the polls if Biden doesn’t pick up his pen and cancel student debt. And a stroke of a pen is literally only what’s needed to cancel federally held debt, not legislation as Biden claims. That is, the Higher Education Act allows for a president to cancel federal debt by executive order. Biden’s fellow Democrats are feeling the heat from their constituents. Over 83% of Democrats support canceling at least a portion of student debt. Senate Majority leader Chuck Schumer, Senator Elizabeth Warren, and Representative Alexandria Ocasio-Cortez are pressuring the president to cancel $50,000 per student instead of the $10,000 figure Biden supports. And Bernie Sanders recently tweeted, “Cancel it. Every penny.”

Loan payments were suspended during the pandemic, but students will have to resume them in May, unless something is done. If Biden and the Democrats wish to recapture that 60% youth vote during the midterms, it’s time to get moving. 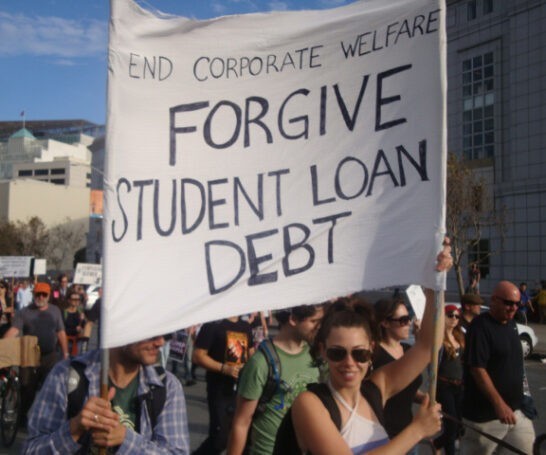 The right wing is attempting to paint student debt forgiveness proponents as so-called privileged East Coasters attending Ivy League universities, but  the reality is quite different. First, such sentiment assumes that education is only for the rich and that the working class does not belong and should not belong in academia, but should be restricted to manual labor. Second, it ignores the demographics of who suffers from student debt. This is a working-class, racial, and social justice issue. Quoting from the Hill: “This means that these recent graduates, most of whom are working class by anyone’s definition, make average monthly payments of $300 on their student loans while struggling, in a down labor market, to make rent, pay for food, medical care and transportation. This has only been exacerbated in the COVID-19 era, during which one in three households are struggling to pay their monthly bills.”

Women, and especially women of color, suffer from the burden of student debt. A study from the American Association of University Women found that

Nothing I am writing here is news or particularly groundbreaking. Many comrades have written about this before and in far greater detail. What I am here to say is that the young people need to take a stand and begin to focus and strategize on the issue of student debt. It is not through the grumblings of the masses that the ruling class will make concessions; it’s through the collective action of the masses where demands are won and history is made. An apathetic youth is a sign not of radicalization but of defeat and surrender. Apathy is not a sign of rejection of the system but acceptance of its supremacy. If young people remain unengaged in struggle and divorced from politics, the victory of fascism is inevitable.  We need to organize among students and graduates alike, with the issue of student debt clearly being one that excites. 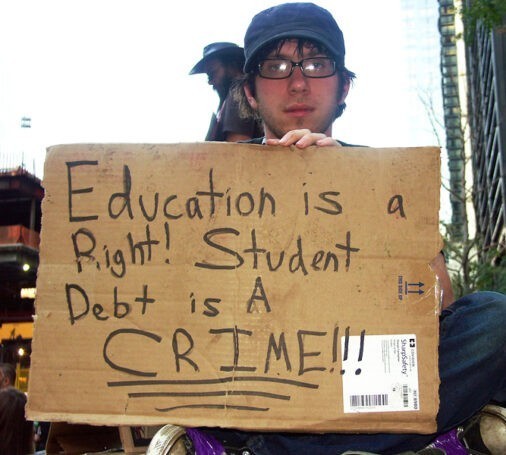 The Young Communist League and the Party alone cannot hope to win this fight. The entire youth and student movement must join together and move forward, but what is essential is the leadership of revolutionary youth armed with what we call the “Communist Plus.”

Take the stats I listed above from the AAUW. To some, the stark difference in student debt in  regard to gender and race may seem as isolated issues or even coincidences. The Communists say no! Student debt is only one of the many issues facing women and in particular Black women and women of color, and the forgiveness of student debt will not magically fix the systemic issues inherent in white supremacy, patriarchy, and capitalism. Only communist leadership can bring the “plus” and turn an economic movement into a revolutionary movement for revolutionary change.

Those who have not yet done so should attend meetings with Debt Collective and work with other youth, student, and graduate organizations. What’s more is that come the midterms, Democrats will most likely be in trouble, and this is something Chuck Schumer is very aware of, hence his attempt to persuade the Biden-Harris administration to move on this issue. As I said before, youth voter apathy is not going to effect change. Any candidate hoping to win in the midterms must address the issue of student debt forgiveness while on the campaign trail. And it’s up to the youth to pay attention to who’s running in their districts, confront the candidates at their campaign stops, and ask tough questions.

Young people always have been and will always be the engine for revolutionary change in society. It will take the whole youth of our country to fight for our present and organize to create a revolutionary future.

Rosa Luxemburg and Debt as an Imperialist Instrument