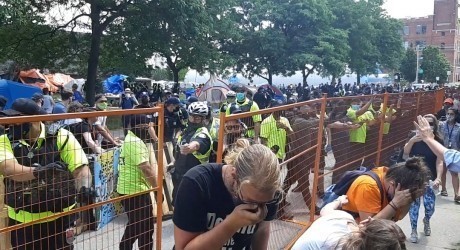 I was a witness outside the gate at Lamport stadium today. I arrived at about 12pm, and the violence I witnessed shortly after was truly horrific. A woman in front of me was pepper sprayed for standing. The police hit people with riot gear, leaving many with cuts and one man appeared to be concussed. Injured people being treated by medics were taken to a side street, and people standing blocking the gate were violently shoved to the ground and arrested again for simply standing there. So many people were shoved and thrown to the ground by police. There was so much force happening at once, so much screaming, pepper spray in the air, people crying…

I feel so much anger towards the city of Toronto for their violent response to poverty. Hundreds of thousands of dollars were spent terrorizing people to evict 14-17 people from encampments who will have no where to go. So many community members came out to support and put their bodies on the line, which gives me hope. But the violence displayed today confirms that the police must be defunded and that John Tory is not fit to handle Toronto’s houselessness crisis.