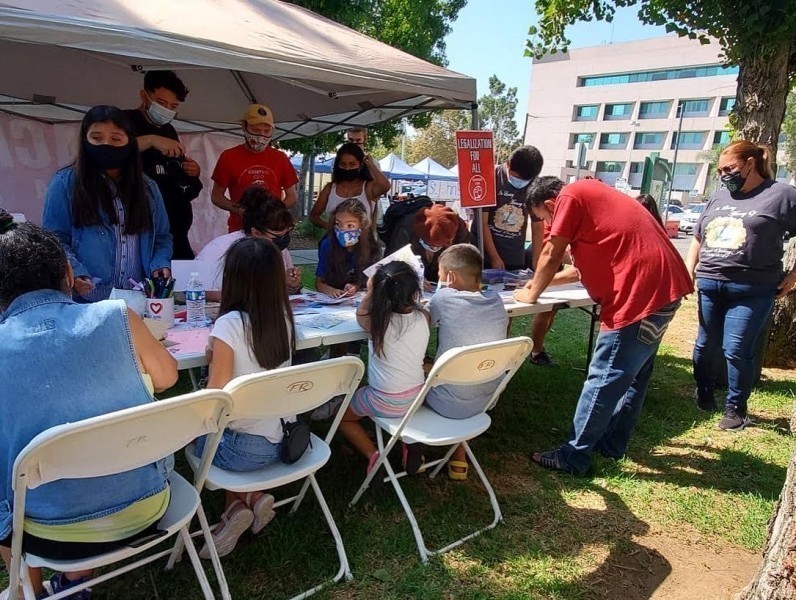 Children, their parents, and grandparents writing and coloring letters for refugee children.
(Photo by Nayeli Hernandez)

Los Angeles, CA – A group of people gathered at Belvedere Park in East Los Angeles, September 25, to write and draw letters. The artwork and letters are for the refugee children, mostly Central American, held at the Pomona Fairplex detention center. The event was hosted by the Immigration Committee of Centro Community Service Organization, or Centro CSO.

The event inspired many children, their parents, and even grandparents to sit under shade and draw. One grandmother told her granddaughter, “The drawing you are coloring is going to put a smile on another child like you, who is looking for their family.”

In February, President Biden created the Family Reunification Task Force, whose job is to reunite families. The Pomona center was a project launched by President Biden and Vice President Kamala Harris. Over 1700 children are being held there, but the facility has the capacity to hold up to 2500. More than 2461 children have already been reunified with their families or sponsor groups, and more than 290 have been transferred to other detention centers.

When the Pomona center first opened, it was met with large protests demanding that the facility be shut down.

Chicano politicians like Xavier Becerra and Hilda Solis have not only supported the reunification of the refugee children, they’ve also donated resources, money, and hosted fun activities for them. Children should not be locked in cages, nor detention centers. No matter how fun anyone may make it seem.

CSO members spoke against the recent Del Rio, Texas mistreatment and terror inflicted by border agents on the thousands of Haitian migrants. The U.S. diplomat to Haiti, Daniel Foote, resigned over the inhumane deportations. When resigning, Foote said, “Our policy approach to Haiti remains deeply flawed.”

The Biden administration is using the pretext of Title 42 to continue turning away refugees at the border and is continuing with deportations. Parliamentarian Elizabeth MacDonough, a nonpartisan arbiter of the Senate’s rules, advised the Senate against including immigration in the budget bill. This essentially halts any potential immigration bill.

Despite the attacks, Centro CSO plans to continue fighting for legalization. The letter writing and drawing event is one of many to come. If you wish to join the Immigration Committee of CSO, send us a message at [email protected], text us at our hotline 323-943-2030, or contact us at our various social media platforms. @CentroCSO on Facebook, Twitter, TikTok, Instagram. The next public, meeting will be online via Zoom, October 21, 6:30 pm.

Won’t somebody keep thinking of the children?