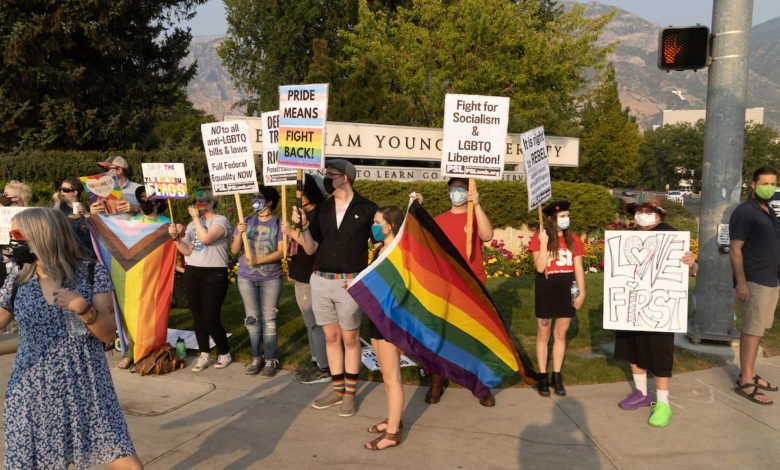 Last month, Utah saw a spike in anti-LGBTQ bigotry and violence. On August 18, a newly married lesbian couple in southern Utah was found murdered after telling loved ones about a “creepy” man following them; the case is being investigated as a hate crime.  Five days later, three anti-LGBTQ actions grabbed headlines.

First, a prominent Mormon church leader, Elder Jeffrey Holland, gave a speech to faculty and staff at Brigham Young University advocating more “musket fire” in response to criticisms from LGBTQ activists. Second, the Utah State School Board announced that it is against policy to ask students their gender identity and preferred name. Finally, an outspoken far-right member of the state school board, Natalie Cline, used social media to identify and criticize a local high school class for displaying a message welcoming LGBTQ students.  But since LGBTQ political organization and activism has been on the rise in recent years, the LGBTQ community and their allies responded with denunciations of Holland’s bigoted talk and advocacy of an inclusive approach to secondary education.

The Mormon-owned Brigham Young University has been a central arena of the struggle over LGBTQ liberation in Utah –– a struggle that has intensified in recent years. In the 1960s and 1970s, BYU’s president used spies to discover gay men on campus who were then subjected to electroshock therapy in order to stay in school. The approach now is more subtle, but no less oppressive since LGBTQ Mormons are unable to enjoy full fellowship and are excluded.

In the recent decade, the once underground LGBTQ community at BYU has emerged and begun advocating for a change in policy and culture. In reaction to this period of coming out, BYU’s administration has had to soft-pedal the second class status of LGBTQ students based on the fact that all students must wait until marriage to have sex but only heterosexual students can be married.  Unsurprisingly, the latter’s second-class status contributes to a culture of harassment on and off campus.

On the same day that BYU opened its new “Office of Belonging,” Holland of the Mormon church’s First Presidency gave a talk in which he lamented that the faculty and staff at BYU have not raised their “muskets” at the members of the public that have criticized BYU’s anti-LGBTQ policies concerning. Interpreted charitably, Holland’s comment was only violent metaphor, but is hard to think that this linguistic violence will not translate into physical violence– especially coming only days after the lesbian couple was murdered.

Though not directly advocating for violence against LGBTQ people, it is obvious that, at best, the Mormon church leadership is reckless with their violent rhetoric and exclusionary policies. LGBTQ oppression is a problem all over the United States, and Utah is no exception.In fact, 65% of LGBTQ youth surveyed in Utah reported being verbally harassed at school, compared to 51% nationally; more homeless youth in Utah identify as LGBTQ compared to the national average.  And there’s evidence that anti-LGBTQ bigotry is related to Utah’s high suicide rates.

In response to this spike in anti-LGBTQ bigotry, the Party for Socialism and Liberation and Provo Pride banded together to fight back, hosting a protest at BYU on August 27. The fight against LGBTQ oppression in Utah is a crucial fight, and this was reflected in the passion of the protesters. Upwards of 50 protesters held signs that advocated for LGBTQ liberation and rejected Holland’s violent rhetoric. Strangers who had never met each other were united in their opposition to the oppression of LGBTQ students and individuals throughout the state. With very few exceptions, drivers passing the intersection honked and yelled messages of support. Given that Provo is one of the most politically conservative cities in the country, there was a feeling that the tide is turning on this issue in Utah.

Protesters held signs with slogans that connected the LGBTQ struggle with workers’ struggles. Three speakers addressed the crowd. Tay Adams –– the director of Provo Pride and a former BYU student –– discussed the suffering he experienced trying to live as a closeted gay man while on a Mormon mission and as a student at BYU. Kaylee, an organizer with PSL Provo, drew the connections between LGBTQ liberation, the patriarchal family, and capitalism. Kelli Potter, an organizer with PSL Provo and an associate professor of philosophy at Utah Valley University, spoke of her experience at BYU and in the Mormon church as a closeted trans woman, an experience that played a role in her own political development toward revolutionary socialism. All three speeches showed the interconnection between LGBTQ+ and workers’ liberation and were very well-received by the energized group.

On the evening of August 28 in Salt Lake City, LGBTQ activists held a vigil asking those that would aim “muskets” at LGBTQ folks instead “bury their weapons,” a reference to a story in the Book of Mormon in which a once violent people bury their weapons and take an oath not to return to violence. One of the speakers at this vigil was Matt East, who came out as gay during his BYU commencement speech in 2019.

In recent years, the Mormon church’s bigoted policies toward LGBTQ members have come under increasing public criticism and have no doubt played a role in the high number of members leaving the church. So, it is no surprise that the demand for LGBTQ equality and liberation is intensifying in Utah.  Utah’s LGBTQ community and their allies are gathering strength while the bigoted reactionaries in charge are desparately trying to stem the tide of resistance to the capitalist patriarchy.