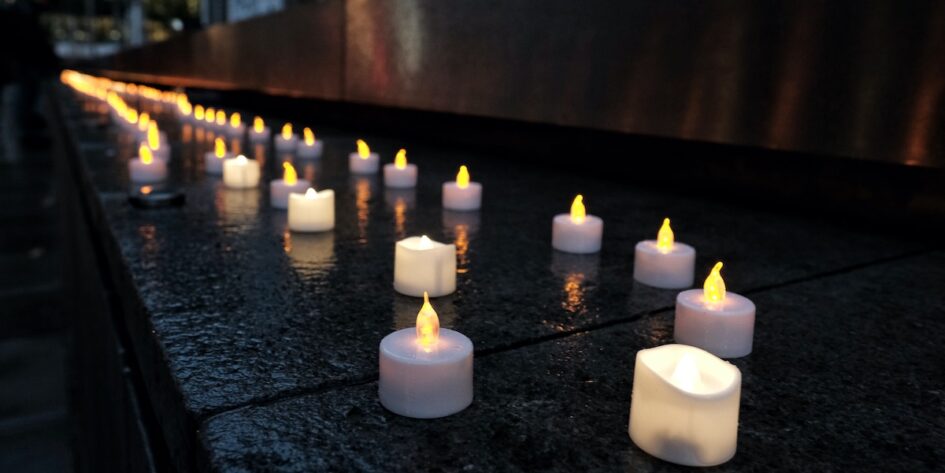 November 26, 2021 – From Red Pepper
103 views
Candles outside the Home Office during a #SolidarityKnowsNoBorders vigil. Photo by Angela Christofilou

At least 27 people drowned on the cold night of 24 November, as they made their final journey to what was supposed to be their safe place; the end of a nightmare and the beginning of their new life. We may never know their names, their families may expect a call or a message that will never come. The news headlines and social media posts will be calling them ‘migrants’ or ‘people’ at best. Three of them were children. We still don’t know how old.

As I watched the news unfold – politicians slinging blame at the other side of the Channel, our ‘saddened’ Prime Minister calling the COBRA meeting – I could not help but remember how, just a few weeks ago, many places around the UK welcomed Little Amal.

People organised a carnival of welcome for the giant puppet of a refugee child and her incredible crew as they completed one of the most challenging artistic endeavours of our time: an 8,000-kilometre walk, across many borders from Syria all the way to Manchester and on to Glasgow, during a pandemic.

The Walk and its associated local activities generated media interest and engaged people, especially children, in a story that is not always easy to tell. Amal’s walk has achieved her creators’ primary aim: to raise awareness about the experiences of people just like those who did not make it last night.

I was deeply moved to see so many people at Amal’s welcome events. For a brief moment, one giant puppet was able to cut through the vile rhetoric of right-wing governments and the tabloid media, to humanise refugees – people like me, and millions of others, who have sought safety in Britain.

At the same time, as a migrant justice organiser, I was left saddened and confused by the questions that no one asked. The gaps in our empathy and collective imagination for a fairer world. The same gaps we will see now in the debate around the latest tragedy in the Channel: Why is Amal walking?

Why did Amal have to walk 8,000km on her own? Why couldn’t Amal – or the thousands of refugees who undertake the same perilous journey – just catch a plane, or a bus, to a place of safety and protection? Why did Amal, and the people last night, and thousands of others have to try crossing the Channel by small boat, kayak or dinghy?

If we’ve learned anything from history, it’s that we must not shy away from asking these questions.

The truth is that Amal, like those who died this week, cannot fly to safety. That is the reality, because the lawmakers we have elected do not care if they live or die – as British failures and refusals to help thousands in need of protection attests. That is the reality, because those lawmakers have deliberately designed a cruel and hostile border regime.

There were other questions left unasked by the crowds and onlookers to Amal’s arrival on UK shores. Her story is not over. Far from it. In fact, in many ways, Amal’s arrival here marks the just beginning of her struggle.

The current system makes it impossible for people and children like Amal to come to or stay in the UK. She appears “too big” for a child. As an unaccompanied minor, Amal would be subjected to an age assessmentby social services, and if she is suspected of being older than she is, she might be x-rayed and detained until her age is determined by ‘experts’. If she is recognised as a child, she will be put into the foster care system, where she’ll remain stuck for many years.

While she waits for her application to be processed, Amal can go to school, but as soon as she turns 18,  her application for protection is likely to be refused. The ruling will say: before arriving here, she travelled through several countries deemed to be ‘safe’, and according to our government, refugees must seek protection in the first ‘safe’ country they land, regardless of the languages they speak; of having family and friends here.

Amal, like many thousands of refugees, will struggle to find legal advice. She will have no access to any public funds or services, including the NHS. If she gets ill, she will be forced to pay for her healthcare. Or she may not get any healthcare at all, since she won’t have any money – since she arrived, she’s never been allowed to work or to claim benefits. Amal will likely be made homeless. This is not a failure of the system – it is the system. The clue is the name: this is the Hostile Environment, official policy of the UK government since 2012.

This reality is difficult to take in. I have seen the shock on friends faces as they realise that I am not making up, or exaggerating, this incredibly violent and immoral system. It is one designed to punish, criminalise and dehumanise refugees and migrants.

We should be shocked, angry, sad, and upset. We must never normalise or get used to this deeply inhumane treatment of people, done in our name and to supposedly ‘protect us’.

The reality of our democratic system and perceived lack of power and resources can make us feel helpless. But there is a lot we can and must do to bring about real change – including things that will immediately make a difference:

Keep asking questions. Don’t trust the news or the politicians. Don’t trust me for that matter! Educate yourself, get out of your bubble, fact-check claims, and find out what’s going on in the UK.

Organise and connect. Join the growing #SolidarityKnowsNoBorders community of people organising for dignity and justice for all migrants and refugees. Reach out to us online, and spread the word.

Solidarity, not charity. Do not stop at charitable actions. Donations and financial support are great, necessary and appreciated, but Amal and thousands of others need your solidarity. We will need it until we get justice. We need allies to listen, really listen, and to help share our stories. We need allies to demand accountability and real systemic change.

Take action. Write to your MP, your local council, your school, university and NHS trust and demand immediate end of the Hostile Environment Immigration Policy, which should be replaced by the policy based on principles of dignity, justice and welcome. Check out the Fair Immigration Charter for a list of demands and suggestions on what needs to change. Say NO to the Nationality & Borders Bill.

Do not forget the people who have died because of the UK border regime.