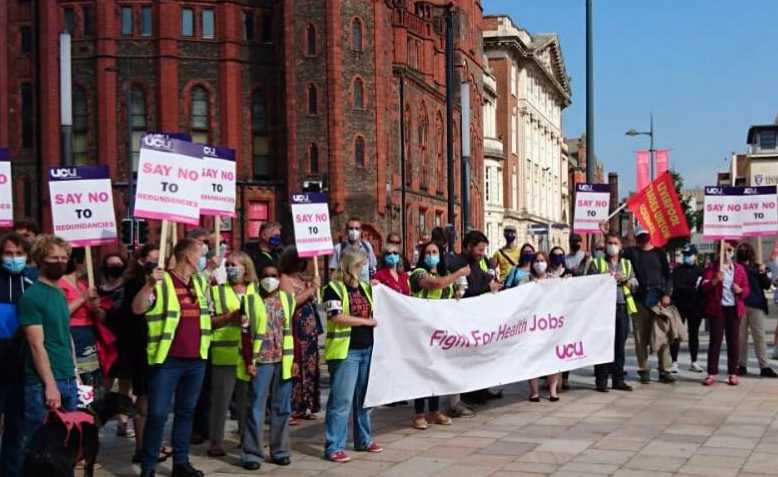 The long-running battle to save Health and Life Sciences jobs at the University of Liverpool has resulted in a resounding victory for UCU members after they managed to secure a deal with no compulsory redundancies.

Planned strike action at the beginning of October has now been called off, and the dispute that has lasted for six months, and originally meant staff facing the prospect of 47 redundancies, comes to an end.

“This is the longest strike in the history of our union and one of the longest in Merseyside in decades. It is worth remembering that a sustained campaign and a record ballot saved fifteen jobs before a moment of industrial action had taken place. Since then a further eleven jobs have been secured.”

This is a massive victory in the HE sector, where workers are facing a bosses’ onslaught in the wake of Covid. Other university workers must and can learn from this and win in the coming months.

Over 400 Unite workers at Essar’s Stanlow refinery in Ellesmere Port secured a massive 98% yes vote for industrial action over pay and pensions.

Workers are demanding that bosses honour the 2019 pay agreement, end the proposed closure of the final-salary pension scheme, and correct their failure to pay the workers a bonus for 2019/20 and 2020/21.

“Our members cannot and will not accept any attacks on their terms and conditions after working tirelessly through a global pandemic. Unite has created space and opportunity for Essar to return to the negotiating table.

“Make no mistake, if Essar abuses this gesture or fails to make an acceptable offer, strike action will be called.”

Essar Oil, which is reportedly on the ‘brink of collapse’, as they are due to pay hundreds of millions of pounds in unpaid tax to HMRC, has agreed to enter talks with Unite and has agreed to delay closure of the pension scheme.

PCS workers at the Driver and Vehicle Standards Agency (DVSA) have voted 92% for strike action and 95% for action short of strike on an 80% turnout.

Driving examiners are fighting over management increasing the number of tests they do a day from seven to eight. PCS is, at the time of writing, holding members’ meetings about driving examiners and their line managers potentially taking strike action. PCS says they are open to talks if management drop plans to impose eight tests a day.

“We will do everything we can to get the message across that this situation is not on the shoulders of DVLA staff, it is on the shoulders of the CEO and Tory ministers. The same ministers who were more than happy to see its staff strike, rather than reach a deal with us to end a dispute.”

This comes at a time when the government are blaming DVLA and DVSA workers and strikers for the HGV driver shortage, while the shortage is actually due to a range of factors, including severely poor pay and working conditions.

Cleaners at Great Ormond Street Hospital have begun balloting for strike action to demand parity with other NHS workers at the hospital.

In December 2020, the mostly black, brown and migrant cleaning staff represented by United Voices of the World Union, successfully put an end to the discriminatory outsourcing contracts they were on, after they voted unanimously for industrial action. However, since coming in-house, they have found that Great Ormond Street Hospital has maintained a two-tier system, denying them the same rights and conditions as other staff.

One of the cleaners said: “They don’t want to give us the same equality as GOSH, so therefore we are going to strike.”

You can donate to the strike fund and send a letter to the Great Ormond Street Hospital Trustees to show your support here.

Independent Workers’ Union of Great Britain (IWGB) members took to the streets of West London this week (30 September) to hammer home their demands for elementary rights from Waitrose-on-wheels firm, Ocado.

The #ShameOnOcado campaign already has the support of Black Lives Matter UK, Ealing Council and a number of Labour MPs, including Apsana Begum and Barry Gardiner.

“Our hard work has helped make Ocado Zoom a successful business, building it up from nothing to thousands of orders a day. We worked all through lockdown even though I fall in a high-risk category.

“I have colleagues who got ill and lost their loved ones. The public has applauded us for our efforts, but Ocado has taken every opportunity to slash our pay and force many of us out of work. They ignore our emails and refuse to engage with us. That’s why we’re demonstrating to make Ocado listen to our demands for decent pay and fair conditions, for ourselves and our families.”

This is what ‘us and them’ looks like in the twenty-first century. Only workers’ organisation can smash it.

Driving up pay on the buses

Bus drivers across the country are showing the will to strike and improve their pay and conditions.

In the north-west, Unite’s Arriva drivers across Merseyside and Greater Manchester are balloting for a pay rise. The ballot closes on 18 October and Unite is saying it intends to consult its members at rival firm Stagecoach too.

In South Wales, Unite’s ballot returned a 98% vote to strike on a 77% turnout, and in Devon and Plymouth, the RMT has turned down a 2.2% pay rise and will strike on 18 October.

As with HGV drivers, bus drivers are in short supply due to low pay and poor working conditions. The prospect of different companies striking in the same region simultaneously will make it much harder for the bosses to undermine action, as they did with scab services in the recent Go North West dispute.

Now would be a great time for the Go North West drivers to go on the offensive and regain the conditions lost earlier this year.

Standing up and being counted

Posties at the Royal Mail Delivery Office in Llanelli have kicked back against the wrongful dismissal of a colleague with a 98.6% vote for strike action on an 87% turnout.

Only one person in the depot voted against striking. At a well-attended gate meeting on Thursday morning, the Communication Workers Union membership were informed that notice for industrial action had been served on Royal Mail.

The first day of official industrial action in support of their dismissed colleague, Gary Evans, will be from 04:00 on 13 October to 03:59 on 14 October.

UCU and other union members at ten Further Education colleges in England began rolling strike action this week. Ten colleges were out on Tuesday 28 September and five of those also took a second day of action on Wednesday 29th. The branches involved have committed to up to ten days of walk-outs if necessary over the rest of this term.

The industrial action is primarily a protest against the collapse of pay parity that has affected the sector since the Tories came to power over a decade ago but also takes in opposition to creeping managerialism and escalating workloads. Three other colleges were scheduled to participate in the action but the threat of disruption was enough to prompt last-minute deals from management.

FE lecturers have suffered a devastating 30% pay cut in real terms since the Tories came to power in 2010. Last December, the governing Association of Colleges (AOC) offered a derisory 1% pay rise, which would be pathetically inadequate at the best of times but even more so now as inflationary pressures in the economy start to bite.

Further education has become a laboratory for Tory obsessions with marketisation and casualisation since the sector was semi-privatised in the 1990s. The strikes this autumn contain the seeds of a fightback for an alternative vision of post-16 education based on collective, rather than corporate, values.

UCU members at Falmouth University have voted overwhelmingly in support of action to protect the pensions of new staff. Eighty per cent of members who voted backed industrial action, after moves to employ new staff under a private company which would remove access to the Teachers’ Pension Scheme.

Management have been refusing to engage with the union on the issue, and as of 1 September, new staff, who also face precarious contracts and unaffordable house prices in the region, have had their pensions entitlement slashed by half.

The firefighter’s union, the FBU, have won a ground-breaking discrimination case against their bosses through the Employment Tribunal. It was proven that the Scottish Fire and Rescue Service had used national Covid guidance as a means of coercing workers with disabilities into using their TOIL and annual leave to facilitate shielding commitments. The bosses had used a similar ruse with female staff and their care responsibilities.

A victory, no doubt, but FBU’s Denise Christie struck a note of caution:

“In principle we are delighted with this result. It is another example of a trade union fighting and winning for its members.

“However, we cannot ignore the fact that, despite this judgement, the tribunal has seen fit to impose no sanction at all on the Scottish Fire and Rescue Service. Nor has the Tribunal seen fit to order the Fire and Rescue Service to reinstate the annual leave wrongly removed from our members. This is clearly unjust and we will challenge it with every legal tool at our disposal.”

This fight isn’t over.

The App Drivers and Couriers Union (ADCU) secured another legal victory after the union won worker-status recognition in a tribunal for drivers at Bounds Taxis in Northampton.

The judge ruled that drivers are entitled to the minimum wage, holiday pay and protection from discrimination. Bounds operated in such a way that the court ruled the drivers are workers: practices included requiring drivers to wear a uniform, and disciplining those who did not take jobs.

Shaqat Shah, Chair of ADCU Northampton and claimant in the case, said:

“I am so pleased and relieved that Bounds drivers are now finally recognised as the workers we always were. The era of brutal exploitation in the local minicab trade must come to an end, but Northampton City Council, who both license Bounds and use its services, must no longer turn a blind eye to the abuse that has gone on for too long.”