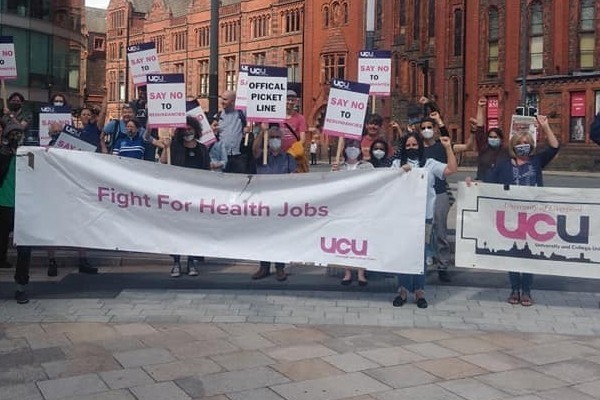 Striking UCU union members at the University of Liverpool brought their second round of action to a close on Saturday. But they are fighting on against redundancies.

The fight for jobs at the university has already had a big impact. An initial list of 47 compulsory redundancies has been reduced to two.

Rightly the UCU branch is determined to carry on fighting for the two remaining jobs on the “at risk” list.

Action continues in the form of “working-to-contract”. Discussion is now taking place on further strikes timed to hit the start of the new academic year in September.

Throughout the fight the momentum has been maintained with regular morning meetings of around 200 union members. Friday saw the sixtieth of these meetings.

At the beginning of the dispute a WhatsApp group was set up that quickly rose to over 200 participants.

A constant discussion goes on between members about the issues within the action, the behaviour of managers, how to deal with various challenges, how to bring in more solidarity, and the whole range of daily ups and downs that go on within the dispute.

Mass online events and demos have been the public face of the campaign, with speakers from other UCU branches in struggle, national UCU officials and representatives of other trade unions.

On Monday Jeremy Corbyn spoke to a rally of 500 at the University Square. Networks such as the UCU Solidarity Movement, Merseyside People Before Profit and Liverpool Trades Council have been crucially important for the fantastic turnouts at these events.

All of this activity has kept members involved, and helped the branch to hold the line in the face of management intimidation, and threats of 100 percent pay deductions for refusing to mark students’ work.

The official industrial action in defence of the jobs at Liverpool began on 10 May. A total win with the saving of every job is now within reach.

Leicester workers say they are ready to strike

UCU members at the University of Leicester have voted for strikes at the start of the new academic year.

The decision came at a UCU general meeting on Monday, two days before 22 academics lost their jobs as part of a restructuring programme. A second phase of restructuring threatens several more jobs in professional services.

Already the university has been subject to a “global academic boycott” and the summer saw members participate in a marking and assessment boycott.

However, with academics faced with the threat of swingeing pay deductions, it was clear that this was insufficient to defeat the attacks.

At the general meeting the example was given of Liverpool, where UCU members are driving back redundancy plans through sustained strikes.

UCU members at Leicester accepted a deal to end the marking and assessment boycott in return for promises that they would receive their full pay.

However, they also voted for “sustained strike action” from 27 September, demanding the reinstatement of those made redundant and the ruling out of compulsory redundancies in the second phase of restructuring. The UCU will now hold a consultative ballot to secure support for the strike action.