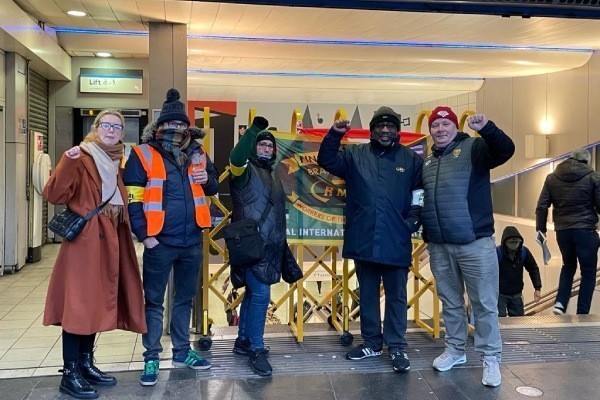 Workers on the London Underground struck on Friday against forced night and weekend working on the Night Tube.

The RMT union members’ action on five Tube lines had a huge impact across the capital on one of the busiest shopping days of the year, Black Friday. And many Aslef drivers’ union members—who aren’t officially on strike—refused to cross picket lines causing severe delays on other parts of the network.

The dispute boils down to who will drive the Night Tube trains. The 24-hour weekend services, suspended during the pandemic, are set to return to the Victoria, Central, Jubilee, Northern and Piccadilly lines.

Bosses want all drivers on the London Underground to work weekend and night shifts, on top of day shifts. They had previously promised to recruit a workforce specifically to run Night Tube services.

Des Rice, an RMT health and safety rep, joined the picket line at Brixton station in south London.  “The company has said there have been no job losses,” he told Socialist Worker. “But by amalgamating the Night Tube into the main rosters there are 200 positions that aren’t there anymore.

“So they’ve twisted it. This is a cut. At Brixton now, on a 90-week rota there are just 17 Saturday rest days. Family-friendly policies have gone out of the window.”

The bosses claim that workers will only have to work four night shifts a year.

But driver Peter told Socialist Worker he expects rota changes to cause “maybe 20 percent extra weekend shifts”. “The network has been financially hit, but management uses that as a reason to attack us,” he said.

“They call us ‘our people’ to justify their plans, but that’s bullshit. Management has been given a £12 million bonus to get cuts through.”

Workers are determined to continue striking until management reverses its plans to abolish the Night Tube driver grade.

Des agreed, “Management are hiding behind the pandemic, taking it out on people who have worked through it.

“I hope the strike will focus their minds.

“We also call on the mayor to stand up to the government over funding.”

Disgracefully Labour mayor of London Sadiq Khan attacked the strikers. He tweeted, “Unnecessary strike action by RMT is causing widespread disruption for millions of Londoners and will also hit London’s retail, culture and hospitality at the worst possible time.”

He should be blaming TfL bosses and standing on workers’ picket lines.

Khan then added that Night Tube “helps to improve safety for everyone, especially women and girls making their way home at night”. The implication is that strikers are endangering women.

But the strikers are not opposed to Night Tube—they just want to defend a safe system with proper staffing.

Every trade unionist and campaigner should build solidarity for the Tube workers’ strikes.

Set the Night on Fire: L.A. in the Sixties – book review

Would you trust the spies planning your assassination to keep you safe?