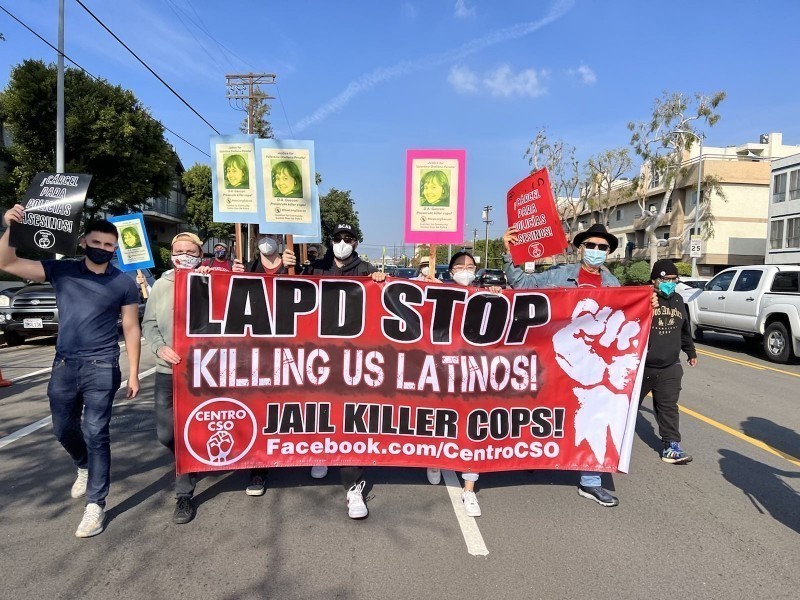 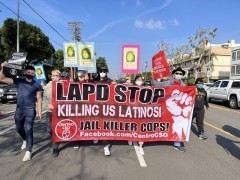 Los Angeles, CA – In the afternoon of January 8, community organizations marched through North Hollywood to demand justice for Valentina Orellana-Peralta, a 14-year-old who was killed by LAPD officer William Dorsey Jones Jr.

On December 23, Orellana-Peralta was in a changing room with her mother at a Burlington store in North Hollywood when Jones Jr. and other LAPD officers arrived to detain Daniel Elena Lopez. Rather than de-escalate the situation, Jones Jr. immediately fired his military grade rifle and one bullet killed Daniel Elena Lopez while another pierced a wall and struck Orellana-Peralta who died in her mother’s arms.

Orellana-Peralta had just immigrated to the United States from Santiago, Chile six months before her death. Orellana-Peralta attended High Tech Los Angeles in Van Nuys, excelled in school despite being an English language learner, was interested in robotics, and dreamed of becoming an engineer.

On January 8, La Raza Unida Party, Centro CSO, and other organizations met outside the Burlington store on Victory Boulevard where Jones Jr. killed Orellana-Peralta and Lopez. After Ernesto Ayala of La Raza Unida Party kicked off the protest with some chants, protesters took over Laurel Canyon Boulevard while carrying banners demanding justice for Orellana-Peralta and for LAPD to stop killing Latinos.

The march then turned down Burbank Boulevard and rallied outside of LAPD’s North Hollywood station where they called for the firing and arrest of Jones Jr. Ernesto Ayala with La Raza Unida Party gave a speech and said, “If you go home without being a part of an organization then you’ve let them [police] win! They’re organized. Are you? We fight back by being organized!”

In his speech, Carlos Montes of Centro CSO explained the need to win real reforms and to bring LAPD and the Los Angeles Sheriff’s Department under community control. Montes said, “We fight and organize for systemic change while working for civilian/community control of police. We also support the family’s demand that California Attorney General Rob Bonta prosecute LAPD killer cop Jones Jr.”

The injustice of Orellana-Peralta’s death has extended beyond Los Angeles, becoming a national and international story. On Monday, January 10, civil rights figures from across the country attended her funeral in Gardena. During Joe Biden’s congratulatory call to Gabriel Boric for winning the Chilean presidential elections, he offered condolences for Orellana-Peralta’s killing.

LAPD has placed Jones Jr. on paid administrative leave and the California Department of Justice is investigating the killing.

Plans for Centro CSO are to launch a grassroots campaign for a charter amendment that would give more power to the Civilian Oversight Commission and to potentially fire the LA Sheriff Alex Villanueva. To get involved, contact Centro CSO at (323) 943-2030, [email protected], or @CentroCSO on Instagram, Facebook, Twitter, and TikTok.

Valentina Orellana-Peralta ¡presente!14-year-old Valentina was shot to death by the Los Angeles…

Los Angeles: Rally to support the Korean Confederation of…