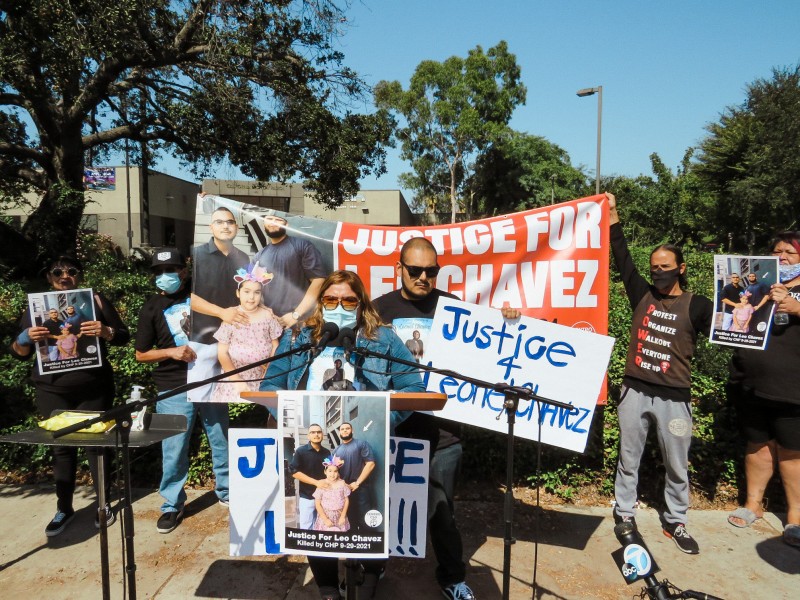 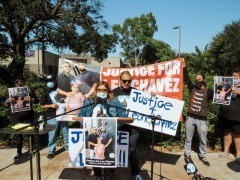 Centro CSO and the attorneys at Justice X united with the family and organized the rally to denounce police killings of Chicanos and they demanded the firing and prosecution of the CHP officers who shot and killed Chavez.

Leo Chavez worked as a security guard at a business in LA, loved to work out at a local fitness center where he was well-known and liked. He had plans to open up his own business.

Lisa Vargas, the mother of Anthony Vargas who was killed by East LA Sheriffs in 2018, led the October 9 rally. Maritza Padilla, the mother of Leo Chavez, demanded justice and prosecution of the CHP officers who killed her son. She cried and talked about missing her son. Jesus “Chuy” Chavez, Leo’s brother, denounced the CHP for the murder and also called for the prosecution of the officers. Hilda Pedroza, sister of David Ordaz Jr., killed by the East LA Sheriffs, spoke in solidarity with the Chavez Family.

Christian Contreras, an attorney with Justice X representing the family, spoke about the need to unite and keep fighting to prosecute police who kill our young Chicano men. Carlos Montes with Centro CSO spoke about the racist oppression of Chicanos and Blacks with police killings, racism and labor exploitation. He called for organizing against racist police killings and linking it to the fight for self-determination for Chicanos and for real freedom for Chicanos, Blacks and all working people in the U.S.

On October 4, the family, with attorneys Humberto Guizar & Christian Contreras, presented a business surveillance video of the killing that clearly shows the CHP officers were not in any danger. Chavez was unarmed, standing facing the CHP with his hands visibility empty.

Centro CSO is working with the Chavez family and calling on California Attorney General Rob Bonta to prosecute the two CHP officers involved in this unwarranted killing of an unarmed local resident.

Centro CSO is also supporting and participating in the National Alliance Against Racist & Political Repression (NAARPR) national conference to be held in Chicago December 4 and 5.

To join Centro CSO and fight against police killings and for Chicano liberation, send us a message. We meet the third Wednesday of the month at 6:30 p.m. via Zoom (online during the pandemic). If you wish to join the Police Brutality Committee of CSO, send us a message at [email protected], text CSO at our hotline 323-943-2030, or contact us at our various social media platforms: @CentroCSO on Facebook, Twitter, Instagram, and TikTok.