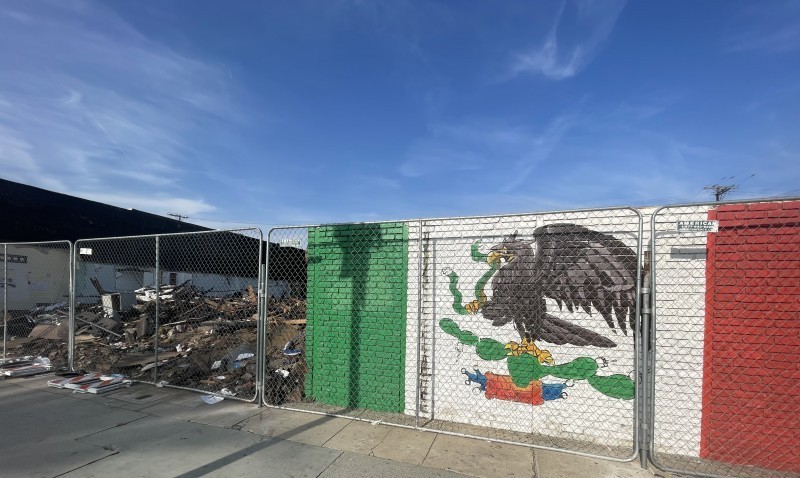 Los Angeles, CA – On Whittier Boulevard in East Los Angeles, a community is devastated and concerned over a recent string of building fires that have destroyed buildings that have landmarked the proud Chicano neighborhoods of Boyle Heights and East LA for many years. Some Eastside residents have taken the initiative to call County Supervisor Hilda Solis and voice this concern and call for an investigation. Many of these buildings are designated as historical and thus cannot be torn down without certain permits, but there is fear among residents that new pro-development owners of these properties may be using the outbreak of these fires as a means to get around legal requirements that otherwise bars such demolition.

One of the most prominent of these sites is near what many consider the gate to the Whittier Boulevard and its world-famous archway. Following the I-710 underpass headed east on Whittier Boulevard stands a mural of a Mexican flag surrounded by the ruins of two buildings which burned on separate occasions. The first was an unoccupied storefront once owned locally as a mom-and-pop, and the most recent is a local doctor’s office which was still in use. Doctors and staff were heartbroken to arrive to work only to find their clinic had burned to the ground. The only remaining structure standing is a brick wall and mural with the symbol of the Mexican nation, and to many Chicanos a symbol of pride and their own culture.

Local vendor of Boulevard and Chicano Power memorabilia, Ernie Serna, speaks of the history behind the mural, “It was painted in 1979 when the East LA Sheriffs closed down the Boulevard to cruising. Even though they closed it down and it seemed like a ghost town, that mural stood as a symbol – a beacon of hope – for the car community and for Chicanos as a whole and served as a reminder; here on Whittier Boulevard, East LA, viva la Raza.”

For a community under constant attack by forces of gentrification, the symbolic survival of this mural resonates the resilience of the Chicano community. Aquí estamos y no nos vamos!

Los Angeles: Rally to support the Korean Confederation of…