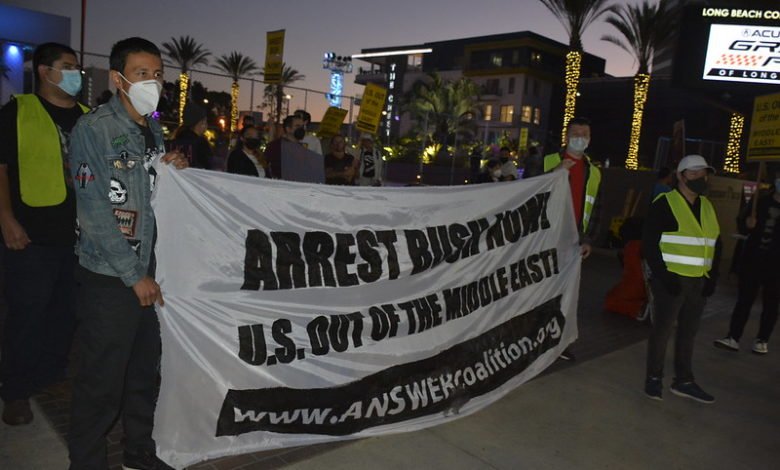 On Sunday, September 19, Bush arrived in the Saban Theater in Beverly Hills as a part of a “distinguished speaker series.” Dozens of community members gathered in front of the theater to call for his immediate arrest. The event was organized by ANSWER Coalition – Los Angeles and the participating organizations were Party for Socialism and Liberation Los Angeles, Code Pink, American Muslims for Palestine, Jewish Voice for Peace, and Jim Lafferty of the National Lawyers Guild.

“We are here protesting Bush because we understand that our interests are the same as the interests of all working and oppressed people around the world.” said Michelle Xie of the PSL. Xie explained how the Bush administration led wars of aggression against Iraq and Afghanistan and ramped up racist violence at home, while economic conditions for most Americans only worsened.

“The enemy of the Iraqi people is our enemy – the capitalist ruling class who use us workers as pawns in their system to dominate the world’s resources and wreak havoc on the global working class.” Xie stressed that as the war machine and corporate media ramp up the public for war against another country, “We need to get organized and continue to fight back!”

Inside the Saban Theatre, Iraq War veteran Mike Prysner interrupted Bush’s speech where he asked him to apologize for his crimes against humanity. Prysner was forcefully escorted outside after organizers attempted to silence him and tore up a list of names of friends killed because of the Iraq war. Prysner told Liberation News, “I don’t think George Bush deserves a single moment of peace because everyone whose life was impacted by the Iraq and Afghanistan wars hasn’t known peace.”

Similarly, on September 20, community organizations protested Bush’s speech in front of the Long Beach Terrace Theater and made it clear that Bush was not welcome in Long Beach; also organized by ANSWER Coalition – Los Angeles. The PSL  alongside Code Pink, Military Families Speak Out, Veterans for Peace, NAFCOM, DSA Long Beach and BAYAN USA were among the participating organizations.

Speakers denounced Bush, not just as an individual war criminal but as a part of the imperial war machine. Josh De Leon, a local Filipino-American activist with NAFCOM, noted that he and fellow Filipinos were children of the U.S. empire and it was their duty to stand in solidarity with the people of Afghanistan and Iraq. “Bush being in Long Beach is an insult to the people who are fighting for a better city. Bush is not a ‘distinguished figure’, but a symbol of a failed system, a system which has left so many in Long Beach behind.”

Referring to Bush’s recent rehabilitation in mainstream media, Hec Vortex, a local Puerto Rican artist and activist, said “Bush lied, people died, we don’t forget, keep the fire alive.” He also stated that as a Puerto Rican he had to support the people of Iraq against U.S. imperialism for he and his people were also victims of U.S. imperialism.

Another speaker, Louis Raprader III of Veterans for Peace, stated, “I served aboard the USS Abraham Lincoln, I witnessed Bush’s Mission Accomplished Speech, it’s then I realized I was witnessing another lie.” Pat Alviso of Military Families Speak Out said, “I am really pissed that George W. Bush is here when my son is still suffering from his war, I will continue to chase after him till he faces justice.”

No matter how much time passes or how many “distinguished speakers” events he attends to normalize his presidency, Bush will forever be remembered as a bloodthirsty criminal and an enemy of workers everywhere. In a just world, U.S. presidents would be tried for their war crimes and rot in a jail cell. Down with U.S. imperialism! Down with Bush!