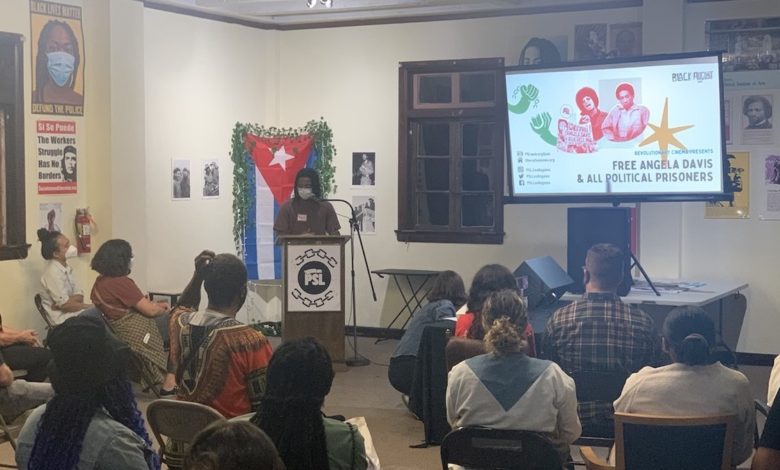 The Los Angeles branch of the Party for Socialism and Liberation held a four-part series of events around the legacy of struggle against the racist prison system here in the United States. The legacy of police brutality, mass incarceration, and repression of the Black liberation movement in Los Angeles meant that addressing this history was a vital task of the branch.

The first event was a Revolutionary Cinema screening of Free Angela and All Political Prisoners, a dramatic and invigorating story of Angela Davis’s life, the struggle to free the Soledad Brothers, and Angela’s own fight for freedom after the Marin County Courthouse Rebellion in August 1970. The night closed with discussion around the film’s significance.

Second, the branch held a study group meant to serve as an introduction to Black August and political prisoners. This event studied the significance of the sacrifices of George Jackson and the need to continue commemorating Black August, using the article “Study, fast, train, fight: The roots of Black August” by Joe Tache.

Third, members participated in a study group on Black radical feminism and the struggles of Black socialist women for their freedom. This event was dynamic, touching on the lives of socialist organizers Willianna Burroughs and Claudia Jones before ending on the significance of the Combahee River Collective and the August Rebellion of 1974 in the Bedford Hills Correctional Facility in the state of New York.

The final event within August was a forum on the history of Black rebellion in Los Angeles. As a city which has served as the explosive center of several mass rebellions throughout U.S. history, Los Angeles’s 1965 and 1992 rebellions shook the world and changed the course of history, politics, and race relations across the country. This was an opportunity to examine the root causes of rebellions stretching from the Watts Rebellion to the 2020 national rebellion against racism, with the goal of walking away with an understanding of how to create a better future for all.

Finally, in solidarity with the August 21 – September 9 National Shut ‘Em Down weeks of action called by Jailhouse Lawyers Speak, the PSL in Los Angeles has a march and rally set for September 4 at 12 PM. This march will carry the message of liberation and abolition from the Men’s Central Jail to the Metropolitan Detention Center with a message of unity against police brutality, mass incarceration, and racist detentions.