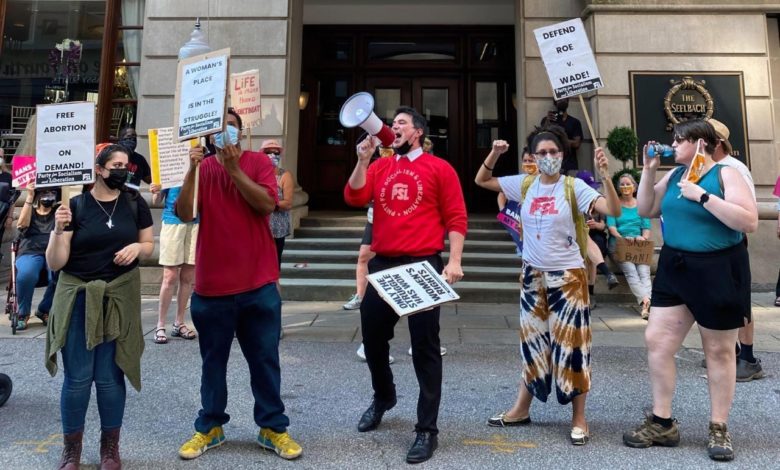 On September 12, activists in Louisville took to the streets to march in outraged response to the Texas SB 8 anti-abortion bill that went into effect on September 1. Over 100 protesters showed their solidarity with the reproductive rights movement with signs and chants like, “My body! My right! We won’t give up without a fight!”

In addition to Texas authorities, the demonstrators also expressed anger at the U.S. Supreme Court, which upheld the Texas law. U.S. Supreme Court Justice Amy Coney Barrett held a talk at the Seelbach Hotel in downtown Louisville on Sunday where she unconvincingly insisted to the crowd that the U.S. Supreme Court “isn’t a bunch of partisan hacks”. Kentucky Senator Mitch McConnell was also in attendance. The march culminated in a rally in front of the hotel where the talk was being held.

The fight for reproductive freedom is particularly salient to activists in Louisville. The city currently has the only licensed abortion clinic in Kentucky, EMW Women’s Surgical Center, making abortion access largely inaccessible to the majority of the state. For those who are able to make the trip to Louisville for abortion care, there are other barriers waiting: for example, aggressive anti-choice protesters and, next door to EMW, an anti-abortion office which ridiculously calls itself a “crisis pregnancy center.” This center is designed to intentionally trick clients of EMW into going into the wrong building, where they will instead be offered ultrasounds and “life skills education.”

Kentucky has a host of anti-abortion laws on the books, including a “trigger law” passed in 2019 which would automatically ban abortion in the event that Roe v. Wade is overturned. Additionally, there is a ballot initiative set for 2022 which would amend the Kentucky state constitution to declare that nothing in the document protects a right to abortion or requires the funding of abortion. Protestors in Louisville showed up on Sunday with the intent to let Barrett and McConnell know they will not let these egregious attacks on reproductive freedom go without a response.

“This issue is important to me because it’s clear how inseparable it is from collective liberation,” said Dave Neill, a Party for Socialism and Liberation member in Louisville and a volunteer clinic escort, “That working and oppressed people can exercise bodily autonomy is a precondition of liberation. How could it be otherwise?”

Information and resources for seeking abortion care in Kentucky can be found here.