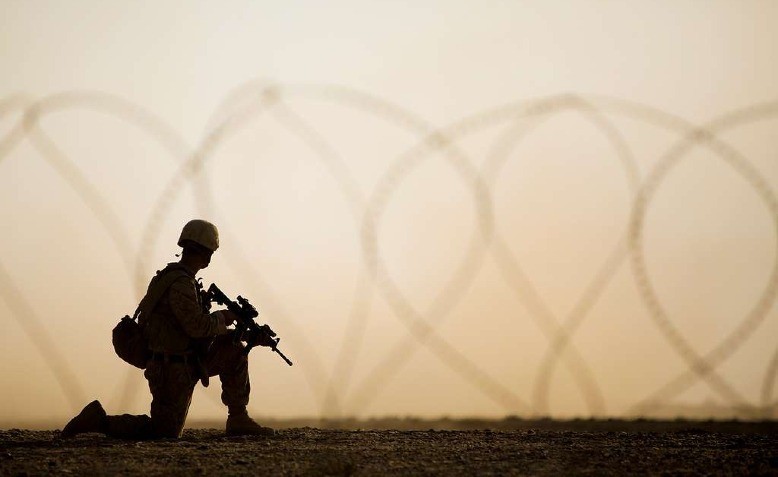 More war will not help the people of Afghanistan or anywhere else and those still arguing for “humanitarian intervention” are living in a fantasy, argues Shabbir Lakha

This is manifestly not Saigon,’ insisted US Secretary of State Anthony Blinken on Sunday morning, even while US embassy staff were being rapidly evacuated in helicopters by the military. But whether he admits it or not, the end of the Afghan episode of the War on Terror is a decisive defeat for the US empire.

The news on Monday was awash with horrific scenes of desperate Afghans at Kabul airport trying to flee the country. Footage showed people trying to grab on to a US military jet as it took off, reportedly killing seven. Videos surfaced of people who had managed to cling on to the underside of departing planes falling to their deaths. The US military brought in Apache helicopters to chase people off the runways, and at least three were shot dead.

This was the backdrop to President Biden’s speech later in the day where he concluded: ‘The events we’re seeing now are sadly proof that no amount of military force would ever deliver a stable, united, and secure Afghanistan — as known in history as the ‘graveyard of empires’.’ After twenty years of a bloody war that destroyed the country and cost over 240,000 lives, Biden was admitting what anti-war campaigners had warned would happen from the start.

How did the West get it so wrong?

Less than a week ago, a leaked US intelligence report estimated Kabul could come under Taliban attack in thirty days, and the government could fall within ninety. This was revised down from the June estimate of the government lasting at least six months after US withdrawal. By Sunday, the Taliban had taken the Presidential Palace in Kabul and President Ghani had fled the country.

While mainstream commentators are shocked and the various echelons of the US state blame each other for a failure in intelligence or a failure in policy, the truth is that this was entirely predictable. The Taliban was already in control of more than half the country for the last year and their military power has only grown in that time – which is why the Trump administration was negotiating with them at all.

Any honest reporting of the situation in Afghanistan would have exposed that the Western-installed Ghani government had very little support in the country and was entirely propped up by the US’s military might. Unsurprisingly, people don’t support a puppet government set up by the foreign invaders that are occupying and bombing them.

Contrary to the emerging consensus in the mainstream media and among neoconservative politicians, the mistake wasn’t with the manner of the US’s departure – it was that it began the war in Afghanistan at all.

George Bush was clear when he announced the US had begun its invasion of Afghanistan: the goal was to ‘attack the military capability of the Taliban regime’ to ‘disrupt the use of Afghanistan as a terrorist base of operations’. With the Taliban back in power and stronger than it was in 2001, and with ISIS now operating in the country, the US has by all accounts failed.

As argued by people like Jeremy Corbyn at the time, the killing of civilians and the destabilisation of the country that the war would bring would only provide a breeding ground for terrorist groups. Just like the invasion of Iraq created the conditions first for Al Qaeda to set up, and then for ISIS to be formed, the devastation of Syria, Libya, Somalia, and Afghanistan have allowed ISIS to gain a foothold in these countries.

One of the lies concocted by Bush and Blair to justify going to war with Afghanistan and which is again resurfacing to argue it shouldn’t be ended is that of ‘humanitarian intervention’. People are rightly horrified by what the prospect of a reactionary organisation like the Taliban being in power means for the Afghan people, particularly women and girls.

Biden put paid to any misconceived notions of US benevolence when he categorically stated that ‘Our mission in Afghanistan was never supposed to have been nation building. It was never supposed to be creating a unified, centralised democracy.’ This, of course, directly contradicts what both Bush and Blair claimed at the time when they named the war ‘Operation Enduring Freedom’ and said their actions were meant to liberate Afghans and bring democracy to the country.

But Biden is right that that’s not what the US was actually trying to do. During the course of the last twenty years, the US dropped over 300,000 bombs on Afghanistan, killing an estimated 70,000 civilians, at least forty-three percent of them women. None of the $2.2 trillion the US spent on its war and only a fraction of the aid given to Afghanistan has been spent on improving the lives of Afghans. There has been very little if any development outside of Kabul and a few big cities, which has meant that poverty has only deepened; over two thirds of girls outside Kabul haven’t had access to primary school education.

The war in Afghanistan was never about humanitarianism, democracy, or protecting women – and those now arguing that Western military engagement is needed to protect Afghan people are simply lying.

In the eyes of the right-wing political and media establishment, not actively bombing a country is ‘doing nothing’. Lisa Nandy wrote on Twitter that the government should ‘have the courage’ to oppose the US in ‘abandoning the Afghan people’. But the series of Western failures in Iraq, Syria, Libya, Yemen, and Afghanistan have made it abundantly clear for anyone not itching to drop bombs that military intervention does not work – least of all for the people on the receiving end.

The same Western leaders who we’re supposed to believe want to help the people of Afghanistan have been loudest in refusing to support refugees. President Macron has already talked about stepping up EU efforts to ‘protect itself from a wave of migrants, and the Home Office has reportedly been ‘reluctant’ to accept refugees because of ‘the message it will send other refugees’.

Since 2008, more than 70,000 Afghan refugees have been sent back from Europe to Afghanistan under the claim that it is a safe country. Britain sits at the top of the list, having deported over 15,000 Afghans and having spent £4 million on a ‘reintegration centre’ in Kabul.

One of tangible things that we can now do is to provide safe passage for refugees, end sanctions on countries like Iran where the bulk of refugees will inevitably end up, and provide the financial support needed to help undo the destruction our imperialist wars have caused. This is what we need to call for now, and we should be clear that more war will not help the people of Afghanistan or anywhere else. There is nothing humanitarian in the intentions of those arguing for it.