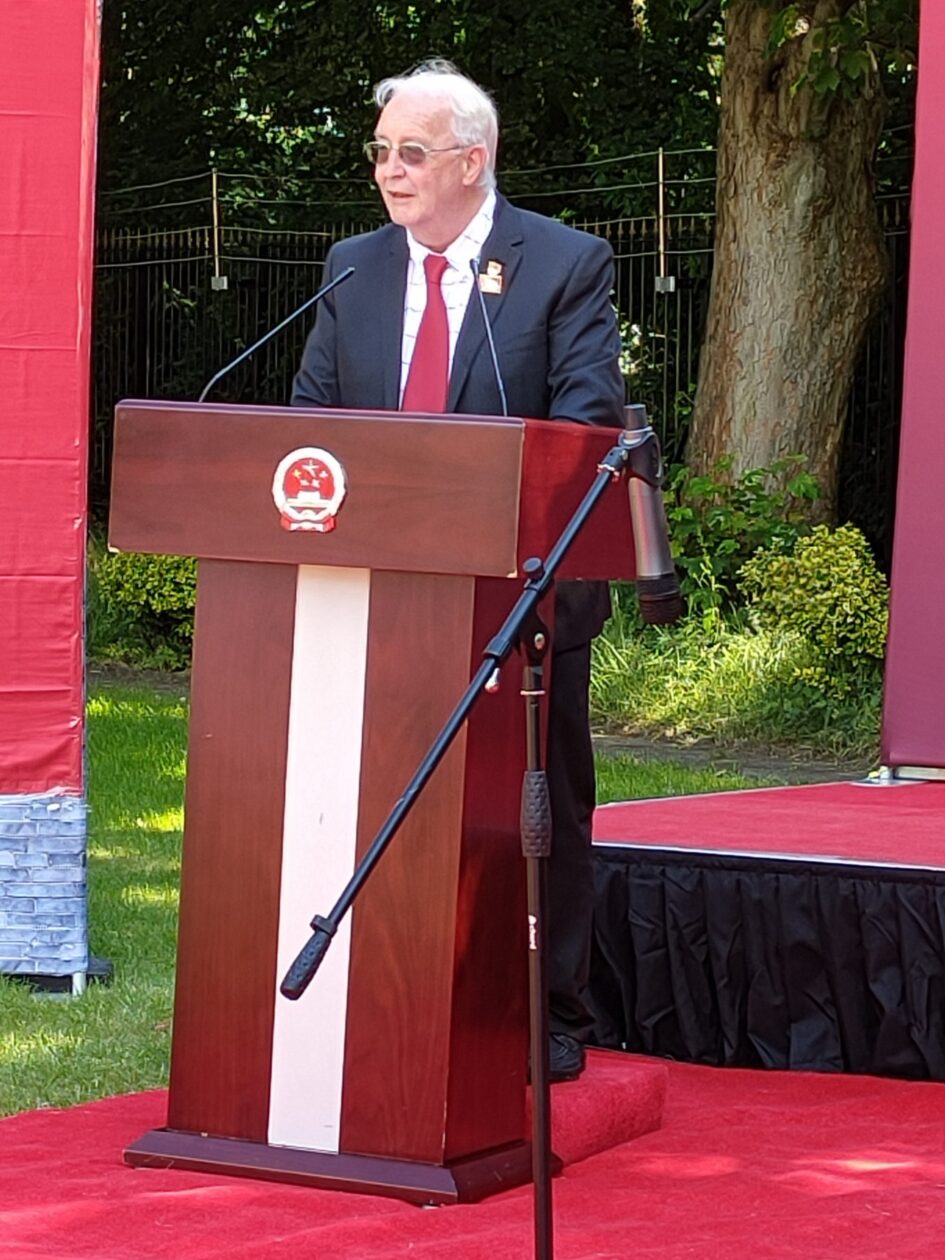 Communist Party general secretary Rob Griffths attended a recent celebration of the centenary of the CPC, held in Manchester.

I bring greetings to the Consulate and its staff in Manchester of the People’s Republic of China from the Communist Party of Britain, its Executive Committee and its members.

I also bring you a message of solidarity and best wishes from the Indian Workers Association and the members of the CPB in Derby, where we had a rally this morning in solidarity with the small farmers and labourers in India.

We are delighted to join you in celebrating the centenary of the Communist Party of China.

Communists, socialists and progressives in other countries can draw inspiration from the heroic struggles of the CPC and the Chinese people to defeat imperialist occupation, achieve mass literacy, secure equal status for women and national and ethnic minorities, develop modern industry, make great advances in education and science, and – most recently – score the biggest victory over poverty in human history.

Now, in the finest internationalist tradition of the communist movement, China wishes to assist other countries and peoples to accelerate their own economic and social development through the ‘Belt and Road’ initiative.

I have been fortunate enough to have visited China six times since 2006, as a member of British, Western European or international Communist delegations. We travelled extensively, visiting villages, towns and cities from the Xinjiang Autonomous Region in the west to Ningbo on the east coast, from Beijing to Shenzhen next to Hong Kong.

Far from making me feel like an expert on China, these experiences have taught me how much I have still to learn about the country and its peoples. Nonetheless, I have learned enough to know that the scale of economic and social development across China has been epoch-making.

China is on course to achieve in 50 years what took Britain, for example, 200 years to achieve – and to do so without an international system of slavery and colonial plunder.

This has been made possible by the planned nature of economic and social development, with key industries and services under public ownership or control, directed and led by the Communist Party of China through its mass organisations and the established institutions of state.

The achievements of the CPC are undeniable and are there for all to see. But our Chinese comrades not only display them with modesty – they are ready to discuss and evaluate them – including shortcomings as well as strengths – with other Communists from around the world.

My time in Urumqi, the capital of the Xinjiang Autonomous Region, was an eye-opener. Everywhere we went, including the local open-air market, we heard most of the people speaking the Uyghur language. It was the first language on public signs and notices and our interpreters from the CPC International Department in Beijing had to be replaced by local interpreters – because the municipal and party leaders we met in Urumqi preferred to speak in their own native tongue.

Imagine our surprise, then, when arriving back in Britain to read a report in the Guardian newspaper about an address to the EU Parliament by the president of the US-funded World Uyghur Congress. He told MEPs that in Xinjiang the Uyghur language was banned, public notices were in Han Chinese only and the top officials there were all Han Chinese!

We had just been there and seen the complete opposite.

The moral of this story? Never take at face value reports about China in the Western media – except those in the Morning Star.

Internationally, China remains a voice of sanity and a source of hope for many millions of people around the world.

Despite the Western lies and imperialist provocations, the Chinese party, government and state maintain their policy of military self-containment and support for the peaceful settlement of international disputes.

Nevertheless, jealous of China’s achievements, Britain, the US, Australia and EU member states are trying to whip up a new Cold War.

The CPC and our many Chinese friends and comrades in Britain can rest assured that Britain’s Communists are doing all in our power to combat the lies and distortions being peddled by Western politicians, military chiefs and the mass media.

After one hundred years of solidarity between the CPC and the Communist Party in Britain against imperialism, we say:

The Organic Intellectuals in China