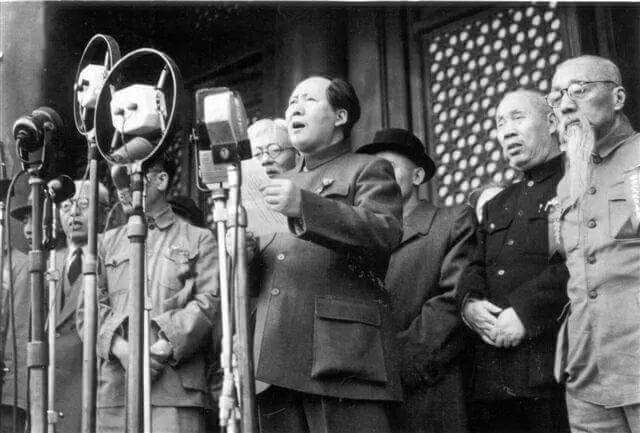 To mark the October 1, 1949 proclamation of the Peoples Republic of China, Fight Back! is circulating a statement that the outstanding Chinese revolutionary Mao Zedong made at the opening address at the First Plenary Session of the Chinese People’s Political Consultative Conference on September 21, 1949.

The Political Consultative Conference so eagerly awaited by the whole nation is herewith inaugurated.

Our conference is composed of more than six hundred delegates, representing all the democratic parties and people’s organizations of China, the People’s Liberation Army, the various regions and nationalities of the country and the overseas Chinese. This shows that ours is a conference embodying the great unity of the people of the whole country.

It is because we have defeated the reactionary Kuomintang government backed by U.S. imperialism that this great unity of the whole people has been achieved. In a little more than three years the heroic Chinese People’s Liberation Army, an army such as the world has seldom seen, crushed all the offensives launched by the several million troops of the U.S.-supported reactionary Kuomintang government and turned to the counter-offensive and the offensive. At present the field armies of the People’s Liberation Army, several million strong, have pushed the war to areas near Taiwan, Kwangtung, Kwangsi, Kweichow, Szechuan and Sinkiang, and the great majority of the Chinese people have won liberation. In a little more than three years the people of the whole country have closed their ranks, rallied to support the People’s Liberation Army, fought the enemy and won basic victory. And it is on this foundation that the present People’s Political Consultative Conference is convened.

Our conference is called the Political Consultative Conference because some three years ago we held a Political Consultative Conference with Chiang Kai-shek’s Kuomintang.[1] The results of that conference were sabotaged by Chiang Kai-shek’s Kuomintang and its accomplices; nevertheless the conference left an indelible impression on the people. It showed that nothing in the interest of the people could be accomplished together with Chiang Kai-shek’s Kuomintang, the running dog of imperialism, and its accomplices. Even when resolutions were reluctantly adopted, it was of no avail, for as soon as the time was ripe, they tore them up and started a ruthless war against the people. The only gain from that conference was the profound lesson it taught the people that there is absolutely no room for compromise with Chiang Kai-shek’s Kuomintang, the running dog of imperialism, and its accomplices — overthrow these enemies or be oppressed and slaughtered by them, either one or the other, there is no other choice. In a little more than three years the Chinese people, led by the Chinese Communist Party, have quickly awakened and organized themselves into a nation-wide united front against imperialism, feudalism, bureaucrat-capitalism and their general representative, the reactionary Kuomintang government, supported the People’s War of Liberation, basically defeated the reactionary Kuomintang government, overthrown the rule of imperialism in China and restored the Political Consultative Conference.

Fellow Delegates, we are all convinced that our work will go down in the history of mankind, demonstrating that the Chinese people, comprising one quarter of humanity, have now stood up. The Chinese have always been a great, courageous and industrious nation; it is only in modern times that they have fallen behind. And that was due entirely to oppression and exploitation by foreign imperialism and domestic reactionary governments. For over a century our forefathers never stopped waging unyielding struggles against domestic and foreign oppressors, including the Revolution of 1911 led by Dr. Sun Yat-sen, our great forerunner in the Chinese revolution. Our forefathers enjoined us to carry out their unfulfilled will. And we have acted accordingly. We have closed our ranks and defeated both domestic and foreign oppressors through the People’s War of Liberation and the great people’s revolution, and now we are proclaiming the founding of the People’s Republic of China. From now on our nation will belong to the community of the peace-loving and freedom-loving nations of the world and work courageously and industriously to foster its own civilization and well-being and at the same time to promote world peace and freedom. Ours will no longer be a nation subject to insult and humiliation. We have stood up. Our revolution has won the sympathy and acclaim of the people of all countries. We have friends all over the world.

Our revolutionary work is not completed, the People’s War of Liberation and the people’s revolutionary movement are still forging ahead and we must keep up our efforts. The imperialists and the domestic reactionaries will certainly not take their defeat lying down; they will fight to the last ditch. After there is peace and order throughout the country, they are sure to engage in sabotage and create disturbances by one means or another and every day and every minute they will try to stage a come-back. This is inevitable and beyond all doubt, and under no circumstances must we relax our vigilance.

Our state system, the people’s democratic dictatorship, is a powerful weapon for safeguarding the fruits of victory of the people’s revolution and for thwarting the plots of domestic and foreign enemies for restoration, and this weapon we must firmly grasp. Internationally, we must unite with all peace-loving and freedom-loving countries and peoples, and first of all with the Soviet Union and the New Democracies, so that we shall not stand alone in our struggle to safeguard these fruits of victory and to thwart the plots of domestic and foreign enemies for restoration. As long as we persist in the people’s democratic dictatorship and unite with our foreign friends, we shall always be victorious.

The people’s democratic dictatorship and solidarity with our foreign friends will enable us to accomplish our work of construction rapidly. We are already confronted with the task of nation-wide economic construction. We have very favourable conditions: a population of 475 million people and a territory of 9,600,000 square kilometres. There are indeed difficulties ahead, and a great many too. But we firmly believe that by heroic struggle the people of the country will surmount them all. The Chinese people have rich experience in overcoming difficulties. If our forefathers, and we also, could weather long years of extreme difficulty and defeat powerful domestic and foreign reactionaries, why can’t we now, after victory, build a prosperous and flourishing country? As long as we keep to our style of plain living and hard struggle, as long as we stand united and as long as we persist in the people’s democratic dictatorship and unite with our foreign friends, we shall be able to win speedy victory on the economic front.

An upsurge in economic construction is bound to be followed by an upsurge of construction in the cultural sphere. The era in which the Chinese people were regarded as uncivilized is now ended. We shall emerge in the world as a nation with an advanced culture.

Our national defense will be consolidated and no imperialists will ever again be allowed to invade our land. Our people’s armed forces must be maintained and developed with the heroic and steeled People’s Liberation Army as the foundation. We will have not only a powerful army but also a powerful air force and a powerful navy.

Let the domestic and foreign reactionaries tremble before us! Let them say we are no good at this and no good at that. By our own indomitable efforts, we the Chinese people will unswervingly reach our goal.

The heroes of the people who laid down their lives in the People’s War of Liberation and the people’s revolution shall live forever in our memory!

Hail the victory of the People’s War of Liberation and the people’s revolution!

Hail the founding of the People’s Republic of China!

Hail the triumph of the Chinese People’s Political Consultative Conference!

Can the Chinese Diaspora Speak?