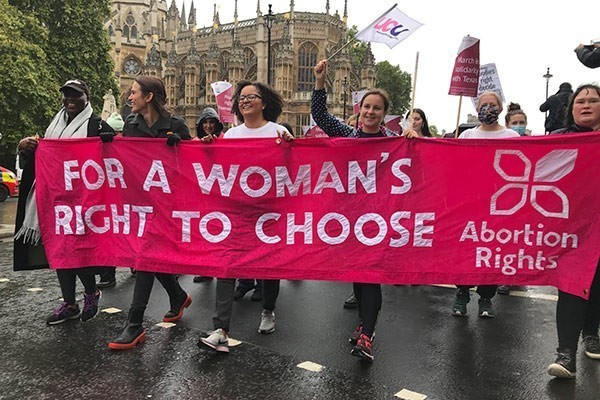 Tens of thousands of pro-choice activists were set to join 660 separate mobilisations across the US on Saturday.

A law banning abortion after six weeks in the US state of Texas has sparked rage across the country and globally.

The bill will criminalise abortion providers, health workers who perform abortions and even those who help women to reach abortion clinics.

Already two doctors have appeared in court for performing an abortion after the six week cut off point.

Rachel O’Leary, the executive director of Women’s March, said the Texas law is “kind of a break-glass moment for folks all across the country.

“Many of us grew up with the idea that abortion would be legal and accessible for all of us, and seeing that at very real risk has been a moment of awakening,” she said.

Carmona added that the number of marches scheduled for Saturday is second only to the protests organised after president Donald Trump’s inauguration in 2017.

Protests were called in solidarity with those in the US in Britain and Ireland, including London, Cardiff, Edinburgh, and Belfast.

In London a couple of hundred protesters joined a march from Trafalgar Square to the US embassy.

Kerry Abel chair of Abortion Rights which organised the protest pointed out the implications of the Texas bill on Roe vs Wade. This is the 1973 ruling that enshrines some rights to abortion across the US.

“Anti-choice politicians in other states outside of Texas, like Florida are seeing that it’s possible to work around Roe vs Wade.”

“This makes it even more important to fight back in the US and in Britain. We need to say that abortion is healthcare. It’s lifesaving and necessary.

Protester Sarah called out the hypocrisy of anti-choice politicians in the US.

“How can you say that you are pro-life when you don’t want to help children?

“The right very clearly has no interest in helping the thousands of migrant children who are struggling at the US border at the moment.” Eliza said that it was essential to stand in solidarity with women across the world.

She pointed out that “once one group of women get their rights taken away, everyone’s rights can get taken away.”

Eliza also added that Britain still has a long way to go for women to have full access to abortion on demand and without harassment.

During lockdown, women were able to take abortion pills from home. However, there are now fears that this right will be taken away.

Protester Ashleigh said that this move would be just another way to control women’s bodies.

“If abortion pills could be taken safely at home over lockdown, why not now?  It’s just another way to make abortions harder and less accessible to women.”

As the march made its way to the US embassy, activists chanted, “Not the church, not the state, women will decide their fate” and “My body my choice”.

Ashleigh also said there is an important class element to abortion rights.

“The Tories’ cuts to Universal Credit and higher National Insurance contributions will make life a lot harder for women. Fighting for abortion rights has never been so important,” she said.

The march was joined by trade unionists from Unison, NEU and UCU, who brought their banners.