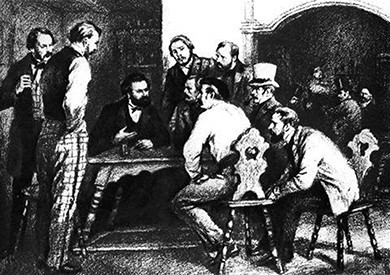 Nothing illustrates the difference between Marx’s view of how the capitalist system could be superseded and replaced by a society under the rule of the working class, and the view of most modern ‘Marxists’, than the role of workers’ cooperatives in their respective social and political programmes.

Marx is often criticised for not providing a blueprint of ‘what socialism would look like’ or ‘how it would work’, but for him the answer to these questions arises already within capitalism, in fact through its development its beginnings appear before our very eyes.  There is no point in speculating on what is not there or on future general arrangements beyond what is already developing.

‘We do not anticipate the world with our dogmas but instead attempt to discover the new world through the critique of the old  . . . This does not mean that we shall confront the world with new doctrinaire principles and proclaim: Here is the truth, on your knees before it! It means that we shall develop for the world’s new principles from the existing principles of the world. We shall not say: Abandon your struggles, they are mere folly; let us provide you with true campaign-slogans. Instead, we shall simply show the world why it is struggling, and consciousness of this is a thing it must acquire whether it wishes or not.’ (Marx to Ruge)

So the alternative already grows within capitalism and the working class must become conscious of it:

‘They ought to understand that, with all the miseries it imposes upon them, the present system simultaneously engenders the material conditions and the social forms necessary for an economical reconstruction of society. Instead of the conservative motto: “A fair day’s wage for a fair day’s work!” they ought to inscribe on their banner the revolutionary watchword: “Abolition of the wages system!’ (Marx, Value, Price and Profit)

“The co-operative factories of the labourers themselves represent within the old form the first sprouts of the new, although they naturally reproduce, and must reproduce, everywhere in their actual organisation all the shortcomings of the prevailing system. But the antithesis between capital and labour is overcome within them, if at first only by way of making the associated labourers into their own capitalist, i.e., by enabling them to use the means of production for the employment of their own labour. They show how a new mode of production naturally grows out of an old one, when the development of the material forces of production and of the corresponding forms of social production have reached a particular stage. Without the factory system arising out of the capitalist mode of production there could have been no co-operative factories. Nor could these have developed without the credit system arising out of the same mode of production.”

“The credit system is not only the principal basis for the gradual transformation of capitalist private enterprises into capitalist stock companies, but equally offers the means for the gradual extension of co-operative enterprises on a more or less national scale. The capitalist stock companies, as much as the co-operative factories, should be considered as transitional forms from the capitalist mode of production to the associated one, with the only distinction that the antagonism is resolved negatively in the one and positively in the other”

“After the failure of the Revolution of 1848, all party organizations and party journals of the working classes were, on the Continent, crushed by the iron hand of force. . .  All the efforts made at keeping up, of remodelling, the Chartist movement failed signally; the press organs of the working class died one by one of the apathy of the masses, and in point of fact never before seemed the English working class so thoroughly reconciled to a state of political nullity. If, then, there had been no solidarity of action between the British and the continental working classes, there was, at all events, a solidarity of defeat.”

“And yet the period passed since the Revolutions of 1848 has not been without its compensating features. We shall here only point to two great factors”.

“But there was in store a still greater victory of the political economy of labour over the political economy of property. We speak of the co-operative movement, especially the co-operative factories raised by the unassisted efforts of a few bold “hands”. The value of these great social experiments cannot be overrated. By deed instead of by argument, they have shown that production on a large scale, and in accord with the behests of modern science, may be carried on without the existence of a class of masters employing a class of hands; that to bear fruit, the means of labour need not be monopolized as a means of dominion over, and of extortion against, the labouring man himself; and that, like slave labour, like serf labour, hired labour is but a transitory and inferior form, destined to disappear before associated labour plying its toil with a willing hand, a ready mind, and a joyous heart. In England, the seeds of the co-operative system were sown by Robert Owen; the workingmen’s experiments tried on the Continent were, in fact, the practical upshot of the theories, not invented, but loudly proclaimed, in 1848.”

“At the same time the experience of the period from 1848 to 1864 has proved beyond doubt that, however, excellent in principle and however useful in practice, co-operative labour, if kept within the narrow circle of the casual efforts of private workmen, will never be able to arrest the growth in geometrical progression of monopoly, to free the masses, nor even to perceptibly lighten the burden of their miseries. . . To save the industrious masses, co-operative labour ought to be developed to national dimensions, and, consequently, to be fostered by national means.”

“Yet the lords of the land and the lords of capital will always use their political privileges for the defence and perpetuation of their economic monopolies. So far from promoting, they will continue to lay every possible impediment in the way of the emancipation of labour .  .  .  . To conquer political power has, therefore, become the great duty of the working classes. They seem to have comprehended this, for in England, Germany, Italy, and France, there have taken place simultaneous revivals, and simultaneous efforts are being made at the political organization of the workingmen’s party.” (Marx, Inaugural Address of the International Workingmen’s Association)

Thus, Marx’s support for workers’ cooperatives is best known for its inclusion in the political foundations of the First International, but this was not the first or only occasion in which he expressed such views, which serves to rebut the idea that his support was somehow forced upon him as a concession to the other disparate forces within the International.  And what again is sometimes held up as a disadvantage — that he could not set out his ideas without constraint and in full scientific explanation — is also of some advantage, in that he had to speak to workers in a language that they would most easily understand.

The Inaugural Address to the First International has therefore been partially dismissed on similar grounds to those by which the 1859 Preface to ‘A Contribution to the Critique of Political Economy’ has been heavily criticised.  Such criticism must be rejected for very much the same reasons as we have set out before.

The Preface of 1859 was part of a book that was seen as a publication of the ‘Marx party’, understood as a current of thought, as a broad political movement, and as a political statement:

Writing to Lassalle on 12 November 1858 he wrote that:

“I have a twofold motive for not allowing this work to be spoiled on medical grounds:

2. In it an important view of social relations is scientifically expounded for the first time.

Hence I owe it to the Party that the thing shouldn’t be disfigured by the kind of heavy, wooden style proper to a disordered liver.”

Writing a few months later to Weydemeyer he stated that “I hope to win a scientific victory for our party.”