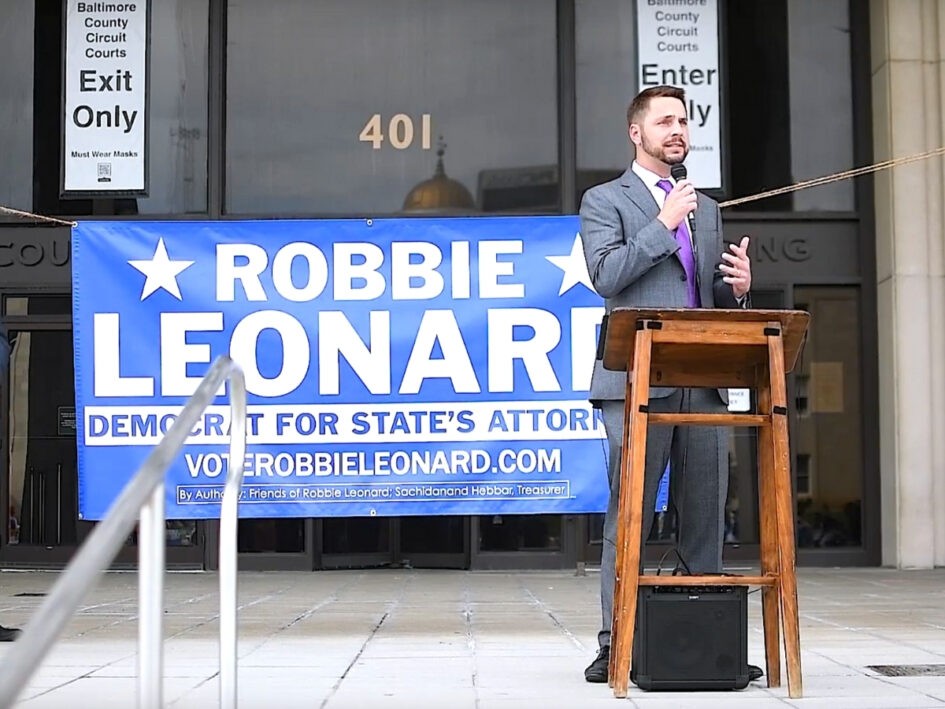 Baltimore County State’s Attorney Scott Shellenberger, notorious for his opposition to criminal justice and police reforms, is facing a primary opponent for the first time since he took office 15 years ago: Robbie Leonard, an attorney and activist, will face off against Shellenberger in next year’s Democratic primary.

Leonard is an attorney and activist who serves as the secretary of Maryland Democratic Party, and recently represented plaintiffs who successfully sued Gov. Larry Hogan for illegally ending federal unemployment benefits for thousands of Marylanders. Before starting a private practice last year, Leonard represented hundreds of lead poisoning victims seeking remuneration from their landlords. Leonard also worked at the Office of the Baltimore City Public Defender from 2008-2012.

“Scott and I were on opposite sides of every piece of legislation 10 years ago, when I was in the Public Defender’s Office working on their government relations team,” Leonard said. “He wanted to keep the death penalty. I wanted to repeal it. He wanted to send people to jail for marijuana. I wanted to legalize it, and the list goes on.”

Shellenberger opposed making allegations of police abuse public, and penalties for cops who refuse to use their body camera to record interactions with civilians. He also opposed a measure that would require the state prosecutor to investigate allegations of excessive force and criminal misconduct among police. He argued against reducing sentences for inmates sentenced to prison before the age of 25, or are over 60 and had already served lengthy prison terms—and he has defended charging juveniles as adults.

In 2015, Shellenberger called for Hogan to reinstate the death penalty, which was abolished in 2013 after advocates exposed it was deeply racist in its application.

Local activist and artist Duane “Shorty” Davis has long been a critic of Shellenberger, after Shellenberger’s office charged Davis with making a bomb threat after Davis left one of his pieces of art—the kind of decorated toilet he often leaves in public to, as Davis says, “potty train politicians”—in front of a county courthouse. Davis was ultimately found not guilty.

Leonard says he fundamentally disagrees with many of Shellenberger’s positions, and would take a drastically different approach to being state’s attorney.

“Instead of focusing on petty offenses and saddling somebody with a criminal record that’s going to affect the rest of their lives, we need to be focusing our attention on the crimes that actually matter where there’s victims involved, specifically in areas of sexual assault, sexual violence, child abuse, child molestation,” Leonard said.

In 2018, Shellenberger was part of a federal class action lawsuit from rape surviors for allegedly obstructing justice, and sending police to a victims’ house to threaten them with arrest if she continued to press charges, as the Baltimore Brew reported.

Leonard told Battleground Baltimore he has been meeting with women’s groups who advocate for sexual assault survivors.

“They know that it’s time for a change and they support my candidacy,” Leonard said.