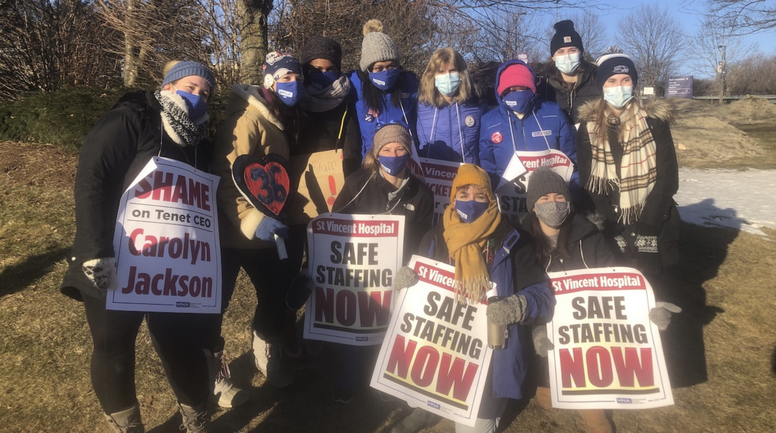 On January 3, St. Vincent nurses voted overwhelmingly to ratify a tentative agreement with their employer, Tenet Healthcare, by a margin of 487-9. The contract ratification ended a 301-day strike of 700 nurses represented by the Massachusetts Nurses Association (MNA) – the longest nurses strike in Massachusetts history and nationwide in 15 years. Amidst a surge of labor organizing over the past year, this has been one of the longest strikes across the country, paralleling the ongoing Warrior Met Coal strike. The striking nurses ultimately won staffing improvements, a guarantee they could return to their jobs, workplace safety protections, pay increases, and enhanced health insurance benefits for some nurses.

The strike began on March 8, 2021, International Women’s Day. The strike started around issues of safe staffing, with nurses filing over 500 reports detailing concerns for patient safety. At a time when COVID cases were putting a major strain on hospitals and negatively affecting healthcare, St. Vincent was no exception. According to an MNA press release, nurses reported increases in patient falls, preventable bed sores, potentially dangerous delays in patients receiving necessary medications due to lack of appropriate staffing and excessive patient assignments. Over 100 nurses left St. Vincent due to these conditions, many to facilities that implement the safer staffing practices that the striking nurses demanded.

In an interview with GBH News, St. Vincent nurse Dominique Muldoon said, “The nursing field has been through so much in the last couple of years. We went from being healthcare heroes, and then we struggled and started getting sick ourselves, and some of us even died during the pandemic. I would hope that some things, some attitudes change because of this strike.”

Tenet Healthcare fought back brutally against the striking nurses, and it soon became a fight for these nurses to even retain their right to job security. The corporation hired permanent replacement nurses, threatening the jobs of striking nurses. In an attempt to squash the worker’s struggle, Tenet supported the scabs’ in organizing against the strike and reclaiming the term for themselves, sporting T-shirts that read “Support Colleagues Above Bullying” to try to slander the striking nurses. Additionally, patients reported insufficient care by these replacement nurses, saying they were unfamiliar with the hospital and its procedures.

One patient was even attacked and injured by a fellow patient, requiring surgery after the incident. Additionally, during his stay, a nurse tried to give him incorrect medication. Although the patient didn’t have an opinion on the strike, he cited severe understaffing when reflecting on his subpar care at St. Vincent. The unsafe staffing conditions that forced the St. Vincent nurses to strike were putting patients in severe jeopardy, and not even a patient assault was enough to motivate Tenet to negotiate in good faith.

While patients continued to suffer under Tenet Healthcare’s intransigence with the hospital scaling back services rather than negotiating with striking nurses, the hospital doubled down against the strike by implementing intimidation techniques. Throughout the course of the strike over $4 million was spent on police detailing and security cameras were installed to monitor the picket line. On top of this, the striking nurses accused the hospital of a practice known as “patient dumping,” where hospitals forcibly eject patients without insurance or who cannot afford treatment. These patients were left outside unattended until the striking nurses offered care, demonstrating the ruthlessness and greed of the healthcare system under capitalism.

“It breaks our hearts to see what little value Tenet places on the lives of the patients under their care and the damage they are doing to our community by their willful negligence.” said Marlena Pellegrino, a 35 year registered nurse with St. Vincent and co-chair of the bargaining unit, in a press release. “Even while on strike, it is the real nurses of St. Vincent Hospital who were there for these vulnerable patients.”

St. Vincent nurses’ contract fight was a struggle for working class Bay Staters, with community members joining the nurses picket lines including members of the PSL, Massachusetts Jobs with Justice, Parents Union of Massachusetts, and Tenant and Housing Alliance of Worcester. The struggle of the St. Vincent nurses and the brutality of Tenet Healthcare even garnered widespread support from elected officials for the striking nurses. Supporters recognized the true multifaceted nature of this strike, as not only a workers’ issue, with nurses facing understaffing, unfair compensation, inadequate health insurance benefits, and workplace safety issues, but also a patients’ issue. Community members were not getting proper care during a global pandemic, while Tenet refused to cooperate with the striking nurses, who are the closest to the patients and know what conditions are needed to administer adequate care.

Through the intimidation and threats against their jobs, the striking nurses did not allow their consciousness and solidarity to be broken. They knew they deserved better and were able to shape their struggle into a victory, forcing Tenet to give them a contract that put patients first. The contract provides much needed staffing ratio improvements, including patient assignment limits depending on a nurse’s unit. For example, nurses in the cardiac post-surgical unit will have a maximum of four patients assigned, while nurses in outpatient oncology will have a limit of 0-2 patients assigned. In addition, striking nurses won protections from patient violence including “assault pay” for any nurse assaulted by a patient or visitor, 2% across the board pay increases over each year of the contract, and enhanced health insurance benefits for 24 hour+ part-time nurses, with Tenet covering 80% of premiums (up from 65%). The contract also guarantees that all striking nurses can return to their positions.

Pellegrino spoke from the heart about what this contract victory signifies: “This is an enormous victory for our patients and our members, and it is a testament to the grit and determination of every nurse who walked that line, day in and day out, through four seasons, 18 hours a day, in snow, pouring rain, through blazing heat and stifling humidity – all for the good of our community. As we conclude this struggle, our eyes are focused on the future, on returning to our home, to the hospital bedside to do what we love the most, which is to provide the high quality care our patients expect and deserve. Our strike was a stand for working people and essential workers all over the world. Our strike struck a chord, and for that and because of that we will walk into that building with our heads held high.”