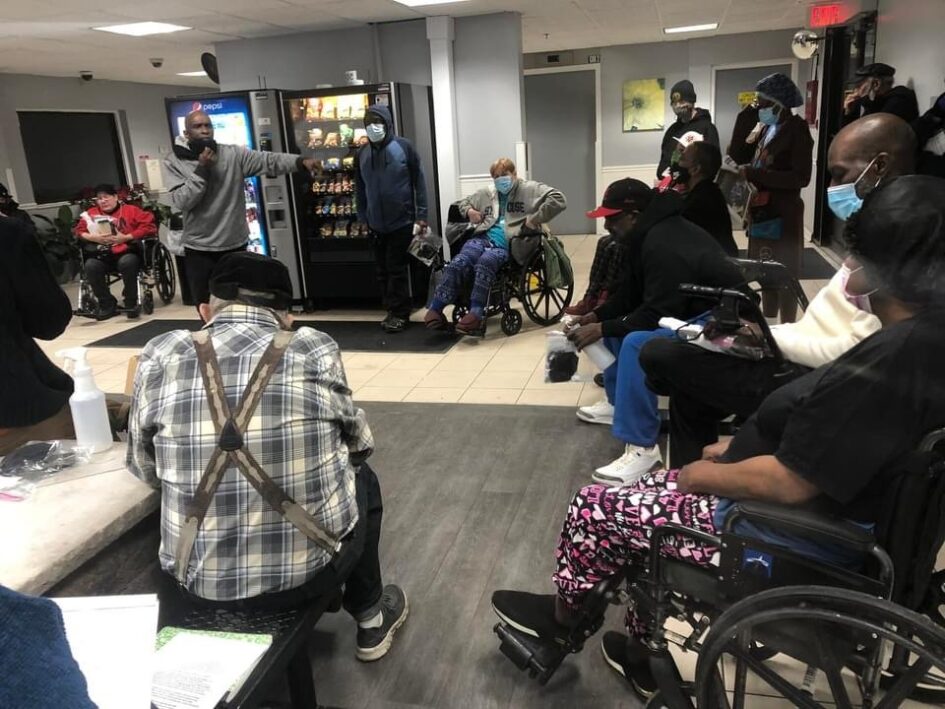 On the morning of February 2, the president of McCarthy Manor Tenant Association in Syracuse, NY, Tony Bibbs, addressed a crowd of tenants, members of the press, city officials, and members of the grassroots Syracuse Tenants Organizing for Power: “We, the tenants of McCarthy Manor, need to have decent living conditions,” he implored. “Right now, we have rats, we have mice, we have roaches; we have quite a bit going on in this building.”

McCarthy Manor is an apartment building that provides “affordable housing” to senior citizens and people with disabilities. The building has long been neglected by its owner – the multinational Related Management Corporation.

Fed up with their deplorable living conditions and a lack of response from building management, tenants at McCarthy Manor were determined to make their stories heard. At the February 2 press conference, tenants testified about pest infestations, rampant black mold, broken elevators, broken security doors and no heat during frigid winter months in central New York.

Martha, another member of the tenant association, told the crowd: “It was so cold in my apartment that I had to use a quilt, electric heater, another blanket, and I had the oven on broil to try to warm up.”

STOP! is a coalition formed in response to widespread housing struggles in Syracuse. Its founding members include the Party for Socialism and Liberation Syracuse, Syracuse Tenants’ Union, and Syracuse Democratic Socialists of America. STOP! worked with tenants at Ballantyne Garden Apartments, on the south side, to raise awareness of their struggle and pressure city officials to take action. STOP! has also supported the struggle at McCarthy Manor Apartments.

The housing crisis in Syracuse

Like many intensely segregated rust belt cities, Syracuse is marked by deep poverty and housing injustice. According to Census data released in 2019, one third of the city’s residents live below the poverty line, including 44 percent of children. Among Black people in Syracuse, approximately 41 percent live in poverty.

Most poverty in Syracuse is concentrated on its north and south sides, resulting from redlining practices and the construction of the interstate highway I-81 viaduct in 1951. City officials built I-81 through Syracuse’s 15th ward, a neighborhood that housed 90 percent of the Black population. Many families were displaced by the construction and moved to the city’s south side, which today is an area of intensely concentrated poverty and violence. Those who live especially close to I-81 face increased risk of asthma and other health conditions.

Poor residents of Syracuse face a high risk of lead poisoning from the chipping lead paint of the old, deteriorating housing stock. In fact, nine out of ten kids with elevated blood lead levels in Onondaga County live in Syracuse, with the rates of elevated levels in North and South Syracuse soaring to over 30 percent of all children, according to Census data.

As a whole, the housing crisis in Syracuse represents nothing short of a pattern of sustained violence carried out for profit by the banks and elites, against the city’s poor residents. While the city has taken some steps to intervene in this crisis, it has prioritized a disastrous and racist for-profit housing system above the health and safety of working people.

The tenants of McCarthy Manor are not alone in their struggle. The Skyline apartment building, previously owned by the beloved Syracuse University football star Tim Green, and now owned by his son, was declared “unfit for human occupancy” three times, including most recently in January 2022. Urine, trash and blood were found in common areas. That same month, a 31-year-old woman was shot in the elevator of the apartment building.

Ballantyne Garden Apartments, on the south side, has faced similar scrutiny for amassing 215 unresolved code violations. In this apartment complex, the landlord and property manager took especially cruel steps to demand unpaid rent during the eviction moratorium. In letters posted throughout the building, the property manager listed publicly the names of tenants behind on rent and the amount owed by each. She blamed tenants for the conditions in the building, accusing them of living “like pigs.” The city’s response to this negligence has included increased code enforcement inspections, some lawsuits, and calls for changes in ownership.

When Tony Bibbs contacted STOP! in November 2021, he had been negotiating on behalf of McCarthy Manor tenants on a range of housing issues. Bibbs reported that the building management was unresponsive on a range of serious living condition issues. In addition, he reported that management was pressuring tenants who receive federal housing assistance to sign a written agreement to a rent increase. When Bibbs refused to sign this increase, the building management called the police. Shortly after, Bibbs received an eviction notice as a result of this incident.

STOP! Coalition members worked with the McCarthy Manor Tenant Association to generate a list of 17 demands, which included the following five, among many others:

In December 2021, tenants and organizers sent several copies of the demands to the building management and its owner, Related Management Corporation. Management acknowledged receipt of the demands, but failed to make repairs, and instead retaliated against the Tenant Association.

The building’s community room, which had previously been open throughout the day and evening, was ordered closed by 3 p.m. “due to COVID-19”– meaning that the Tenant Association could no longer hold its regular 5 p.m. meetings in that space. Flyers advertising tenant meetings, and even a tenant holiday party, were ripped from the walls by management. The wheelchair-accessible bathrooms on the first floor were restricted to “staff only,” though staff already had designated bathrooms on the first floor.

In response to this retaliation, the Tenant Association and STOP! organized the Feb. 2 tenant speakout, inviting elected officials and media contacts to witness the testimonies. During the press conference, Tony Bibbs asked the Director of Codes Enforcement why the city had not stepped in sooner to address tenant concerns.

Immediately after the tenant speak-out, life at McCarthy Manor began to improve. Embarrassed by the negative press coverage, management directed maintenance workers to address the tenant demands that had been delivered two months prior. The city’s Codes Enforcement office reached out to Tony Bibbs to set up an “open house” for tenants to bring their concerns up directly.

“This is what happens when people come together, organize, and agitate for themselves and their neighbors,” remarked STOP! organizer Mary Traynor. “We are seeing the successes of building tenant power.”

Along with material gains, the organizing efforts at McCarthy Manor have galvanized tenants and many first-time activists to support the Tenant Association in becoming a fighting force against slumlords citywide.

“We want to be the first members of a citywide tenant movement,” Bibbs announced.

Dimitris Koutsoumbas: “Capitalist growth, by definition, is anti-popular in any management formula”

Unionized ski patrollers in Utah fight back against corporate greed