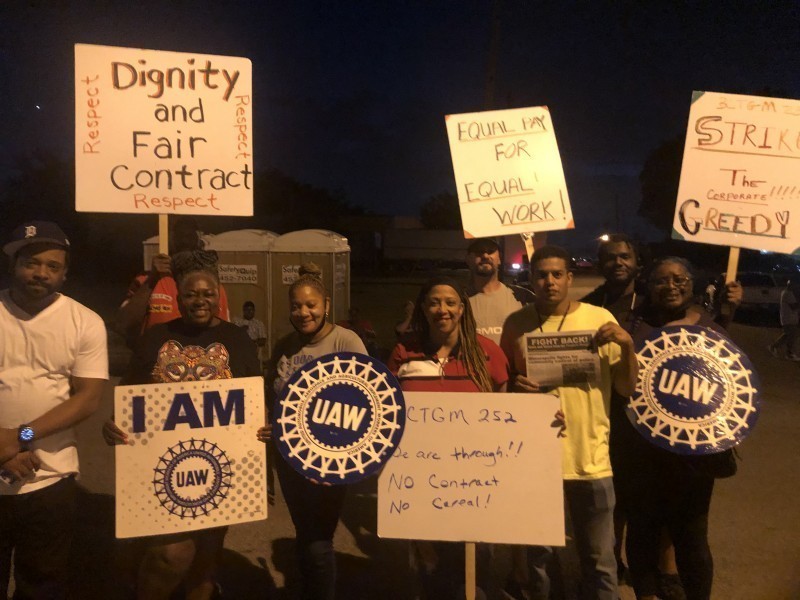 Memphis, TN – At midnight on Tuesday, October 5, workers at Kellogg’s factories across the United States went on strike. Union workers in Memphis say the company made an unacceptable offer at contract time.

Rob Eafan, a member of the local union’s leadership, said of the contract, “The company wants to have a permanent two-tier wage system, with reduced wages and benefits for our new employees. The bottom line: it’s all about corporate greed. The company made record profits throughout this pandemic while working us record hours,” he said. “And they had record bonuses of 158%.”

The Bakery, Confectionery, Tobacco Workers and Grain Millers Local 252G in Memphis has attracted huge support from the community. The union membership in Memphis is predominantly Black and Chicano. Hundreds of passersby honked their car horns in solidarity, bus drivers raised their fists when they passed by the striking workers, even politicians could not stay away from the picket line.

Shelby County Commissioner Reginald Milton, representing the heavily-Black and working-class neighborhoods of Orange Mound and South Memphis, showed up to stand on the picket line. “The reality is, the workers are the backbone of this country,” said Milton. “These are people who get up early in the morning and go to bed late at night, making sure all the things we need are delivered, made and produced for our family. These people deserve a fair wage.”

The Kellogg’s strike is a part of a wave of labor unrest, coming after strikes by workers at Nabisco and Frito-Lay earlier this year. The George Floyd uprising of 2020 has inspired an unprecedented wave of militant actions in the labor movement, the movements of oppressed nationalities, the movement for women’s rights, the right to vote, and many other people’s movements. The labor movement is rising – and class struggle is being waged on the shop floor.