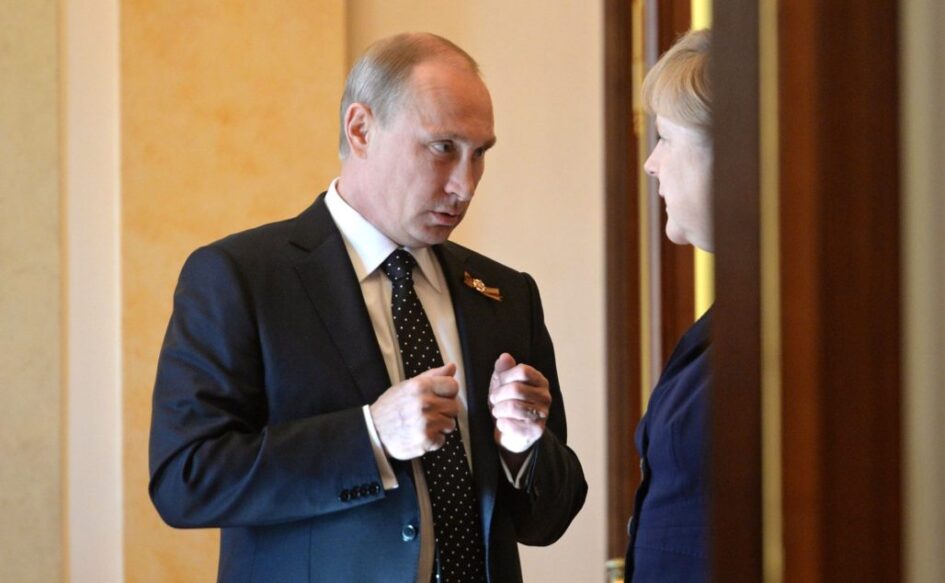 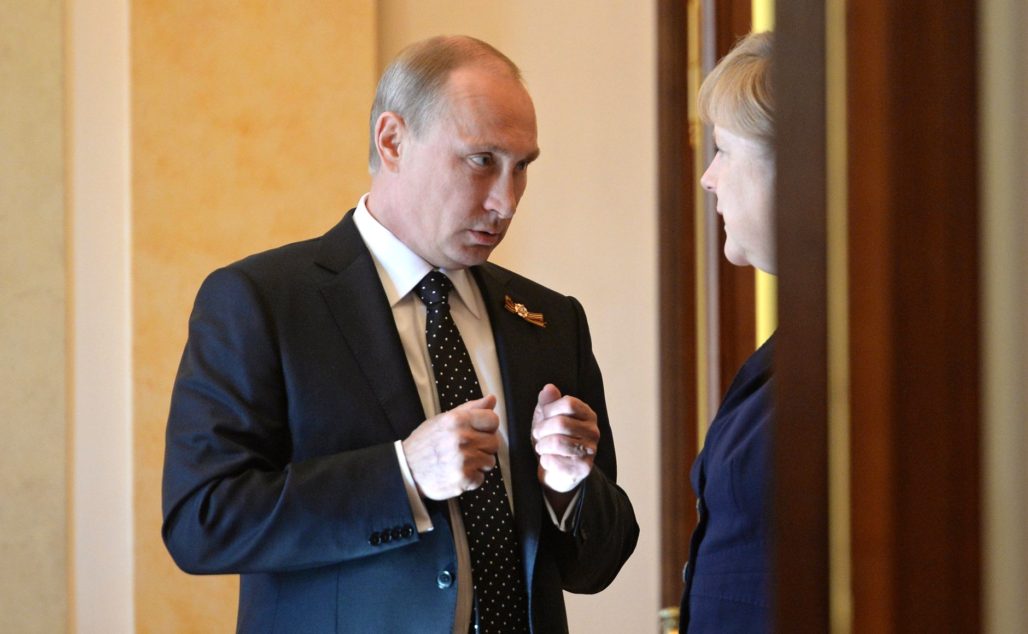 Above Photo: Russian President Vladimir Putin with then German Chancellor Angela Merkel on May 10, 2015, at the Kremlin. (Russian Government)

War, it seems, was the only option Russia’s opponents had ever considered.

Recent comments by former German Chancellor Angela Merkel shed light on the duplicitous game played by Germany, France, Ukraine and the United States in the lead-up to the Russian invasion of Ukraine in February.

While the so-called “collective west” (the U.S., NATO, the E.U. and the G7) continue to claim that Russia’s invasion of Ukraine was an act of “unprovoked aggression,” the reality is far different: Russia had been duped into believing there was a diplomatic solution to the violence that had broken out in the Donbass region of eastern Ukraine in the aftermath of the 2014 U.S.-backed Maidan coup in Kiev.

Instead, Ukraine and its Western partners were simply buying time until NATO could build a Ukrainian military capable of capturing the Donbass in its entirety, as well as evicting Russia from Crimea.

In an interview last week with Der Spiegel, Merkel alluded to the 1938 Munich compromise. She compared the choices former British Prime Minister Neville Chamberlain had to make regarding Nazi Germany with her decision to oppose Ukrainian membership in NATO, when the issue was raised at the 2008 NATO summit in Bucharest.

By holding off on NATO membership, and later by pushing for the Minsk accords, Merkel believed she was buying Ukraine time so that it could better resist a Russian attack, just as Chamberlain believed he was buying the U.K. and France time to gather their strength against Hitler’s Germany

The takeaway from this retrospection is astounding. Forget, for a moment, the fact that Merkel was comparing the threat posed by Hitler’s Nazi regime to that of Vladimir Putin’s Russia, and focus instead in on the fact that Merkel knew that inviting Ukraine into NATO would trigger a Russian military response.

Rather than reject this possibility altogether, Merkel instead pursued a policy designed to make Ukraine capable of withstanding such an attack.

War, it seems, was the only option Russia’s opponents had ever considered.

Putin: Minsk Was a Mistake

Merkel’s comments parallel those made in June by former Ukrainian President Petro Poroshenko to several western media outlets. “Our goal,” Poroshenko declared, “was to, first, stop the threat, or at least to delay the war — to secure eight years to restore economic growth and create powerful armed forces.” Poroshenko made it clear that Ukraine had not come to the negotiating table on the Minsk Accords in good faith.

This is a realization that Putin has come to as well. In a recent meeting with Russian wives and mothers of Russian troops fighting in Ukraine, including a few widows of fallen soldiers, Putin acknowledged that it was a mistake to agree to the Minsk accords, and that the Donbass problem should have been resolved by force of arms at that time, especially given the mandate he had been handed by the Russian Duma regarding authorization to use Russian military forces in “Ukraine,” not just Crimea.

Putin’s belated realization should send shivers down the spine of all those in the West who operate on the misconception that there can now somehow be a negotiated settlement to the Russian-Ukrainian conflict.

None of Russia’s diplomatic interlocutors have demonstrated a modicum of integrity when it comes to demonstrating any genuine commitment to a peaceful resolution to the ethnic violence which emanated from the bloody events of the Maidan in February 2014, which overthrew an OSCE-certified, democratically-elected Ukrainian president.

When Russian speakers in Donbass resisted the coup and defended that democratic election, they declared independence from Ukraine. The response from the Kiev coup regime was to launch an eight-year vicious military attack against them that killed thousands of civilians. Putin waited eight years to recognize their independence and then launched a full-scale invasion of Donbass in February.

He had previously waited on the hope that the Minsk Accords, guaranteed by Germany and France and endorsed unanimously by the U.N. Security Council (including by the U.S.), would resolve the crisis by giving Donbass autonomy while remaining part of Ukraine. But Kiev never implemented the accords and were not sufficiently pressured to do so by the West.

The detachment shown by the West, as every pillar of perceived legitimacy crumbled — from the OSCE observers (some of whom, according to Russia, were providing targeting intelligence about Russian separatist forces to the Ukrainian military); to the Normandy Format pairing of Germany and France, which was supposed to ensure that the Minsk Accords would be implemented; to the United States, whose self-proclaimed “defensive” military assistance to Ukraine from 2015 to 2022 was little more than a wolf in sheep’s clothing — all underscored the harsh reality that there never was going to be a peaceful settlement of the issues underpinning the Russian-Ukrainian conflict.

And there never will be.

Sow the wind, reap the whirlwind.

On reflection, Merkel was not wrong in citing Munch 1938 as an antecedent to the situation in Ukraine today. The only difference is this wasn’t a case of noble Germans seeking to hold off the brutal Russians, but rather duplicitous Germans (and other Westerners) seeking to deceive gullible Russians.

This will not end well for either Germany, Ukraine, or any of those who shrouded themselves with the cloak of diplomacy, all the while hiding from view the sword they held behind their backs.