Midwives’ protests can give birth to more resistance in NHS 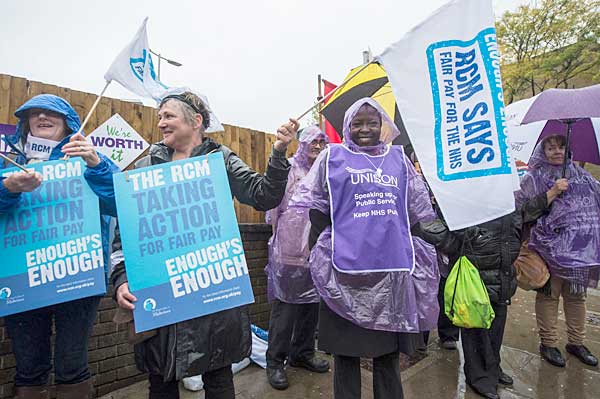 Midwives, alongside other health workers, strike over pay in 2014 (Pic: Guy Smallman)

This Sunday’s March with Midwives day of action is going to be big.

Already there are at least 75 local protests planned, stretching from Aberdeen in Scotland’s north east to Truro on England’s south west coast.

She told Socialist Worker that the mood for action had “really taken off”.

“This is the most galvanised I’ve ever seen midwives,” she said. “Lots of people have contacted me to say they are coming, and that’s because maternity services are in dire straits.

“The experiences that midwives are sharing are so upsetting and worrying.

“Maternity wards are now so short of qualified staff that it becomes impossible to do your job.

“A midwife from community told me that her area is supposed to have 30 fully qualified midwives but now runs with only six.”

Sarah is especially concerned about student midwives trying to learn vital skills with inadequate supervision—and says the removal of the student bursary was “criminal”.

“I’m also worried that new midwives are receiving no recognition of their value to society.

“Every day workers in maternity are reading reports of how unsafe particular NHS trusts are—and most midwives say to themselves, ‘That picture could be of my ward.’

“People are terrified that one day a mother and baby are going to come to harm on their ward, on their shift.”

Women waiting to have their labour induced are at particular risk, says Sarah.

“There are cases of women told that they need to be induced but waiting for days because there isn’t space on the ward,” she said.

“Another problem is the lack of support for women having difficulty breast feeding.”

Sarah says the demonstrations on Sunday are vital for everyone who cares about the NHS because the “level of desperation” among midwives is “huge”.

“We’ve got to force this government to take notice. Protests are a way of doing that.”