Mike Taber (ed) – Under the Socialist Banner: Resolutions of the Second International, 1889-1912 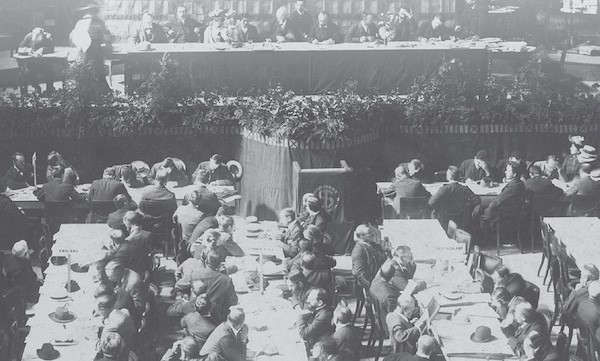 Mike Taber has edited for the first time the resolutions adopted between 1889 and 1912 by the nine congresses celebrated by the Socialist International, which is also known as the Second International. This scholarly edition involved a considerable work of translation: the official proceedings of the congresses were published in German (all nine) and French (six of them), and only one congress had its proceedings published in English (the London Congress of 1896). 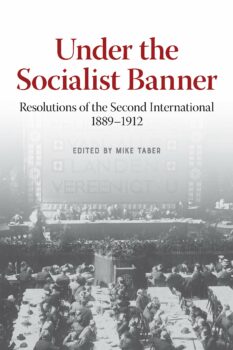 Mike Taber (ed)
Under the Socialist Banner: Resolutions of the Second International, 1889-1912

Besides providing English versions of all the resolutions in chronological order, the editor has accompanied them with an exceedingly useful critical apparatus. Taber’s Introduction provides an overview of the general characteristics and development tendencies of the Second International, its accomplishments and strengths as well as its weaknesses and contradictions, and finally its legacy and contemporary relevance. The critical apparatus also includes shorter introductions to each one of the nine congresses, expounding key debates within each congress, together with an Afterword on the collapse of the Second International in 1914 and an Appendix on several unapproved resolutions.

It is hard, from the perspective of the sects that pullulate in the left today under the pretentious name of ‘vanguard parties’, to understand what the Second International was, namely a mass socialist party of the working class: Camille Huysmans, the International Socialist Bureau’s secretary, estimated that in the years before 1914 the Second International counted ten to twelve million members affiliated to its national sections, with over fifty million sympathizers and voters (5).

The betrayal of internationalism by most of its leaders at the outbreak of the First World War in 1914 has given rise to an uninformed ex post facto view of the Second International as an opportunist organization, which ignores the fact that Friedrich Engels was heavily involved in the organization of its first congress held in Paris in 1889. Furthermore, Engels considered the 1891 Brussels Congress ‘a brilliant success for us’, adding that ‘in matters of principle as of tactics the Marxists have been victorious all along the line’ (29). He also gave the closing address at the 1893 Zurich congress. When Lenin wrote in 1918 his brochure The Proletarian Revolution and the Renegade Kautsky (1975) he meant exactly that; namely that Kautsky had renegaded the revolutionary pledges made not only in the programme of the Social Democratic Party of Germany (SPD) but also in the resolutions of the Second International, some of which Lenin himself had helped to draft.

It is true that, ‘Even though the Second International’s reach extended to many countries, it was still predominantly a European and North American movement’ (5). However, the vast majority of salaried workers at the time were concentrated in Europe and America, so this weakness of geographic focus was a reflection of identifying the working class with industrial labor.

The Second International’s founding Congress laid out the revolutionary goal of the new organization, affirming ‘that the emancipation of labor and humanity cannot occur without the international action of the proletariat–organized in class-based parties–which seizes political power through the expropriation of the capitalist class and the social appropriation of the means of production’ (22).

Of the resolutions adopted by this first Congress in 1889, it is perhaps the one regarding the May Day that is most memorable. In December 1888, the American Federation of Labor (AFL) had voted to organize actions throughout the United States for the eight-hour work day on May 1, 1890, in commemoration of the 1886 Haymarket massacre in Chicago. The founding Congress endorsed the AFL’s initiative and accordingly resolved that ‘a great international demonstration shall be organized in such a manner that on a fixed day the workers in all countries and in all cities shall simultaneously present to the public powers the demand that the duration of the working day be set at eight hours’ (25).

The Paris Congress of 1889 also adopted a resolution demanding the abolition of standing armies and their replacement by the general arming of the population (militia). While this demand was incorporated into the programs of the socialist parties of all the countries belonging to the Socialist International, it has been dropped by contemporary left organizations, which appear to be quite content letting ‘professional’ (i.e., mercenary) armies monopolize the knowledge of the use of weapons, as long as their middle-class constituencies are not bothered by conscription.

After the split between the centre and left wings of the SPD in 1910, the left wing of the party, led by Rosa Luxemburg, replaced the language of a  ‘standing army’, and assumed the language of  an ‘armed people’. Such a slogan stood in opposition to Kautsky’s proposals for disarmament and international arbitration courts, not only because a permanent citizens’ militia would be a much more effective instrument for preserving peace, but also because it could become a most useful tool for carrying out a socialist revolution.

The Socialist International made ‘political and economic action’ a precondition for its member organizations. This meant the exclusion of both the anarchists who opposed to the organization of the working class in its own political party and to participation in elections and protective legislation for the workers, as well as those organizations that rejected the need to organize trade unions (41-43).  While Proudhonist opponents of the trade unions had become a rarity by then, anarchists were a force to be reckoned with, and they attempted to disrupt the first four congresses of the Second International.

The Stuttgart Congress of 1907 specified that the organizations admitted to the international socialist congresses were not just political parties adhering to the essential principles of socialism (‘socialization of the means of production and exchange; international union and actions of the workers; conquest of public powers by the proletarians, organized as a class-party’), but also include the trade unions that accepted ‘the principles of class struggle’ and recognized ‘the necessity of political action (legislative and parliamentary)’, yet not participating ‘directly in the political movement’ (99).

Consequently, a great number of resolutions was aimed at achieving the democratic rights that the workers needed to organize their own political party and take part in the political process, such as the right of association, universal suffrage, etc. This was particularly true of a section of the working class that was denied those rights worldwide, namely working women. In this context, the Brussels Congress of 1891 adopted a resolution on ‘Women’s Equality’, which demanded ‘that women be granted the same political and civil rights as men’) (34).

This 1891 Congress was further supported during the Zurich Congress of 1893, which adopted a resolution on ‘Protective Legislation for Working Women’, demanding measures like the legal prohibition of women working two weeks before, and four weeks after, childbirth, and the appointment of women inspectors for all trades and industries in which women are employed. These were carried out on the ground that ‘the bourgeois women’s rights movement rejects all special legislation on behalf of working women as an attack upon the freedom of women and upon her equal rights as opposed to men’ (44).

In this regard, the most important resolution adopted by the 1907 Stuttgart Congress was the resolution on Women’s Suffrage, which greeted the First International Socialist Women’s Conference. This was held on the eve of the congress under the leadership of Clara Zetkin who established the Socialist Women’s International and expressed ‘its entire solidarity’ with the demand for universal women’s suffrage put forward by it (111).

The second congress of the Socialist Women’s International, held in Copenhagen in 1910, established what would become known as International Women’s Day. In its resolution, the Congress specified that working women, with the support of the socialist parties, should organize demonstrations and assemblies worldwide at a stipulated date in order to achieve universal female suffrage. From 1913 on, those demonstrations were held on March 8, and their celebration in Russia in 1917 gave birth to the February Revolution in Russia (March 812 [Feb. 24–28, old style], 1917).

Another important resolution of the Second International was the one on ‘Militarism and International Conflicts’ adopted by the Stuttgart Congress in 1907. The original draft was prepared by August Bebel and incorporated a series of amendments presented jointly by Rosa Luxemburg, V. I. Lenin, and Julius Martov. The two concluding paragraphs called on socialists worldwide ‘to do all they can to prevent the outbreak of war’, while emphasizing that ‘In case war should break out notwithstanding, they shall be bound to intervene for its speedy termination, and to employ all their forces to utilize the economic and political crisis created by the war in order to rouse the masses of the people and thereby hasten the downfall of capitalist class rule’ (105).Those paragraphs were later reproduced in the resolution on ‘War and Militarism’ adopted by the Copenhagen Congress in 1910 as well as in the ‘Basel Manifesto on War and Militarism’ adopted in November 1912 after the outbreak of the First Balkan War, which also urged ‘the workers of all countries to oppose the power of capitalist imperialism through international working-class solidarity’ (141). Lenin later included the Basel Manifesto as a supplement to the French and German editions of his work, Imperialism, the Highest Stage of Capitalism, as ‘a monument exposing to the full the shameful bankruptcy and treachery of the heroes of the Second International’ (1993: 11).

There is much more fascinating material included in this book that we cannot go into in the framework of this review, such as the Dresden-Amsterdam Resolution ‘On Tactics’, prompted by Alexandre Millerand’s ‘ministerialism’ (a policy that under Stalin received the name of ‘Popular Front’), which condemned ‘most energetically the revisionist attempts, in the direction of changing our tried and victorious tactics based on the class struggle, and of replacing the conquest of the public powers through the supreme struggle with the bourgeoisie by a policy of concession to the established order’ (83). The consequence of such revisionist tactics would have been to turn the national sections of the International ‘from a party strictly revolutionary in the best sense of the word–into a party contenting itself with the reform of bourgeois society’ (83).

The same goes for other major debates such as those in the Stuttgart Congress of 1907 on colonial and immigration policies. The Dutch delegate, Hendrick Van Kol, proposed a policy of ‘socialist colonialism’, which was rejected in favour of a wholesale repudiation of colonialism. The American delegate, Morris Hillquit, supported restrictions on Chinese and Japanese immigration, which were repudiated in support of the unrestricted right of immigration for all nationalities and races.

Hopefully other scholars will be inspired by Taber’s work to translate the proceedings of the congresses of the Socialist International, as John Riddell did with the proceedings of the first four congresses of the Communist International. In the meantime, this collection and its exceedingly useful critical apparatus will serve as an introductory guide to this vital chapter in the history of socialism.

Daniel Gaido is a researcher at the National Research Council (CONICET), Argentina. He is author of The Formative Period of American Capitalism (Routledge, 2006) and co-editor, with Richard Day, of Witnesses to Permanent Revolution (Brill, 2009), Discovering Imperialism (Brill, 2009) and Responses to Marx’s ‘Capital’ (Brill, 2017).

Under the Socialist Banner: Resolutions of the Second International 1889-1912 – book review