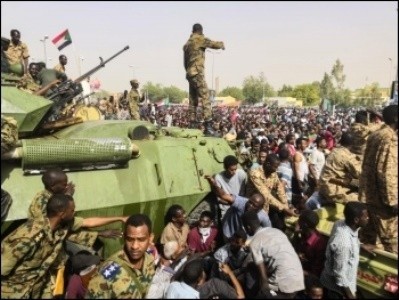 A military coup is taking place in Sudan. The army has arrested civilian ministers and their advisors. However, tens of thousands of protesters have taken to the streets in defiance with chants of: “The people are stronger, stronger!” and “Retreat is not an option!”

Workers at the central bank have gone on strike and a general strike has been called. Ominously, the army has fired on the crowds with reports of at least ten people shot dead and many more injured.

The coup plotters have seemingly ignored pressure from the Biden administration and EU countries to stick to the previously agreed ‘transition to democracy’, which followed the country’s 2019 revolution.

The military tried to carry through a coup last month but the masses came onto the streets and pushed it back. However, the military chiefs have, over recent months, been stirring up national tensions and causing a blockade of Port Sudan, stopping vital supplies of food, medicine, and fuel from getting through.

The usual tactics of a military takeover have happened: namely, the imprisonment of the civilian leaders of the transitional government (Sovereignty Council), the removal of state governors, shutting down the airport, internet, taking over the state broadcaster, calling a state of emergency’, as well as calling for elections, under the slogan of “freedom, justice, and peace”.

The statement of general Abdel Fattah al-Burhan, head of the Sovereignty Council, saying the military will speed up the process to elections and abide by a draft constitution is utterly disingenuous. Even if they do hold elections, they would only accept a puppet government of the military, at best. They may, however, go for quicker elections, ensuring pro-military parties from the old guard form a government and hoping new forces do not emerge.

Prior to the current coup, there was a joint military-civilian government known as the Sovereignty Council. This uneasy and unstable coalition of forces emerged following the country’s 2019 revolution which overthrew the 30-year-old dictatorship of president Omar al-Bashir.

No trust in pro-capitalist transitional government

But as the Committee for a Workers’ International warned at the time, the workers and urban and rural poor cannot place any trust in the pro-capitalist transitional government, which effectively left the capitalist state in the hands of the military old guard (see ‘Sudan the revolution under threat’ at socialist party.org.uk).

Furthermore, we argued that, as proved to be the case, the military would simply bide its time, sabotage the economy and government administration, and then, against this chaotic backdrop, organise a coup d’état.

The civilian component of the government – organised under the banner of Forces of Freedom and Change (FFC) alliance – simply acted as a fig leaf for the military power. And while the Sovereignty Council did carry out some social reforms, it acted primarily in the interests of capitalism. This included implementing the diktats of the International Monetary Fund to cut food and fuel subsidies.

Inevitably, these counter-reforms caused the prices of bread and fuel to rise and poverty to increase, further disillusioning the masses. This stalling of the revolution also produced splits within the FFC.

Taking advantage of the growing chaos the military, spearheaded by Mohamed Hamdan ‘Hemeti’ Dagolo, the right-hand man to former president al-Bashir and responsible for widespread atrocities against civilians in the Darfur region, called for pro-military demonstrations against the Sovereignty Council in the days prior to the coup.

Why has the military done this? Firstly it is utterly opposed to any curbing of its power and privileges. It has a history of carrying out bloody coups. It was also responsible for horrendous atrocities against activists in its attempt to crush the 2019 revolution and, before then, committing genocide in Darfur.

In addition, it is notoriously corrupt. The top brass has its fingers in the gold industry, financial sector, and elsewhere. It does not want that flow of money into its bank accounts to dry up.

The Neighbourhood Resistance Committees which emerged during the 2019 revolution should not only organise the armed defence of districts where workers and the poor live and work but also attempt to split the ranks of the army away from the military chiefs to defeat the coup.

What is also urgently required is the construction of an independent, revolutionary workers’ party, with a programme for a revolutionary constituent assembly of the working class and poor people. Such an assembly could then form a government which, in order to achieve security and an economy run in the interests of the majority, would need to take socialist measures such as nationalisation of the key companies.

Above all, to take the revolution forward means overthrowing capitalism and, as history amply shows, that requires the building of a mass revolutionary socialist party.

The CWI relies on the donations from working class people around the world to fund our campaigns.Please donate towards building the CWI.