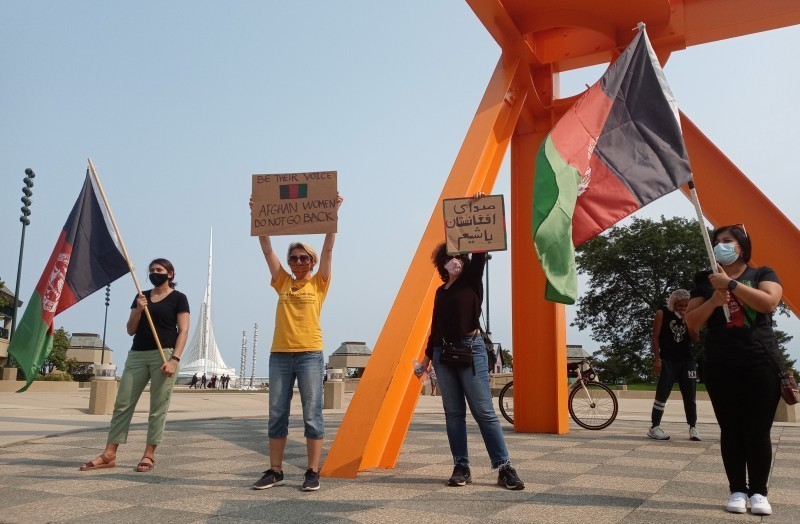 Milwaukee rally against U.S. interference in Afghanistan.
(Fight Back! News/staff)

Milwaukee, WI – A group of anti-war students and community members gathered in downtown Milwaukee in the early afternoon of September 11 to protest continued U.S. involvement in Afghanistan. Speakers acknowledged the significance of the withdrawal of U.S. troops, but pointed to history and actions taken since the evacuation of the U.S. embassy as a sign of things to come.

“It’s a good thing that the U.S. has removed its forces, but we know that they’re not going to allow the unimpeded expression of Afghan self-determination,” said Ryan Hamann, speaking on behalf of Freedom Road Socialist Organization – Wisconsin.

“We see this in the drone strikes ordered by Biden which resulted in the deaths of ten civilians, seven of whom were children. We should expect to see sanctions against ‘the government’ in the near future,” Hamann continued. “Sanctions kill people, too, and the U.S. government knows this. It’s all a part of their plan to continue the war on Afghanistan.”

Attendees chanted, “Hands off Afghanistan!” and “No justice, no peace, U.S. out of the Middle East!” as cars drove by honking their approval for the anti-war demonstration. Downtown Milwaukee was alive with foot traffic due to SummerFest, a major annual music festival. A few people stopped to join or ask questions.

After the event, people were asked to purchase a book detailing the lives of women in Afghanistan. The proceeds raised would be donated to the Afghan refugee resettlement efforts in Fort McCoy, Wisconsin, an area that falls roughly halfway between Madison and the Minnesota state line. The event was organized by the FRSO – Wisconsin and the Milwaukee branch of the Party for Socialism and Liberation together with a handful of Iranian graduate students.

FRSO – Wisconsin is hosting a study on imperialism and national liberation, with the current events in Afghanistan serving as a backdrop for discussions. This study is open to all who want to learn more about these topics. It’s set to take place via Zoom on September 19 at 5 p.m. Central Time. The link for the Zoom call can be found on the FRSO – Wisconsin Facebook page.