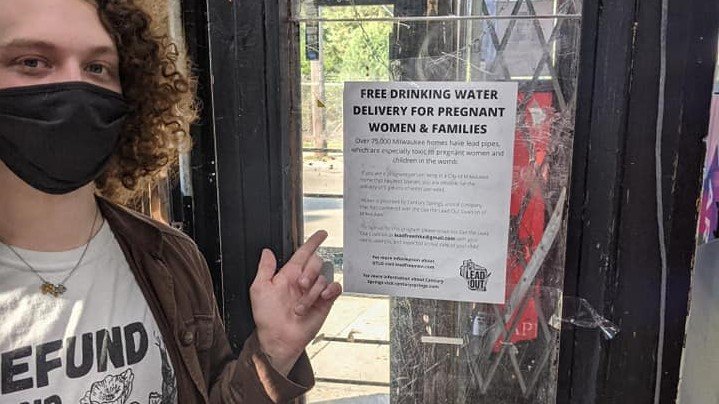 Milwaukee’s Get the Lead Out Coalition has launched its Clean Water for Pregnant People program. For 12 months they will deliver eight cases of water per month free of charge to pregnant women living in homes with lead laterals. The water is provided by Century Springs, a local company with whom the coalition has partnered. Comrades in Party for Socialism and Liberation — Milwaukee have been putting up posters in Milwaukee neighborhoods to help publicize the campaign

Thomas Welcenbach of GTLO explained how and why the program was started.

In 2018, I attended a meeting where the impact of lead in drinking water on infant deaths was discussed. Many people in the meeting were dismissive of the issue, so I started to examine the 2012-16 Infant Death Map that was handed out in the meeting. I investigated the red line on the map along West North Avenue. I mapped all the properties along West North Avenue and argued that city-owned properties there had partial lead service line replacements conducted that eventually caused the infants to die in that location. I presented my findings at numerous meetings, including to the Public Health and Safety Committee. Lead in drinking water spikes and can cause infant mortality. Lead in drinking water spikes when the city removes their portion of the line from the water main to the curb and reconnects a new copper line on their side to the old lead pipe on the private homeowner’s side. The city created the Birthing Moms Pilot Program to address concerns of lead in the water but they failed to properly provide safety measures for pregnant people. In March of this year, a representative from Century Springs reached out and asked how they could help address the issue of lead in drinking water, so we created the sign-up form together.

Any kind of lead exposure is a risk, particularly for children and senior citizens, as coalition member Bobby Penner explains. “For children, lead exposure can stunt their development and impair their neurological functions. It can also damage bone and nervous system development. There are many sources of lead poisoning including water, paint, soil and cookware. However, in cases of prenatal development, the main concern is lead-contaminated water. If a pregnant person consumes the water, it can result in premature birth and stillbirth,” Penner said.

Approximately 75,000 Milwaukee homes have lead laterals connected to the water mains, some of which date as far back as the 1870s. The city has been removing less than a thousand a year, which is a snail’s pace that will render many Milwaukee residents affected for generations. That is unacceptable.

Welcenbach said, “Partial lead service lines must be stopped. They have been a major source of lead poisoning in our city. Full lead service line replacements need to be mandated and the city must pay for them. They must stop reusing the old lead pipe infrastructure when they build new houses on vacant lots. When an individual buys that lot, the city charges an excavation fee to reconnect the old lead service line that was left in the ground from when the previous house was there. The city has been doctoring their maps to make lead poisoning disappear from Milwaukee’s East Side, Bay View and West Side through buffer analysis from different locations along West North Avenue. I recently presented my research findings to the EPA and outlined key measures that must be taken.”

Penner added, “There needs to be increased funding for lead paint abatement and lead soil abatement programs as well. Lead hazards are talked about a lot but there’s very little action at the city level or from local organizations aside from the Get The Lead Out Coalition.”

People can sign up for the Clean Water for Pregnant People program here. Only those who are are pregnant and live in homes that have lead service lines are eligible to participate. To find out if your home contains lead laterals, search the database here.