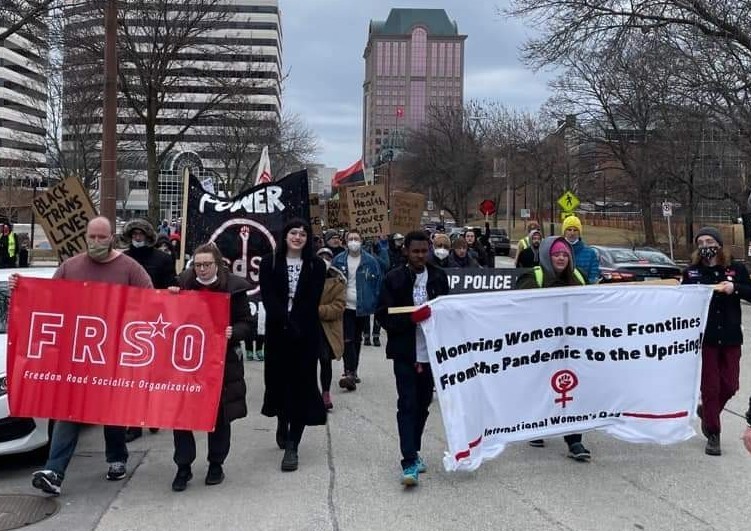 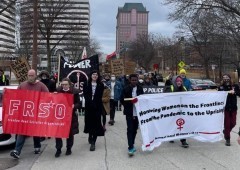 Milwaukee, WI – On the afternoon of March 6, over a dozen organizations joined together under the banner of the new Milwaukee International Women’s Day Coalition to host a march and rally in commemoration of the working-class holiday. A crowd of more than 50 people turned out to celebrate the occasion.

The Coalition united community, campus and labor organizations under one umbrella with a platform that included points about reproductive rights, trans women’s rights, compensation for domestic laborers, expanded union rights, paid parental leave, and community control of the police.

The action started at Dontre Hamilton (also known as Red Arrow) Park in downtown Milwaukee. The event leaders got things started with a chant of “When women’s rights are under attack, what do we do?” to which those in attendance responded, “Fight back!” The march was a short route that ended at the Milwaukee Federal Building.

Cara McFadden, an organizer with Students for a Democratic Society (SDS) at UW-Milwaukee, got things started with a speech that highlighted recent attacks against abortion rights and the right for trans women to exist, while acknowledging that the struggle is broader than that.

“It is not only the forces of reaction which we must contest, but also an unjust status quo,” McFadden said. “It is essential that we recognize that the individual is limited, especially in a system which seeks to impede them at every turn. Everyone has their strengths and weaknesses, their own perspectives and ideas. It’s only when we come together that change can be achieved. Together, the summation of our strengths mitigates our weaknesses.”

Later, Aurelia Ceja from the Milwaukee Alliance Against Racist and Political Repression, stated “There’s been proposals around the country to simply hire more women cops. ‘They won’t harass and harm people as much.’ Daunte Wright and many others would beg to differ with that sentiment. When police are harming us in our communities, throwing more police at the problem is the last thing that is going to help.”

She briefly discussed the concept of community control of the police through a civilian police accountability council as a cornerstone of the organizing that the Milwaukee Alliance does before providing a vision of safe communities.

Nadezdha Young-Binter, a rank-and-file trade unionist and member of the Freedom Road Socialist Organization (FRSO), capped the speakers with a speech that centered working women of all kinds. After a brief comment about the history of International Women’s Day, she left the crowd with a rousing call to action.

“There is a history here that we have to continue on this holiday. It was women demonstrating against war and poverty in Russia over 100 years ago that led to the October Revolution and the end of Czarist rule in that country,” Young-Binter said. “Here in this country that is falling deeper and deeper into endless war and poverty, we have to push forward – in factories and hospitals, in kitchens and offices, schools and shops, in our homes, and in these streets. We can’t stop until all of us are free!”

Other speakers included AFSCME Local 526 President Jaclyn Kelly, Christy Breihan of Peace Action of Wisconsin, Milwaukee-born Dr. Alexandra Skeeter, schooled at the Latin American School of Medicine in Cuba, and Taleavia Cole and Sarah Wunderlich, fighters for justice for their loved ones and others lost to killer police in Milwaukee and Green Bay.

The expectation is that this will not be just a one-off event for 2022, but instead the first in what will be an annual celebration organized and led by the Milwaukee International Women’s Day Coalition. The Coalition partners for the inaugural action included Freedom Road Socialist Organization, the Milwaukee Alliance Against Racist and Political Repression, the Wisconsin Coalition to Normalize Relations with Cuba, SDS, AFSCME Locals 526 & 1954, Planned Parenthood of Wisconsin, the Black Rose Initiative, Jewish Voice for Peace, ZAO MKE Church, Students for Justice in Palestine, Niñas Bravas, Leaders of Kenosha, MIDCOAST MKE, the Women’s Resource Center at UWM, and the Progressive Restaurants and Activists of Wisconsin Network.

Twin Cities takes to the streets for International Women’s Day