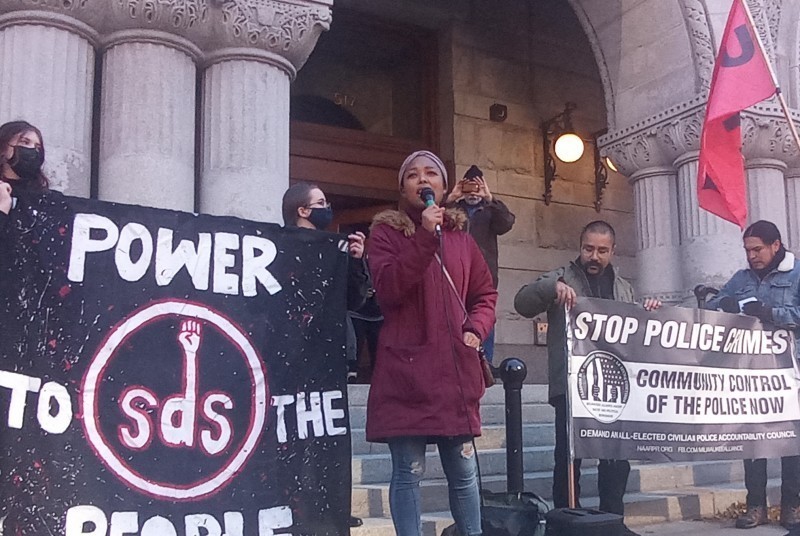 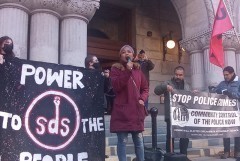 Milwaukee, WI – Just after noon on November 20, over 120 people gathered at Red Arrow Park downtown to condemn the “innocent on all charges” verdict in the trial of vigilante murderer Kyle Rittenhouse. The protest was called for and organized by the Milwaukee Alliance Against Racist & Political Repression, UW-Milwaukee Students for a Democratic Society, and the Wisconsin district of the Freedom Road Socialist Organization. All three groups had a presence on the ground in Kenosha last summer in the midst of the uprising.

The rally began at Red Arrow Park, but organizers quickly took the streets with the gathered crowd, with cars at the front and the rear to keep the marchers safe. They marched to the federal courthouse, chanting along the way, “Indict, convict, send Kyle Rittenhouse to jail!” and “Don’t arrest me, arrest the Nazi!”

Once the march reached the courthouse, speakers took center stage. The people in attendance heard from representatives of each of the organizations responsible for hosting the event as well as The People’s Revolution, whose membership turned out in support.

Adelana Akindes of UWM SDS spoke first, sharing her experiences protesting in Kenosha before and after Rittenhouse’s murder of Anthony Huber and JoJo Rosenbaum. On the night after Rittenhouse fled from Kenosha, Akindes was swept up by officers in unmarked vans. A successful nationwide fight was waged by National SDS, the Milwaukee Alliance, and their allies to free Akindes and the other people who were being held with her.

“They kept us there for almost two days, and they did it all because we were there for justice for Jacob Blake, justice for the victims of police crimes,” said Akindes. “It’s so infuriating because the day before, Kyle Rittenhouse was there and he murdered people, and he was able to go home. They didn’t target him like they did us.”

Akindes concluded with a call to action. “But there’s power in numbers. We have to organize. We have to imagine a world that benefits us and not the white supremacists, not the Kyle Rittenhouses. Get out there and keep fighting!”

The next to speak was Nadezdha Young Binter, a rank-and-file trade unionist and member of FRSO. After reading off a statement from the organization, she told the crowd, “This capitalist country and capitalism around the world has always been built on the hyper-exploitation of Black labor. You can’t fight capitalism without the participation of the people who are most oppressed by it; there is no end to capitalism without Black liberation.”

Mariah Smith of The People’s Revolution spoke next. TPR formed out of the spontaneous mass protests that erupted in Milwaukee in the summer of 2020 and went on marching every day for more than 200 days, and Smith was and is an integral part of their efforts.

“A 17-year-old can get driven across state lines – his mama don’t get charged with nothing; that’s child endangerment. But Black parents go to jail for using a different address so that their kids can go to a better school. There are Black mamas in jail because they wanted their kids to have a better opportunity, and this mama at home kicking her feet up because her son is at home,” said Smith.

Alan Chavoya, a leader with the Milwaukee Alliance, wrapped up the speakers stating, “You’ve got this people’s uprising in Kenosha over the police shooting of Jacob Blake. This kid sitting in his fucking house in Illinois thinks, ‘I gotta go over there and protect that property.’ Why is he thinking like that?”

Chavoya continued, “He’s thinking like that because when we were on the streets, they sent the National Guard, they sent the police, they sent everyone they could – the feds – to protect that property. That’s no coincidence. That’s how this system functions.”

After some last closing comments, the rally returned to the starting point at Red Arrow Park. Those in attendance were left with some words of wisdom from Justin Blake, the uncle of Jacob Blake, who said that this moment isn’t the end of something, but the beginning of it.

People were urged to continue the fight and to join an organization. As the chant goes, “The people, united, will never be defeated!”