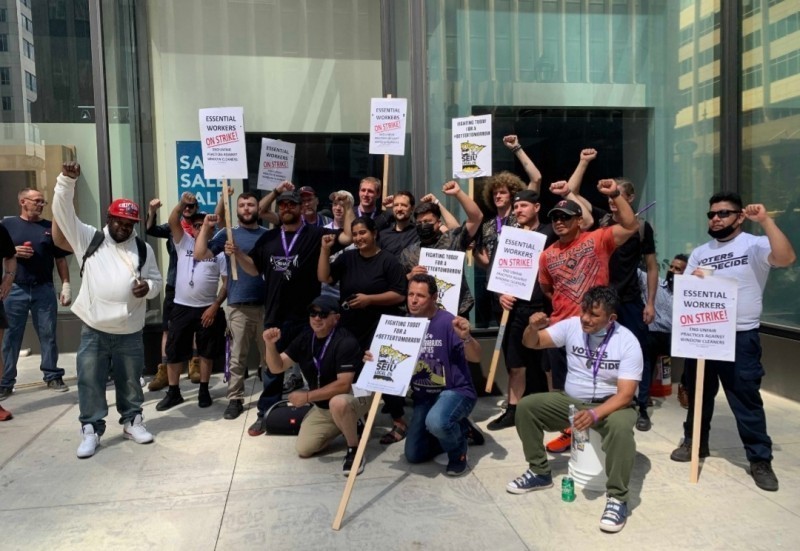 Minneapolis, MN – On August 17 at 7 a.m. around 50 high rise window cleaners represented by the Service Employees International Union (SEIU) Local 26 in Minneapolis began a strike. The window cleaners are part of a master contract in which three companies bargain together for one large contract.

Members are on strike at Columbia Building Services and Final Touch Commercial Services which are two of the three companies in negotiations. The third company, Apex North, has already agreed to the main principles in question and as a result the union members decided that workers at Apex North will continue washing windows during the strike with support from their coworkers at the other two companies.

SEIU represents around half of the total high rise window cleaners in the Twin Cities market and clean the vast majority of buildings over 20 stories in the area, which are the primary money makers in the industry. They use many types of equipment to clean the skyscrapers including portable hanging scaffolding known as swingstages, boom lifts over 100 feet tall, and by rappelling on boatswain chairs with rappelling racks and suction cups to swing around cleaning windows sometimes as much as 48 stories in the air on ropes and knots.

The window cleaners are essential workers, and they say they are prepared to stay out until the companies agree to a decent contract that reflects the dangerous and uniquely skilled work they do. The workers say that in addition to cleaning windows, many have been asked to clean inside offices where COVID-19 cases were reported. They also say that they received little training or equipment to clean offices in these hazard conditions. The union is demanding the right training an equipment to stay safe as well as pay that reflects the hazardous work.

These window cleaners have a history of fighting for better wages and safety. In 2010 they were locked out by the same companies after refusing to not follow safety regulations when hanging over the sides of skyscrapers and climbing ladders as tall as 40 feet. That lockout lasted five days before the window cleaners stages a civil disobedience where they tied themselves safely using window cleaning equipment to the outside of a fifth story handrail and refused to come down until window cleaners were safe. They were arrested but the companies called immediately after and ended the lock out and returned to the bargaining table where they agreed to the main demands of the strike including significant raises and safety language and funds.

Window cleaners are a small group but tend to be the kind of people who do not back down form a fight when they have committed, and a large majority voted for this strike. This is a developing story and Fight Back! will have more coverage soon on it.