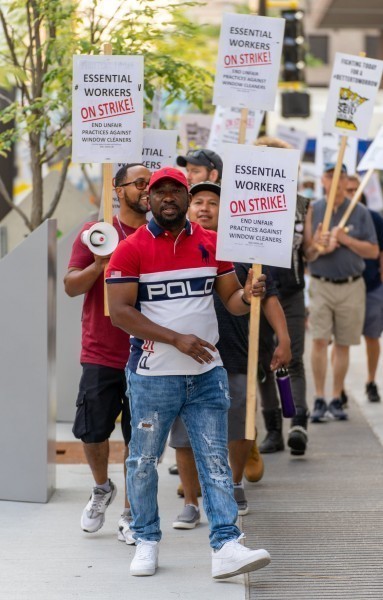 Minneapolis, MN – On Thursday, August 26, window cleaners in Minneapolis reached a tentative agreement with their employers and ended their open-ended strike after ten days on the picket lines.

The window cleaners – who are part of a master-contract that includes three companies (Columbia Building Services, Final Touch Commercial Cleaning and Apex North) – won major improvements in their new contract after holding strong on the picket lines and organizing several large rallies and actions in the Minneapolis area over the course of the strike.

In the new contract deal, some of the wins include 12% wage increases across the board over the duration of the contract, increased sick days, increased disability pay, and funding from the companies to be used to start a window cleaner apprenticeship safety and training program. Lack of proper training and safety was one of the major issues at the heart of the strike.

In a public statement released by SEIU Local 26, the window cleaners union, Eric Crone, a window cleaner and steward with the local, said, “After the last year, all essential workers deserve more. It’s important that all the workers who kept our state running during COVID fight for what we deserve. Our strike showed that no one will just give anything to us, but you have to stand up and fight for what you deserve. I hope our strike, and our strong new contract, show other essential workers that when you band together and stay the course, you can get results.”

The window cleaners will return to work on Monday.