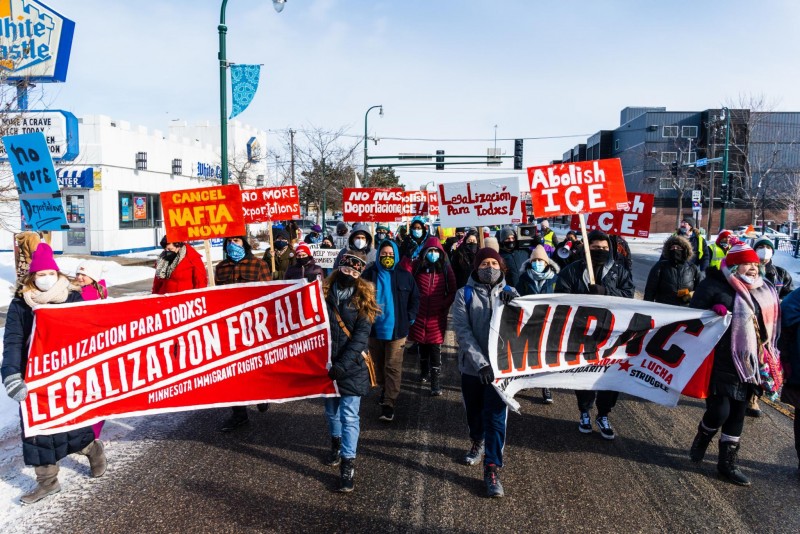 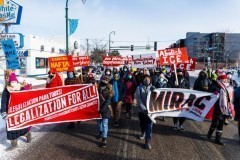 Immigrant rights protest turns up the heat on Biden Administration.
(Fight Back! News/Staff)

Minneapolis, MN – On January 23, protesters marched in freezing temperatures to bring attention to the Biden administration’s inhumane immigration policies. The march, organized by the Minnesota Immigrant Rights Action Committee (MIRAC), took place in a neighborhood with many immigrant families and received significant support from onlookers as protesters chanted about closing the camps, abolishing ICE, and supporting legalization for all. The protesters demanded that Biden and the Democratic-controlled Congress take immediate action to reverse all Trump-era anti-immigrant policies and act on their campaign promises to support immigrant families.

January 20 marked one year since Joe Biden became president, promising to reverse Trump’s numerous extreme anti-immigrant policies. However, many of those same policies that provoked righteous outrage under Trump remain in place under Biden. This continues a tradition of Democrats making grand promises to improve the material conditions of immigrant and working-class families during election years, but once in office they backtrack and instead continue to harm those communities.

“It’s time to hold leaders accountable for their actions and promises. Immigrants and families in this country are beyond disappointed in the false promises of President Biden and his administration. Biden and the Democrats need to follow through on the promises they’ve made for decades to treat immigrants humanely and allow for legalization for all. This is not a game. Lack of action impacts the daily lives of immigrant families nationwide. We must look after each other and remember that the fight isn’t over,” said Sarah Silva, an organizer with MIRAC.

The Biden administration has continued inhumane treatment of migrants. They have continued mass deportations – nearly 1.9 million people were deported during his first year. They’ve expanded detention – over 22,000 immigrants are being detained in facilities throughout the U.S., a more than 50% increase from when Biden took office. Further, over 1000 children continue to be separated from their families. Biden has also continued construction on the southern border wall and has renewed the Trump administration’s “Remain in Mexico” policy, continuing the U.S.’s approach to those seeking asylum.

Another organizer with MIRAC, Diana Hernandez said, “Biden is not our savior. Nor is he our friend. He is a privileged player. He is also a man who is too afraid to lose the power he has gained and will not risk it to help those who voted for him based on a platform he has shown no signs of seeing through. We witness it not just with immigration but with voting rights, indigenous rights, police accountability and climate justice. Trump may not be president. But until Biden acts any differently, we cannot believe nor act as if things will get better for us all.”

It’s clear that Biden and Congress are failing immigrant communities. It is imperative that the struggle for immigrant rights continue, and that affected communities put increased pressure on those in power by taking to the streets.

After a Year of Biden, Why Do We Still Have Trump’s Foreign Policy?

How ruling class greed, not immigration, brought down the Roman empire