Minneapolis rallies on the anniversary of the Iraq invasion to say no to U.S. wars 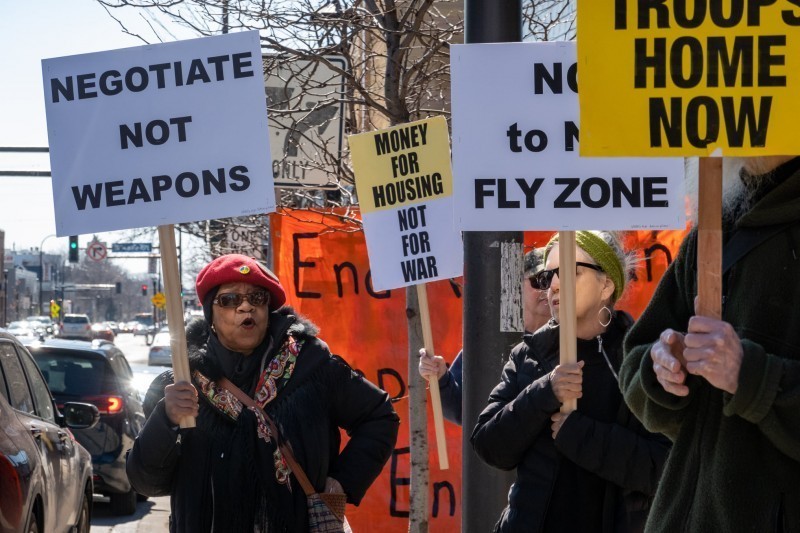 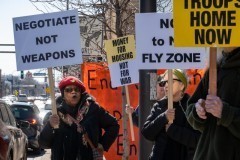 On March 19, more than 80 demonstrators gathered outside Walker Library in Minneapolis’ Uptown neighborhood to protest ongoing U.S. military interventions abroad, from U.S. troops deployed in Syria to the continued funding and arming of troops in Ukraine. The protest was organized by the Minnesota Peace Action Coalition.

March 19 marked the 19th anniversary of the U.S. invasion of Iraq; however organizers made it clear that the event was not only to remember that criminal imperialist war, but to condemn the many wars that the is currently involved in. The U.S. has troops deployed in Syria, funds the Saudi war on Yemen and runs drone operations there, has recently carried out airstrikes in Somalia, and is continuing to escalate the war in Ukraine. Protesters carried signs with slogans like “Fight COVID, not Russia!” “Money for schools! Not for war!” and “No new wars for the 1%!”

Ana Vasquez spoke as a member of the Minneapolis Federation of Teachers Local 59, a union which is entering its third week of striking for safer and more equitable schools. Vasquez stated that as a Salvadoran who grew up there during a U.S.-funded civil war, she “personally experienced what it is like to face U.S. imperialism.”

Vasquez drew connections between U.S. militarism, the tragic state of education and other human services in the U.S., and the oppression of minorities, stating, “The U.S. is the country in the world with the biggest military budget, the biggest military budget that any country has. Yet we cannot have money for our schools to function properly, we continue to close down schools, we continue to not pay a living wage to our workers. And we know that many of the workers in these lower-paying jobs are immigrants, immigrants that have come to this country because of the wars that the U.S. continues to wage around the world.”

MFT 59 educators are currently fighting for a $35,000 yearly salary for educational support professionals in Minneapolis. MPAC organizers noted that a single Stinger anti-aircraft missile costs $38,000 and that the U.S. is quick to fund war instead of education. Organizers raised $300 at the rally for the MFT strike fund.

After chants of, “We won’t sit back for another attack! We were here when you ruined Iraq!” Susan Banaszewski, a member of the Anti-War Committee, directly connected the U.S. invasion of Iraq to NATO’s current involvement in Ukraine. She spoke about the “no-fly zone” that was imposed over Iraq, saying, “In Iraq, our government claimed the no-fly zones would protect the Kurdish people; in reality, it became the longest U.S. bombing campaign since the Vietnam War and killed over 1000 civilians, even before the invasion in 2003.” Many people opposed to Russia’s invasion of Ukraine have adopted the slogan “Close the sky,” and are calling for a no-fly zone to be enforced over Ukraine. This may sound like an anti-war slogan, but as Banaszewski stated, “what [this slogan] is really calling for is for the United States to take an offensive military role in this conflict by shooting down Russian planes, or bombing Russian military infrastructure, to which Russia will retaliate, drawing all of NATO into a hot war with two nuclear powers.” This is an example of the pro-war propaganda that we are all exposed to on a daily basis due to the U.S. media’s pro-imperialist, ruling-class bias.

Mike Madden of Veterans for Peace built upon this idea, saying, “In the corporate media narrative, the war in Ukraine started three weeks ago on February 24. But the war did not start on February 24. Two months after the overthrow of Ukraine’s democratically-elected government, on April 15, 2014, the Ukrainian government launched military and paramilitary neo-Nazi operations against the breakaway provinces of Donetsk and Luhansk. This was the start of the war.”

Madden went on to describe how although we have heard extensive reports about Russia’s invasion of Ukraine, we have heard nothing about the U.S.’s role in this war. “That’s because Ukrainians, when they are attacked by their own U.S.-allied government, are unworthy victims. They do not advance the narrative of ‘America good, Russia evil.’ They are not newsworthy, they are erased,” Madden stated.

The overwhelmingly pro-war messaging of the U.S. media due to the crisis in Ukraine has posed a challenge for anti-war activists. Wyatt Miller of the Anti-War Committee summarized the situation well when he said, “What unites us in the anti-war movement, and in MPAC, is focusing on what the U.S., our own government is doing.” Miller reminded the crowd that when the U.S. claims that intervention in Ukraine, or any other country, will improve the lives of working people in those countries, we have to remember the lessons of Iraq, Syria, Venezuela, Iran, Nicaragua, Somalia, Yugoslavia, or countless other military and economic interventions.

Organizers at the event announced another protest in commemoration of the U.S. invasion of Iraq, which will be held on March 25 at the University of Minnesota Coffman Memorial Union at 6 p.m. Initiated by Students for a Democratic Society at the U of MN, the protest will demand an end to U.S. wars, and for money for education, not military aid.

From Iraq and Afghanistan to Baltimore City: The ‘throwbot’