Minneapolis referendum on policing: Vote No on Question 2 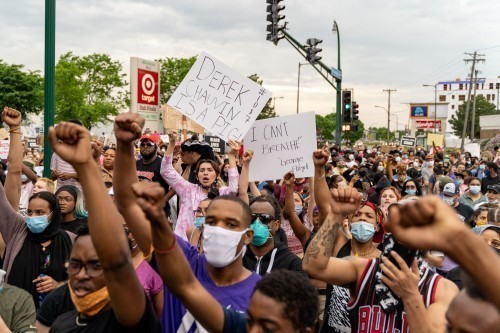 One of the massive protests that rocked Minneapolis during George Floyd rebellion.

Just last year, the halls of power in Minnesota shook when people answered the murder of George Floyd by rising up. We marched on the State Capitol, the county attorney, the state attorney general, the police federation and the interstate highways. Day and night, for weeks on end, we faced riot police, tear gas, National Guard troops and white supremacists. The Third Precinct police station was burned, as were hundreds of other buildings. And fires here sparked protests across the world and transformed the political landscape.

Today, when Minneapolis is in the midst of its first local elections since the uprising, voters will consider dozens of candidates for local office, as well as a few ballot measures.

At the top of the ballot will be the mayor’s race. As of this writing, no candidate has a clear path to beat incumbent Mayor Jacob Frey, but it’s important that he not be handed an easy victory. We can vote to send a message that he does not have support for his failures to address policing, housing, the pandemic and more. Whether you write in someone else, or if you choose a candidate who stands for things you can support, we urge people of conscience to use ranked choice voting to cast three votes against Jacob Frey.

There’s another chance to vote against Frey, in the form of a ballot question. Question 1 asks to take most city council powers and turn them over to mayoral control. Consolidating power into fewer hands would weaken the fight for working class and oppressed peoples. We can’t just leave Question 1 blank. To be counted against expanded mayoral power, voters need to mark No on their ballots.

There is also a ballot question, Question 3, related to rent control; we support rent control.

While those are easy choices. All of Minneapolis is waiting for the final tally on a measure that aims to replace the Minneapolis Police Department with a new Department of Public Safety. The new department would be under the joint control of the mayor and city council, and could still include police. The measure would also end the minimum police staffing requirement currently in the city charter.

Many good people have come out to support this amendment – Question 2 – and it’s been held up as an accomplishment of our movement. We see it as something that came from outside our movement, and which threatens to hinder the fight for real change. We’ll be voting No.

Proponents argue that Question 2 is a pathway to abolition, but also say it’s not that. A campaign website FAQ asks, “Does…it mean abolish or defund the police?” Then answers in bold type, “No. It does not.” Question 2 was born on a stage in Powderhorn Park, adorned with words “Defund police,” but it neither cuts the police budget nor requires the transfer of police funding to other projects or programs. We support investment in mental health resources, addiction services and youth programs, but Question 2 doesn’t mandate any of those.

And while we support ending the staffing requirement in the city charter, that alone does not get us the change our communities need.

First, ending the requirement does not cut the budget or the size of the police force – doing that is still a political decision. This amendment leaves that decision in the hands of the city council. The same city council that declared their “veto-proof majority” on that stage in Powderhorn Park last June and has voted at least twice since then for more money for the Minneapolis Police Department.

Second, to cut the number of cops without addressing accountability is meaningless. Take the example of Derek Chauvin, before he murdered George Floyd. He was a 19-year veteran of MPD with a display case full of commendations and medals. He would not be the first cut from a downsized police force. The only way to get rid of the Derek Chauvins is to demand accountability for someone like him, who has 26 complaints on his record and has killed five people before George Floyd. The killers of Terrence Franklin, Jamar Clark, Travis Jordan and others, are all still working for MPD, and as long-term employees, would be protected from any cuts in the force. The most direct way to ensure accountability is to end the practice of police being allowed to police themselves.

Currently, the Office of Police Conduct Review (OPCR) is responsible for reviewing civilian complaints, but no complaint gets sustained by the OPCR unless a police panel agrees. The group Communities United Against Police Brutality found that only 0.36% of complaints result in discipline (compared to a national average of 7-8% for civilian review boards). Question 2 does nothing to end this practice, nor does it open past complaints or police murders for review.

Currently, the mayor is the only civilian authority over Minneapolis police. Question 2 would change that, so that the mayor would share power with the city council. While the mayor has proven himself unwilling to rein in police, the city council has also showed us time and again that they are willing to pass the buck even on the things they can do. They have the power to address the complaint process, and have not done so. It is the city council that approves the contract with the Police Officers Federation, but they never press for changes that will protect community members. The city council has the power to eliminate the camping ordinances that invite police to criminalize our unhoused neighbors and carry out merciless evictions, despite the overwhelming housing crisis in our city, yet they have done nothing. These are just a few things that could change on a dime, if the city council were willing to take action. Yes, we need to take power over policing out of the hands of the mayor, but it gets us nowhere to put it into the hands of a body that has shown itself unwilling to make change.

Proponents of Question 2 have invited us to reimagine public safety, but ask us to vote for a proposition that will do nothing to make concrete changes that will protect us from police violence in our communities, or address the harms already done by a violent, racist institution. Some worry that the defeat of Question 2 would be a blow against the movement to end police accountability and win Black liberation. In our view, the defeat of Question 2 will be an opportunity to get the focus back on concrete changes to address the needs our communities have right now.

We will be voting No on Question 2, and throwing our weight behind the fight for community control of the police by establishing an all-elected Civilian Police Accountability Commission. Look for it in your ballot in 2022, and join the Black-led grassroots effort to get us there.