Minneapolis says no to fake ‘community commission’ on police crimes 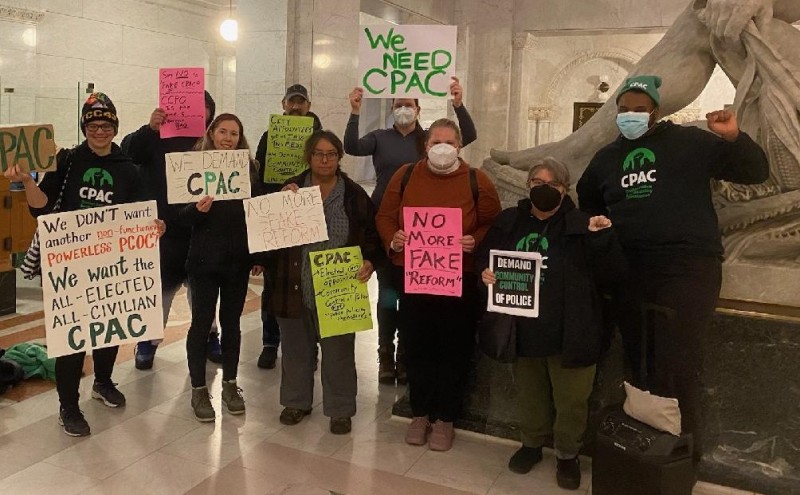 Minneapolis, MN – In early December, the Minneapolis city council will vote on a “Community Commission on Police Oversight” (CCPO). But despite the name of this proposed commission, Twin Cities activists say that this commission would do nothing to actually hold police accountable, and community members were not consulted in the creation of this proposal.

On November 28, the Twin Cities Coalition for Justice 4 Jamar (TCC4J) held a press conference to bring attention to the many problems with the proposed commission. In addition, they denounced that the actual language for the proposed commission was released to the public less than two days before a key committee – the Minneapolis city council’s Public Health and Safety Committee – voted on it.

Currently, Minneapolis has a pathetic system when it comes to holding police accountable – less than 1% of complaints result in discipline. An investigation by Communities United Against Police Brutality revealed that just six out of more than 1600 civilian complaints against MPD officers ended in discipline between 2012 and 2017. Nevertheless, the current structure of that failed entity, the Office of Police Conduct Review, would be largely left in place, but just under a new name, the proposed CCPO.

Another part of the current system is the Police Conduct Oversight Commission, which is supposed to investigate trends of bad policing – but it has not met in over seven months because the majority of the commission’s positions have been kept vacant by the city officials.

Activists say the proposed CCPO would be another toothless board that would allow officers to continue killing and terrorizing community members with no accountability.

On November 30, nearly 20 activists from TCC4J and other organizations testified against the proposed commission at the Public Health and Safety Committee public hearing. In addition to the previously mentioned issues, activists highlighted that commission members would only be paid $50 per meeting, they would be required to meet just four times per year, and information about investigations would not be available to the public.

Despite these concerns, the committee voted 3-2 in favor of moving forward with the CCPO. TCC4J members are now asking that allies contact Minneapolis city council members and urge them to vote ‘no’ for the proposed CCPO before the final votes – December 6 and likely on December 8.

Twin Cities activists continue calling for a Civilian Police Accountability Commission (CPAC), which unlike the proposed CCPO, would be an all-elected board of members with no police affiliation. These members would be required to investigate every civilian complaint and would have the power to discipline officers instead of making recommendations to the police chief. CPAC would also require that the details of every investigation be released to the public. Around 9000 Minneapolis residents have signed a petition so far in support of getting CPAC on the ballot.

Book Review Uyghurs: To Put an End to Fake News