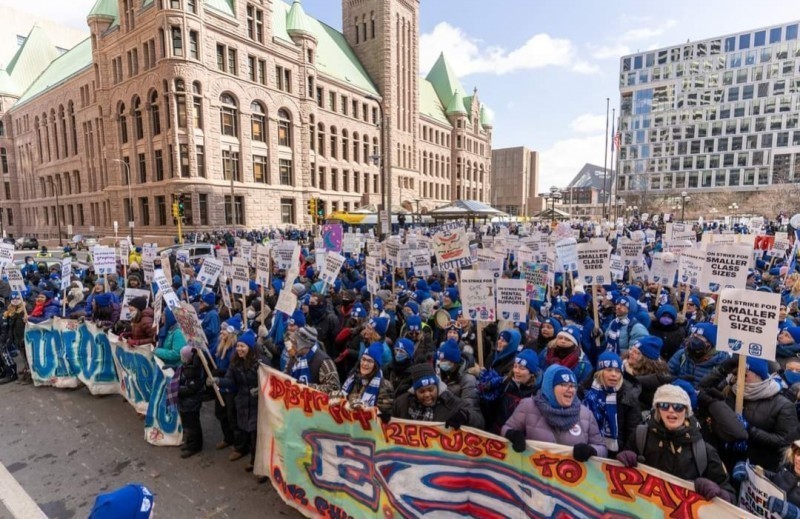 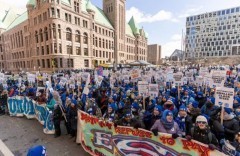 Minneapolis, MN – The Minneapolis Federation of Teachers (MFT) strike entered its fourth day on Thursday March 11 as Minneapolis Public Schools remained closed. Picket lines continued to have large crowds with many schools reporting 100% turnout to their picket lines every day of the strike, and the others reporting nearly all educators on their lines.

Each day of the strike so far has featured morning pickets at schools starting at 7:30 a.m. and a large unity action happening mid-day or early afternoon. On Tuesday at noon a large rally of around 7000 educators and supporters was held at the Davis Center where the Minneapolis Public Schools office is housed. On Wednesday the unity rally was at the Minnesota State Capitol and again several thousand showed up to hear speeches shouted from the stage to large chants from the giant crowd.

On Thursday they took the unity rally to the streets and led a mega march through downtown Minneapolis stopping along the route at the Minneapolis Foundation, which is a home to right-wing school reformers who are behind many of the policies that led to this strike. At that rally MFT Teachers Chapter President Greta Callahan spoke about the intersection of capitalism and the patriarchy with the movements to strip schools of resources and funding for educators and the students. Callahan’s speech was met with boisterous cheers from huge crowds on what appeared to be the largest march to date during the strike.

Thursday morning picket lines were again strong at the schools. After picketing Friday the educators will be knocking on doors in support of the strike. Around noon it was reported that a large crowd of teachers were descending on the MFT office to hit the doors.

At the same time as the educators have continued to maintain strong pickets and huge rallies and marches, several community support events have taken place led by Minnesota Workers United (MWU), an organization of rank-and-file unionists and organizers who work to build fighting unions and provide support to striking workers.

On Sunday before the strike, MWU led a delegation of labor and community supporters who marched on Superintendent Ed Graff’s office to demand that he meet the educators’ demands for safe and stable schools – which include smaller class sizes, mental health supports for students, equity in hiring and retention practices, and pay increases. On Thursday MWU led an action on Lake Street in South Minneapolis, with supporters from the community holding signs across the street from the educators’ evening picket at an ESL school. It was a noisy event with most passing motorists honking and waving and raising fists in support, set to the backdrop of loud chanting from the picket line and the support action.

On Friday afternoon, March 11, MWU is holding a lit drop event in the neighborhood of a school board member asking neighbors to call board members and demand they meet the educators’ demands.

As week one of the strike comes to a close, it is clear that the educators will not end their strike until their demands for safe and stable schools are met. It appears that the strike is highly likely to continue with schools closed into a second week.

Thousands of Minneapolis and St. Paul teachers march in lead-up to strike

Teachers In Minneapolis and St. Paul overwhelmingly vote to strike