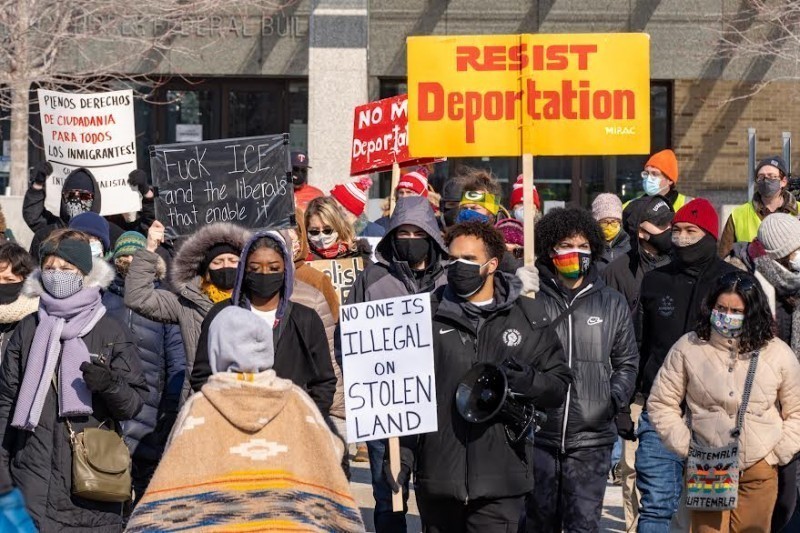 Minnesota protest demands and end to cooperation with ICE.
(Photo by Brad Sigal)

Minneapolis, MN – There have been some recent advances in the campaign to end cooperation between the largest county in Minnesota, Hennepin County, and Immigration and Customs Enforcement (ICE). The campaign has been organized by the Decriminalizing Communities Coalition, which brings together several local immigrant rights and social justice organizations.

On May 24, the Decriminalizing Communities Coalition sent a letter to Hennepin County Sheriff David Hutchinson that was signed by over 300 Hennepin County residents requesting a meeting to discuss the need to stop his department’s cooperation with ICE. The coalition was made up of members from local groups including Minnesota Immigrant Rights Action Committee (MIRAC), Jewish Community Action, Coalition of Asian American Leaders, Black Immigrant Collective, Immigrant Law Center of Minnesota, Release MN8, and Unidos MN.

Representatives from the coalition had a virtual meeting with Sheriff Hutchinson and some members of his staff on July 14. In this meeting, the sheriff announced that as of June 9, his office is no longer collaborating with ICE. He explained this as meaning no more phone calls or notifications, no more providing jail rosters to ICE – essentially no more advance notice of any kind to ICE about people being released from the county jail. ICE has stopped calling Sheriff Hutchinson’s office and now considers Hennepin County non-compliant.

In the meeting, the sheriff’s staff also told coalition members that the final step in ending cooperation with ICE was the implementation of a written administrative directive dated June 9. Perhaps coincidentally, the directive is dated just two days after the coalition sent a message to the sheriff following up on their May 24 letter, and a day after the sheriff’s office contacted the coalition to schedule a meeting.

Members of the coalition acknowledge that this is not the end of their work, but that this is a big win, nonetheless.

Issues that the coalition will continue to fight for include: the full implementation of the directive and compliance by the entire sheriff’s department, ending or restricting ICE access to detainees, more formal policies within the sheriff’s department, the passage of a comprehensive separation ordinance by the Hennepin County Board to get ICE out of all Hennepin County matters, and clarification that any grants to Hennepin County from the federal government, including Justice Assistance Grants, do not contain any conditions calling for cooperation with ICE.

The campaign to end the collaboration between the Hennepin County Sheriff’s Office and ICE has been one that MIRAC has been fighting for for several years, as this collaboration has been a pathway to deportation for far too long. Since January 2020, MIRAC has partnered with other immigrant rights organizations in the Twin Cities to pressure the sheriff’s office to end their collaboration with ICE.

Mary Vanderford, a member of MIRAC who has been active in this campaign states, “I am encouraged that the Biden administration has changed some of the egregious policies of the previous administration. But, by no means, not all. Local officials need to hear from their constituents that we are not satisfied until all undocumented immigrants receive the same rights and protections as the rest of us. No one should be arrested for a minor offense, locked up in the Hennepin County Jail and later transferred into the hands of ICE.”

MIRAC, in collaboration with the rest of the Decriminalizing Communities Coalition, will continue to fight for a full end to collaboration between ICE and the Hennepin County Sheriff’s Office.