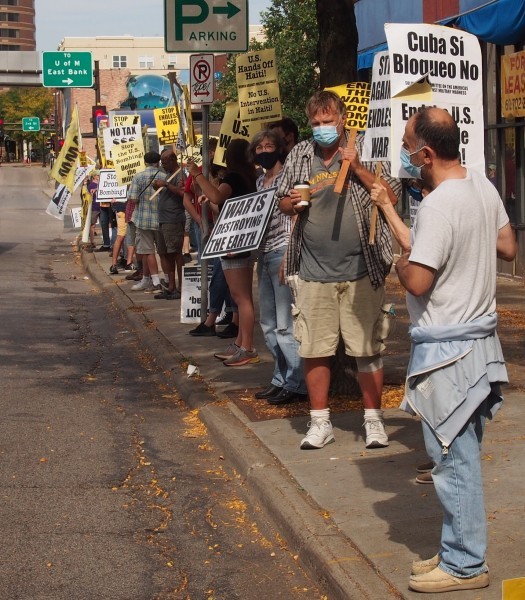 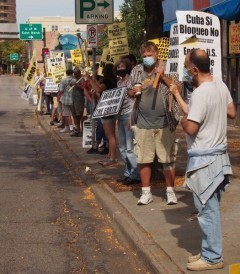 Minneapolis, MN – A coalition of Twin Cities peace and anti-war organizations held an anti-war protest October 9 to mark 20 years since the U.S. invasion of Afghanistan. The protest, held at Mayday Plaza in Minneapolis, also called for an end all forms of U.S. aggression.

Kim DeFranco, representing Women Against Military Madness and the Climate Justice Committee, welcomed the 50-plus people and explained the focus for the action, “Now is the time to end the U.S. obsession for endless wars. We demand to end all wars and all types of warfare. Bring all the troops home from everywhere, end all sanctions and stop all blockades and fund human needs now!” All the speakers addressed one of the central demands of an end to warfare, intervention and sanctions, and for human needs to be prioritized.

Misty Rowan, an activist with the Anti-War Committee, explained the significance of the role of sanctions as an act of war, “Sanctions are an act of war, and they need to be treated as such. They are cruel, and they are intended to cause harm, but unlike a drone strike, the damage done is so much more insidious than outright violence, and for that reason, so much less likely to make the nightly news. Sanctions are used to strangle countries economically and to put pressure on governments, but it is the ordinary people who ultimately pay the price. It is well documented that sanctions can cause more death and more suffering than an actual hot war, but they are sold to us as being less cruel, and more cost-effective.”

U.S. weapons and aid are another form of U.S. warfare. Mnar Adley, an outspoken Palestinian-American and editor of Mint Press News, spoke about the situation in occupied Palestine. “Muna and Mohammed El-Kurd, standing up to Israeli apartheid and the ethnic cleansing of their neighborhoods, are the real heroes of 2021,” she said. “Where are the Muna and Mohammed El-Kurds here in America, standing up in Congress, in the House, in the Senate – where are they? They do not exist. That’s why we have to hold our elected officials accountable and rely on the strength and courage of ourselves.”

Ruben Joanem of the Haiti Justice Committee held U.S. imperialism responsible for the Haitian refugee crisis, saying of the July assassination of President Jovenal Moïse that “nothing happens there without the consent of the U.S. embassy.” Joanem continued, “We need to ask our representatives to put a moratorium on deportation of refugees from Haiti because the nation has collapsed as we know it. There is no infrastructure, there is no leadership, there is no administration in Port-au-Prince or elsewhere in Haiti. The images that you’ve seen of officers chasing children and women refugees is no different from the image of the officer kneeling on the neck of George Floyd. All we are asking for: we want to breathe. The right to breathe is the right to live.”

Several speakers also made the connection between the wars abroad and the war on oppressed nationalities at home. Kelly Thomas, a member of the Twin Cities Coalition for Justice for Jamar, addressed the crowd to make this connection, “The people who are in the streets fighting for our lives, for our rights to freedom of speech, for literally clean drinking water, we are being attacked and targeted by police. We’re being assaulted and arrested. Some of us were literally in court yesterday.”

Thomas continued, “Right now, the people with the most power are mostly people who have never experienced being traumatized by police. They don’t know what being pepper sprayed or tear gassed feels like. They haven’t seen the damage that rubber bullets do. They don’t know the feeling of being jumpy at unexpected sounds, or watching traumatized community and loved ones spreading trauma because they don’t have the safety they need to heal. They haven’t had to try and sleep just feet away from police in order to hold ground. They are not interested in understanding the problem, they are not capable of understanding the problem, and they’re not capable of caring about people with Black and brown skin.” Thomas encouraged participants to support their campaign for CPAC, a Civilian Police Accountability Council, in Minneapolis.